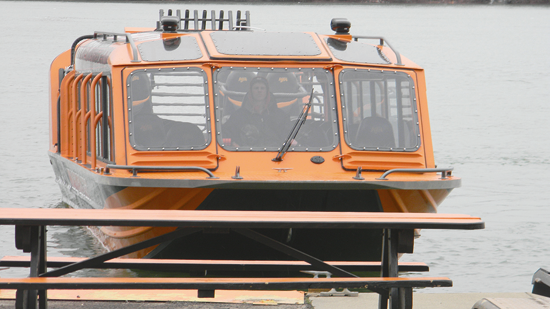 Niagara Jet Adventures has a new logo, improved boats, and a new and improved restaurant/boarding area on Water Street in Youngstown. (Photos by Terry Duffy)

An exciting new vibe is starting to be felt up in Youngstown.

Niagara Jet Adventures, a favorite of thrill-seekers on the lower Niagara, is taking a whole new approach under new owners/operators Brian and Salise Price. NJA kicked off its 2019 season over past days, with a brightened, attractive staging facility on Water Street, and a whole new, fresh way of doing things on the River Region.

Call it a new feel for the community.

NJA, as many remember, has seen its share of chapters – if you will – from its beginnings in 2012 by Mike Fox and what was known as Fox Boyz Marine to Niagara Jet Adventures under the ownership of Chris Bohnenkamp.

Brian Price, originally from Oregon, came to Youngstown and NJA via his earlier association with Bohnenkamp and Bohnenkamp’s Whitewater Customs business of Meridian, Idaho. Bohnenkamp went on to encounter a host of legal problems from his earlier ties with the operation and ended up selling the business to Price.

“He helped build the boats,” Salise said. “He came out here to work, do maintenance on the boats, and ended up purchasing it. He had a lot of time and work with the boats; I guess that’s what drew him out here, to do more work. He didn’t want to see the boats go anywhere else, so he chose to purchase the business and take over.”

From there, NJA began its new direction under Price. His wife, Salise, who joined the company last July, comes from the Toledo, Ohio, area. She said she first experienced the River Region while on vacation with her son and fell in love with it.

“Brian and I were best friends; he asked me to help out,” Salise said.

And soon, things for the better began to happen.

“I came in as the general manager in July ’18 and began making subtle changes here and there. It kinda went full swing when I moved here in mid-August. I took over and made a lot of changes,” Salise said.

As in going full circle, with a newfound appreciation – call it love – for the quality of life in the River Region.

It’s evident in everything NJA does these days.

“We have changed up, completely all of our boats,” Salise said. “(They) have new graphics, they have been completely overhauled from front to back, bottom to top. I have reconditioned our souvenir area, gift shop. It is all based on Youngstown, New York, and our business, Niagara Jet.

“Rather than bringing things in from the Canadian side, we’ve based it all (local) out of the U.S. We work with a lot of companies. Our vendors are all made in USA; that’s huge for us.”

Pointing to a new emphasis on how things are getting done at NJA, Salise continued, “We have rebranded the company, so we have all new logos; everything is pretty much new here. The look inside has changed a bit – it’s relaxing.

“I am redoing our patio for upcoming events, just for the relaxation of our customers. We have updated all of our menus in the snack area; I guess we’re going for the quick and easy options, yet we want to have healthier options, as well. We’re trying to stay away from as much junk (food) that we had before.”

She said NJA, aiming to improve upon its earlier experiences with the Youngstown and River Region community under Bohnenkamp’s ownership, chose to move forward with a new – call it embracing – approach on how it operates.

As far as upcoming projects, “For our locals, we have ‘Wine and Water Wednesdays,’ where we are going to be featuring a different local winery each Wednesday, where you can come in and do wine tastings, and you purchase the local wineries’ bottles here (from the Niagara Wine Trail). They will be available for purchase.

Still more areas in planning are an expanded use of the NJA’s riverside patio – even a return of a dockside gas station for the lower river boating community.

Salise said NJA’s staff and its boat captains all hail from northern Niagara. “All of our captains are local,” she said. “Our entire crew is now all-local. So we have a lot of our local high schoolers.

“Our boat captains – one of them, Shawn Irving, he started as a briefer (an NJA tour guide). He worked his way up and became a boat captain. We have Will Curtain, who is our operations manager; he is boat captain with us full-time. And we have Lloyd Schrack. Lloyd has been in the local fishing community for many years – amazing captain, I couldn’t speak any higher of the man.

“The captains, they are the boat drivers. Each spends about two years training for this position. All of our boat captains are trained right here on site, two years of training.” 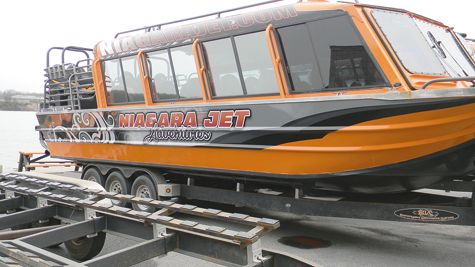 And what of NJA’s boats?

“Each of them is one-of-a-kind,” Salise proudly said, as she referred to them as “my girls.”

“Even though they look similar, each boat is one-of-a-kind. There may be a (common) design, (but) each of our boats has something different. Each is 1,650 horsepower; they house three Cadillac CTSV supercharged engines. Our captains are very proud of this. They are right now the fastest boats on the lower Niagara,” she said. “(And) they have something that a lot of people don’t know that we have. We do run all four seasons with our boats. We have enclosures for the backs of our boats, where it makes it a fully contained (experience). They are heated. People don’t know about this. We also have the option of the wet deck in the warmer seasons. Each one has a capacity of up to 38 passengers.”

Comparing NJA to other jet boat tours, Salise said the differences are many.

“First off, we’re an American-based company; that’s very big for us,” she said. “Each of our boats – what sets us apart is the fact that we have the ability to give you the option of a dry seat or a wet seat, where you’re going to get the splash. And then we have the entertainment on the boats; we have our briefers, our young ladies and gentlemen, that get out on the boats; they get your crowd dancing, singing, clapping, cheering, having a great time. Our briefers get up there and they are going to give you a history of the lower Niagara River as you’re going along. So, not only are you just seeing the sights, you get to learn about Smuggler’s Cove, the Silo, Devils Hole, you’re going to learn the history of the Power Authority. So that is something that sets us apart.

“I have never been on a trip with our competitor; this experience is what brought me here,” Salise admitted. “My son and I came here on a day trip from southern Ohio, my son absolutely loved it.”

Of the reaction thus far from Youngstown and the River Region, Salise said it’s been exceptional.

“So far, we got a lot of great response to us being here,” she said. “The local people were just (so) pleased that they were here. I’ve actually started making partnerships and friendships with local businesses such as (Anchor Spirits). We are set to become new members of the YBPA.”

Salise said NJA is thrilled to be a part of this community: “It’s such an amazing experience, because everybody that we have here wants to be personable. You have a question? We’ll answer your question. You want to take a look at our engines? Our captains love showing off their boats. … It’s the personal touch.” 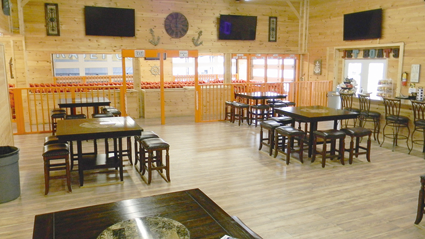