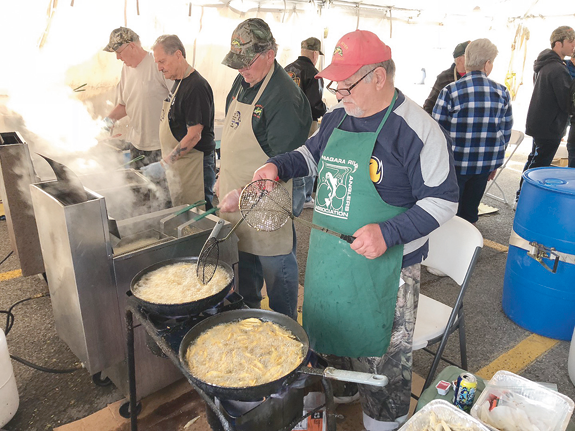 Smelt Fest a fun opportunity to sample fried fish, give back to anglers, LPD

Lewiston Smelt Festival moving to Academy Park on May 3

The Lewiston Smelt Festival is the official start of the village’s summer slate of activities. It is an enjoyable evening where, despite the weather – which is often about 55 and overcast – friends gather together to mingle, listen to live music and eat the #FriesWithEyes.

More than that, however, “This is the major fundraiser for us,” said Paul Jackson, a member of the Niagara River Anglers Association. His group unofficially launched the event three decades ago when a group of fishers got together for a waterfront fish fry. Today, the Lewiston Smelt Festival raises money to enable youth to attend New York State Department of Environmental Conservation summer camp, as well as to outfit the Lewiston Police Department’s new K-9, Shadow, with equipment.

This event is coordinated and promoted by the Niagara River Region Chamber of Commerce, and sponsored by DiMino Lewiston Tops and Modern Corp.

Tops owner Anthony DiMino stepped up four years ago when the anglers and chamber lost their smelt supplier. “I just took it upon myself to say that’s kind of ridiculous, seeing that the Niagara River Anglers is an industry that is pretty important in the realm of the Village of Lewiston,” he said. “We are a fishing town. We’ve been a fishing town for a long time, and they needed our help. They needed the support of somebody. I came forward voluntarily, walked right over to the chamber, and said, ‘I’ll be happy to give the smelt to you for free.’

“That helped greatly, obviously, because it’s worked out for having the Smelt Fest that last couple of years.”

DiMino has donated $3,000 each of the past three years. The bulk of the money goes to purchase the smelt, while the remainder is given to the anglers.

“I’m a fisherman. The Niagara River is one of, probably, the greatest fisheries in the United States. So, we need to make sure we capture those monies to make sure that we have a viable village now and 100 years from now.”

DiMino said it’s his hope others will consider giving back to the anglers.

“I think people tend to forget that, at Smelt Fest itself, they do not charge for having a dish of smelt. They ask for a donation,” he said. “I know the River Anglers Association is embarrassed to actually say that it would be easier for me to just give them the $3,000 and not have Smelt Fest. And they would actually make more money. We actually do need to be giving a donation for them, so they can actually use it to have the stocking pond taken care of for themselves, and all the other things that they want to do with the donations. So, hopefully, people will get the word out that the little box that says, ‘Donations appreciated,’ means ‘Please give every time you walk over there.’ Put some money in the jar. It would be appreciated.” 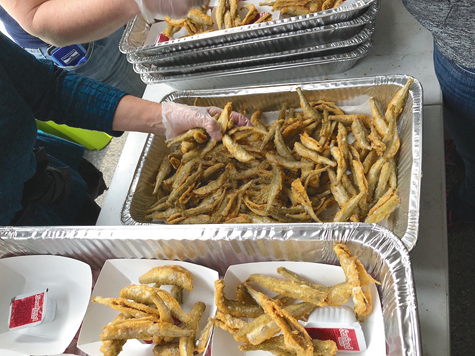 For those unfamiliar, Jackson explained, “Smelt is an ocean fish. It came into the Great Lakes through the seaway many, many years ago, found it to their liking, and are able to spawn in our local creeks and rivers. And do quite well. We don’t have them in Lake Ontario like we did; I believe a lot has to do with predation from the salmon that we put in.”

About 30 years ago, when smelt supply was greater, “It started out as a small gang down on the dock; a few guys cooking some smelt that they’d caught right away,” Jackson said.

Though smelt are still available locally, there is a catch limit. The Smelt Festival often goes through 400 or so pounds of the fragrant, tiny gray fish. As such, “These are commercially caught. Cleaned. We buy them from a local vendor like Tops here, and then go ahead and process them, deep fry them and hand them out for donation purposes,” Jackson said.

Former Mayor Richard Soluri was one of the first to recognize the importance of smelting to the River Region, and the potential for showcasing local fishers and waterways via a community event. The Chamber of Commerce was brought on board, and the Smelt Festival was born.

Smelt Fest on the Move

“It’s just kind of expanded; you know, back in the day when the Chamber of Commerce got involved, it became a party. But we still continue to do the cooking, and we put out a donation jar,” Jackson said.

The Smelt Festival, traditionally held on Water Street, this year is moving into Academy Park. It will begin at 5 p.m. Friday, May 3.

“The move to Academy Park was necessary due to limited event space at the waterfront,” Chamber of Commerce President Jennifer Pauly said. “With renovations to the park area of the waterfront, the festival tent had to be relocated to the adjacent parking lots the past three years. The board of directors, after careful thought and planning, decided to move the festival to Academy Park.”

As always, the anglers will fry the smelt, while Chamber of Commerce volunteers and local dignitaries will pitch in and hand out free samples.

Other foods and beverages will be available for purchase at the event. There will live music by The Tim Britt Band, and appearances by Smelt King Ken Scibetta, co-owner of the Griffon House. A smelt eating contest is slated to take place, and more vendors are expected to participate.

One of the concerns with having this event on the waterfront is parking – really, it’s a lack thereof, as the festival has inhabited the main lot. Motorists shouldn’t have that problem this time, as they can find a spot around the Academy Park periphery or, for a $5 donation to Boy Scout Troop 855, park on the grounds (weather permitting).

Lewiston restaurants also will offer smelt specials throughout the weekend, while Tops will have smelt available for purchase. Participating eateries serving smelt, and businesses with promotions, will be identified by a decorative fish flag outside the front door.

“We are lucky to have sponsors who understand the importance of this festival,” Pauly said. “We are able to celebrate the anglers and the work they do to stock our local ponds, lakes and rivers, and continue their programs for the youth. The chamber helps to facilitate the event; however, it is the donations that come in that help keep the anglers’ programs and mission to continue in this region. We are grateful for everything from the garbage cans and restrooms donated, to the smelt ordered and ready to go.

“This year, our event manager, Caitlin Fager, with the help of our events committee, added new components to the festival that will add to the fun.”

For more information, contact the Chamber of Commerce at 754-9500 or visit www.NiagaraRiverRegion.com. 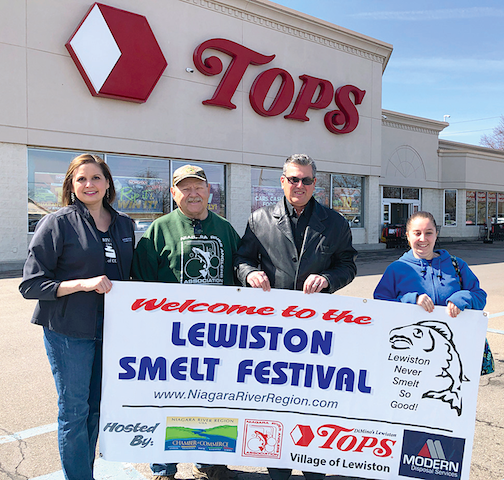