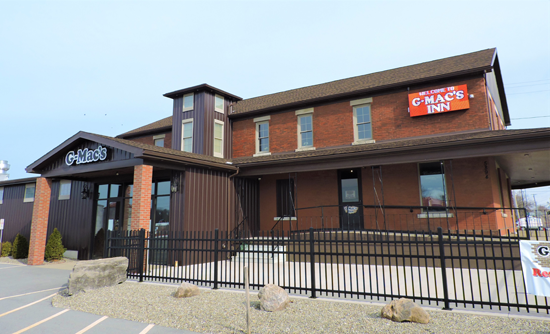 The event begins with a cocktail hour followed by a sit-down dinner and awards program. The chamber board of directors will then present awards to Business of the Year and Citizen of the Year honorees from the Lewiston, Youngstown, Ransomville and Sanborn communities. In addition, a silent and basket auction will take place.

The Niagara River Region Chamber of Commerce is pleased to announce G-Mac’s Inn as the recipient of the 2019 Sanborn Business of the Year Award. The restaurant has grown quickly over the past two years, revitalizing a historic building in Sanborn and bringing new business to the community.

Owner Gary Macri has been in the restaurant business his entire life. His family has been serving generations of Western New Yorkers homemade food for almost 70 years. Prior to the Sanborn location, Gary owned and managed Macri’s Italian Restaurant, which had a 38-year run in Niagara Falls. This was followed by a few years in Wheatfield at the Summit Park Mall in 2005, and in 2010 in the historic Clarkson House building in the Village of Lewiston.

G-Mac’s Inn will celebrate two years in Sanborn this June in the former Marlboro Inn location. Gary looked at the property years ago right after a fire had consumed much of the building. He could see the potential, but knew a lot of work was going to have to go into bringing the building into a functional restaurant and banquet space that would work for his business model. Major renovations took place inside and outside, including a complete overhaul of the kitchen and repairing a giant hole in the floor.

The renovated building now boasts a large banquet room upstairs, a full kitchen, dining room, bar and accessibility for all, including an elevator. The parking lot now holds 100 spaces, with plenty of room to handle the normal restaurant flow and banquets.

This renovated space also allows Gary the ability to schedule live music, something he was not able to do at his previous locations. Digital signs were added outside to promote entertainment and events. Four flat-screen televisions were also installed at the bar, which has increased the bar business and enhanced the atmosphere.

G-Mac’s employs approximately 20 people. The most recognizable employee is Gary’s mother, Anne Macri. At 89 years young, her smiling face is the one everyone sees at the door. She has a special candy drawer that many young families know about. She sneaks handfuls of candy into young children’s hands as they leave after dinner.

Another longtime employee, Ed McGinley has worked in the kitchen for Gary for more than 40 years.

The menu and word of mouth has been the best marketing tool for the business. G-Mac’s has all of the pasta favorites people know from Macri’s, along with an expanded menu featuring burgers and wraps. The bestselling items continue to be the veal and chicken parmigiana dinners, and, of course, the gnocchi.

Friday night is a popular night for dinner. G-Mac’s fish fry is a huge draw in the community with a line out the door.

Gary loves being in Sanborn. He still sees familiar faces that will take a ride to the growing hamlet to dine, but the restaurant has also grown a new customer base in the past two years. He loves the people in Sanborn – who are down home, and sincere.

The addition of G-Mac’s to the Sanborn business district has helped increase traffic and bring a new group of customers to the area. People love having a large, full-service restaurant in the community.

G-Mac’s has supported many organizations, schools and nonprofits in the region, including the Sanborn Business & Professional Association.

G-Mac’s is located at 5894 Ward Road. Find its menu online at www.gmacsinn.com.