All is quiet at Lewiston Town Hall, with select town officials scheduled to visit the annual Association of Towns meetings in NYC next week.

On Monday, it was a few announcements of interest and some financials being the newsmakers at an otherwise “low-key” Lewiston Town Board work session.

•Lewiston Police Chief Frank Previte informed Town Board members of a few developments with the department. He said LPD would be taking part in a series of shooter drills. Two took place Friday on the Lewiston-Porter campus, and another is scheduled next month on the Niagara-Wheatfield campus.

“We’re doing active shooter training (with) some other departments and fire/EMS (Friday) at Lewiston-Porter. So it’ll be a busy place for a little bit,” Previte said. “Also, we’re doing something that I know has never been done in this part of the state. So, we have a lot of people watching what we’re going to be doing.”

According to a Lewiston-Porter advisory, the drill was one of the first in New York state to utilize a full spectrum of emergency services. Participants included the Lew-Port district transportation department, the Niagara County Office of Fire Coordinator and Emergency Management, local police departments, the U.S. Border Patrol, area fire companies and Mount St. Mary’s Hospital staff.

“We have staff members who will be made up at 7:30 a.m. to reflect the wounds they have received,” said Dr. Patricia Grupka, assistant superintendent for administrative services at Lewiston-Porter. “This exercise is intended to stress the system, to see how our district, St. Mary’s Hospital and local, state and federal emergency responders will react to a situation if an unfortunate circumstance occurs at any of our schools. Our primary focus is always on the safety and well-being of our students and staff. After the drills, a debriefing will be held to help us focus on future trainings and corrective actions with our staff.”

The LPD Lew-Port drills took place from 9-10:15 a.m. at the Primary Education Center and 10:30 a.m.-noon at the high school. Lew-Port students had the day off, while staff was expected to be on campus. 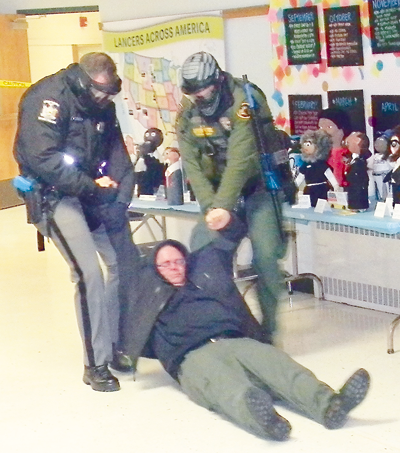 •In other LPD news, three hires were named as part-time officers. Joining the department are new officers Mitchell Pagen and Andriano Medici, plus Michael Milbriand, a retired lieutenant from the Tonawanda Police Department. All three will join the LPD on Feb. 18.

“They all are open positions that we have not already filled,” Previte said.

He noted the move was expected to address some overtime hours the department had been contending with, with greater staffing needs expected for the warming months.

‘They’re all very good candidates; one is a retired lieutenant that lives in the town from the Town of Tonawanda (Police Department),” Previte said. “He was on their SWAT team, was a lieutenant. He’s somebody who’s not going to go anywhere; we’ll do well to have his (expertise).”

Previte said Milbriand would also assist LPD training of new officers due to his background as a firearms instructor, a general topics instructor and a field-training officer.

Town Supervisor Steve Broderick, who served earlier with the Niagara County Sheriff’s Office, spoke of the training difficulties with new officers. He praised the new appointment of Milbriand.

“When you get a guy ... who’s willing to work and continue to work, (it helps),” Broderick said.

•The Town Board reported it signed off on a health care insurance agreement with LPD Capt. Josh Cain, who had encountered some financial stress with his plan following a recent promotion to the rank of captain.

He explained the health care agreement totaling approximately $2,392 would only cover Cain, and that it had met with approval from all Town Board members and Attorney for the Town Brian Seaman.

•The Town Board gave its approval for the town to pursue $100,000 grant with Empire State Development on behalf of Artpark & Company. Once secured, the funds would go toward creating a new master plan for Artpark’s future.

“Artpark has embarked on a journey to create a new master plan and significantly improve its facilities and broaden market appeal to ensure future viability, and will serve as the design of physical layout at the largest scale for Artpark’s forthcoming development, including a plan for its timing and phasing,” read the Empire State Development description of the town application.

“Sonia Clark from Artpark came to me last year, and she had an idea for an Empire State Development grant that can only be obtained by a municipality,” Broderick said. “She asked me if we would support Artpark’s grant.”

Broderick said there was nothing the town would qualify for under the grant and, following board conversations, all members gave their support. “Sonia Clark went ahead and put in for it; she was awarded $100,000 from Empire State Development.”

“It’s a way of supporting Artpark; it doesn’t cost the town anything financially,” Broderick said.

•Town Budget/Finance Officer Jacqueline Agnello presented budget revisions for board approval covering 2018 and 2019. Included for 2018 were: PiP engineering, $5,000, to cover both the expense and revenue budgets, with revenue paid by the applicant and the town paying the invoice; safety inspection/equipment budget, $1,448 to cover office equipment; Sewer Department, $10,705 to cover 2018 gas/electric expenses. For 2019, Highway Garage equipment budget, $4,000 to cover the purchase of three new computers for software upgrades; and fire inspection equipment budget, $525, to cover computer expenses.