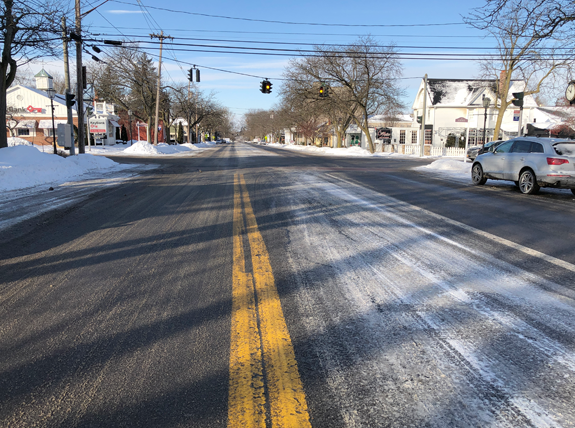 Center Street was fully navigable Wednesday morning, thanks to the work of the Village of Lewiston Department of Public Works. Also shown, below, is a portion of North Fifth Street.

As snow-covered roads were prominently featured on local TV news stations Wednesday morning, residents in the Village of Lewiston woke up to a very different site.

“An easy drive into work today, and the village was out clearing sidewalks before 8 a.m. Thank you!” Niagara River Region Chamber of Commerce President Jennifer Pauly posted on Facebook.

Indeed, the Department of Public Works crews were out working Tuesday night and early into Wednesday to ensure the municipality was traversable.

“We started, basically, last night after we had a heavy snow at about 7-7:30 come through, and shortly after that we have a truck on the road already – just prepping,” DPW Superintendent Terry Brolinski said. “We got a chance while we still had the warmer temperatures to get some salt down. So, our roads were breaking up overnight while temperatures were falling.

“This morning, we had crews out at 4 a.m. Basically, our primary route, the hill route, was pretty well open. We just had to push back some drifting, and just some shoulder work. Side streets were our main attention; parking areas; and we got through them pretty quickly.”

“We're very fortunate to have a snowblower that’s heated inside,” Brolinski said. “It's also our mower, and it's a heated cab, to protect our personnel. It's really nice. And we had a safety vehicle behind that.

“By 10 o’clock, we had the sidewalks open for anybody that really wanted to brave this weather and go for a walk.”

Brolinski said his team was already preparing for whatever weather comes on Thursday.

“We've been prepping for tomorrow all day, and we've been watching the roads. Most of the personnel have been inside, just working on vehicles and going over everything and anything we can go over that could possibly go wrong on a vehicle for us.

“We're pretty much ready for whatever Mother Nature wants to throw at us.”

Mayor Anne Welch said, “Our DPW does a great job.”

She noted, “It’s too cold for anyone to be out for any length of time, (but) they will be picking up garbage tomorrow – rotating the men so they don’t get too cold.”

At the Jan. 22 Village of Lewiston Board meeting, each trustee thanked Brolinski and the DPW for snow-clearing efforts during the previous weekend's storm. 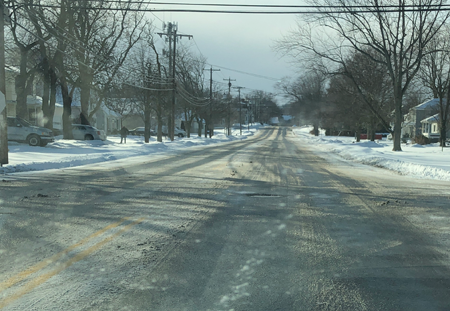 Thanks to town, too

The Sentinel would be remiss to not credit the Town of Lewiston Highway Department for its efforts to keep roadways open and side streets clear throughout the recent snow/freezing cold/ice events.