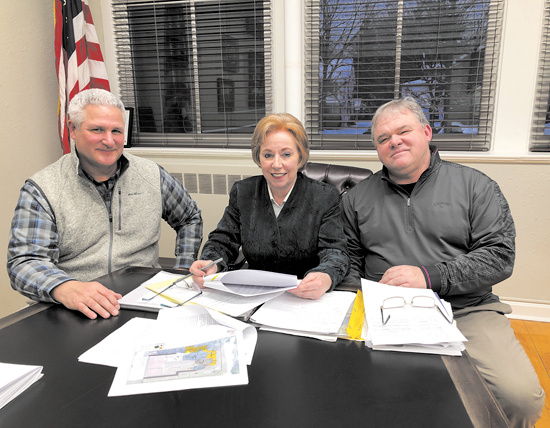 “We look forward to being part of the team,” said Jeffrey Salvatore, chief estimator and senior project manager for Mark Cerrone.

Mayor Anne Welch said, “I think it is amazing that they are offering to take on this project as general contractor, and donate their time and services. They will also solicit and coordinate the other contractors to help with the project. This will help reduce the cost and make it more affordable for us to build this wonderful, all-inclusive playground for children of all ages and abilities.”

“Founded in 1999 … we specialize in the highest-caliber quality construction services throughout the Western New York region.”

John Toscano will serve as the day-to-day construction supervisor. He also is a senior project manager with Mark Cerrone.

Welch said, “It’s great to have local people like (owner) George Churakos, Jeff Salvatore and John Toscano step up to help and give back to their community, and we are so grateful that they want to be involved in this project.”

Salvatore said Mark Cerrone would work out deals with subcontractors to try and save the municipality money. The playground project’s cost is almost $700,000.

“We’re going to figure out a way, between us and all of our contractors. We’re going to treat it like a construction project; and we want to build it.”

Mark Cerrone’s involvement could save the village upward of $100,000.

To date, about $10,000 has been received from private interests.

Welch said, “People in our community really step up to help with a project like this, because it is so worthwhile.”

She is working with elected state leaders and government organizations to secure additional grants.

In addition, the playground committee is exploring fundraisers and online donation portals.

The inclusive park will be located behind the Red Brick Municipal Building. It will include an assortment of swings and seesaws that can be used by children with limited mobility or in wheelchairs, as well as: shaded rest areas, treehouse-type structures, and small climbing walls. The plan also calls for a zipline and a splash pad.

Each piece will be situated atop of special safety flooring.

Parkitects is designing the playground.

Jason Evchich came up with the vision for the original Mason’s Mission site in Pendleton as a means to provide play opportunities for his children, Mason and Matthew, who each have hypomyelinating leukodystrophy.

As the park came to life, it became a way to teach others about inclusiveness, and to break down walls between families with able-bodied children and those with – as Evchich calls it – “limited-edition” kids.

Welch said, “If you think of a playground and children playing, think of a (special-needs) child that can see all of the other kids playing through their eyes. And they look at these kids running and jumping and playing. And, like Jason’s children, they can’t do that. They can see it, they can think about it, but they can’t do it. When you think about it through a child’s eyes, you really want them to be included.

“One of the good things about that,” happening at a place like Mason’s Mission, “is when they are included, they’re playing with your kids. And your kids see them as equals. They’re like, ‘Oh, so and so came to play today.’ … They don’t see them as handicapped. … They accept them, and they want to play with them. And that’s what you want for your children that don’t have disabilities: You want them to include these children at all times growing up.

“They become better adults because of it.”

Welch is targeting a summer opening for the playground.

A construction schedule has yet to be announced. 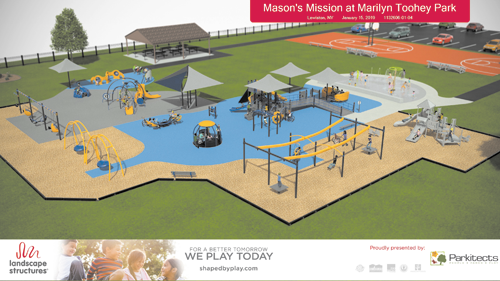 This is an excerpt from Mayor Anne Welch’s recent letter:

For those who are ready to make a substantial financial commitment to this project, a special opportunity exists. Through these leadership levels, you have the opportunity to commemorate someone special, a family member, friend or person of inspiration. Below are some examples of possible naming opportunities at the new park. Would you please consider donating at one of the leadership levels?

•Names and logo on a signature space, or a particular piece of equipment

•Names on a smaller piece of equipment

•Name a bench, tree or other designated items

•Non-tiered donations in any amount are also gratefully accepted.

Donations are payable to the Village of Lewiston.