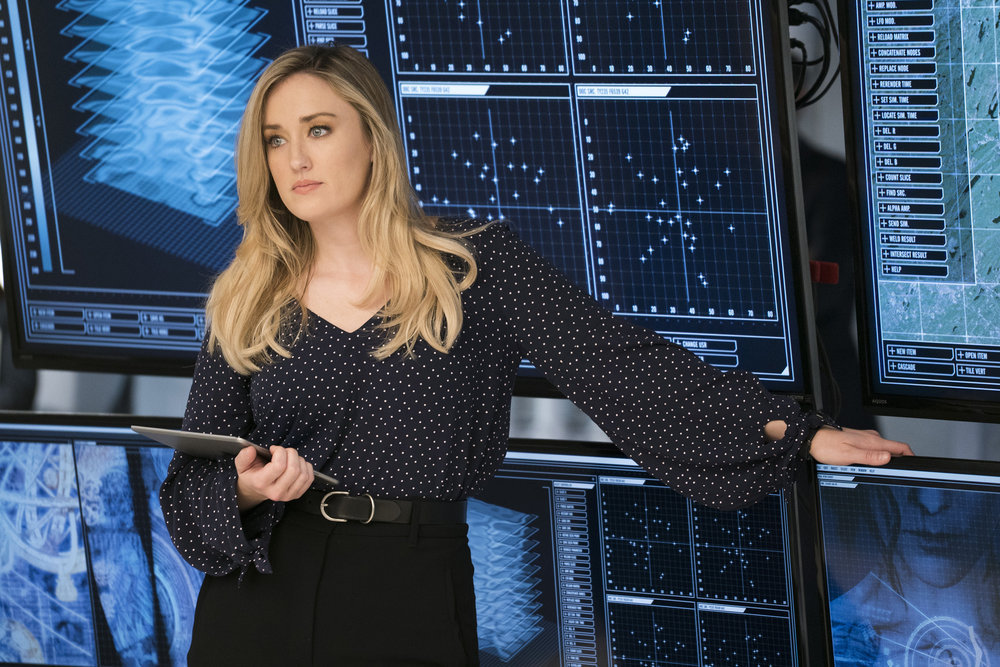 Behind the Screens with @JoshuaMaloni

NBC’s “Blindspot” gave fans a pre-Christmas gift in the form of a midseason finale stocking-stuffed with story setups normally reserved for the season-ender.

•Jane (Jaimie Alexander), who had reverted back to her evil half, Remi, was able to free her mother, Shepherd (Michelle Hurd), from a black site. With ZIP poisoning threatening her life, and visions of her dead brother, Roman (Luke Mitchell), becoming more prevalent, Remi hoped Shepherd could help find a cure.

•Weller (Sullivan Stapleton), meanwhile, was desperate to save Jane – even if it meant fighting Remi.

•Back at FBI HQ, besties Patterson (Ashley Johnson) and criminal-turned-ally Rich Dotcom (Ennis Esmer) seemed to have some semblance of a cure – thanks to the mythological Book of Secrets.

Puzzle pieces will continue to come together – much like Jane’s tattoos – when “Blindspot” returns at 8 p.m. tonight (NBC, WGRZ-TV Channel 2).

Johnson chatted with BTS on Friday, offering insight on her part as Patterson, the one-named computer wizard, comic relief and general glue holding this beat-up, rag-tag group of FBI agents together. When the actress began this series, her role could've been that of a walking Wikipedia. Instead, she's created a character who is an essential piece of the team - and of "Blindspot's" overall popularity.

Q: For me, it’s been an interesting TV season. I’ve been dropping a lot of shows because it’s just the same thing every week, and there’s no progress being made with so many of these storylines. But I’ve really been enjoying “Blindspot.” I feel like, this year, things have really been escalating at a rapid pace. It’s been great for me, as a fan and a writer. How has it been for you as an actor?

Ashley Johnson: You know; I’m kind of the same way.

Maybe at some point, with a fourth season (for “Blindspot”), most shows probably wouldn't take as many risks. I feel like the writers sort of come up with storylines for each episode where they try to do something new and something different. And it constantly surprises us in the best way.

Like, I just read episode 17 of this season, and it's probably my favorite episode that we've done. Just on the page, it’s incredible. I can't wait to see it done. I feel like I haven’t seen anything like this done in a television show – and it's not even necessarily to say that it’s big, flashy action sequences. But they really push themselves and really try to do things that are a little bit off the beaten path.

I’m glad that they do that, because it keeps it fun and, hopefully, interesting for the viewers, that it’s not the same sort of monotony, of crime of the week. Not that there’s anything wrong with that. But I do know they want to try something a little different, and I’m glad that they sort of give us the opportunity to do that.

Q: Patterson is such a great role, and she's such a key component to the storyline, and to the team – and I love how you bring the comic relief. There's just so many good things that Patterson brings to the table. I feel like, in the hands of lesser writers – of lesser showrunners – that maybe she would have been lost in the shuffle. Maybe she would have just been a background character?

Did you know when you signed on for this show that it was going to be as good a role as it is? What sort of confidences did you have coming into this part, that it would be what it's evolved to be?

Ashley Johnson: I think that the thing with signing on to be on a show – especially with a network show that could possibly be 22 episodes per season – you just never know what they're going to have your character do most of the time. You very well maybe get lost in the shuffle and, you know, especially with a character that’s sort of the lab tech that has to be on each of these shows to sort of give the information to the audience.

They definitely try to make that a little bit different. I think the writers, and (showrunner) Martin Gero, they really try to take a little bit from each of us to make the characters feel real. I think they really try to let everybody have their own voice and, you know, you can even see that on the page, that they know the way all of us speak; and they try to put us in weird situations. I'm really thankful for them, for giving us the freedom to be able to do that as characters and as actors. 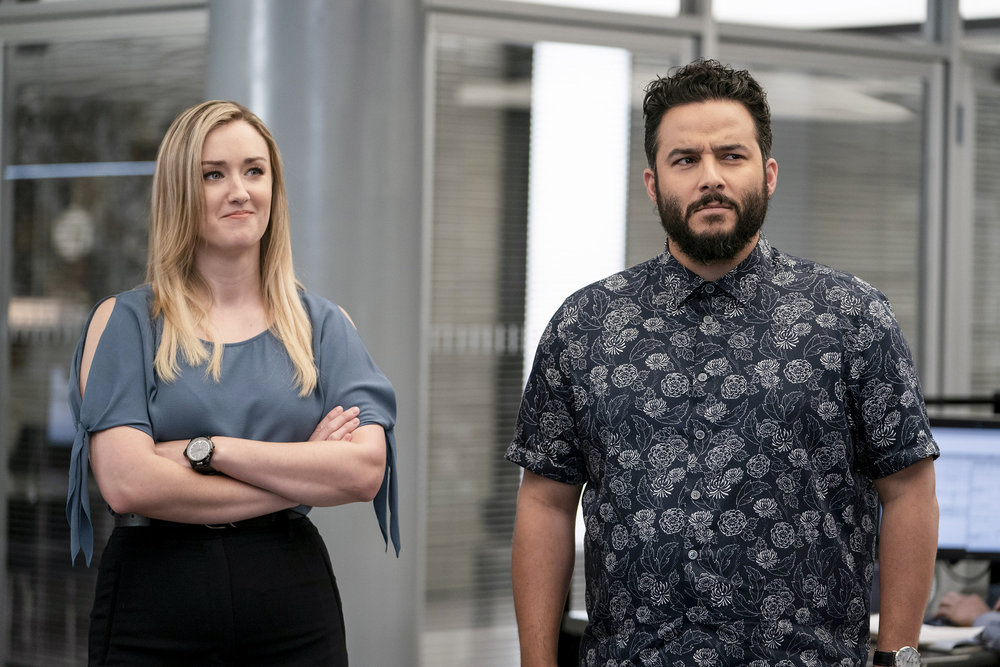 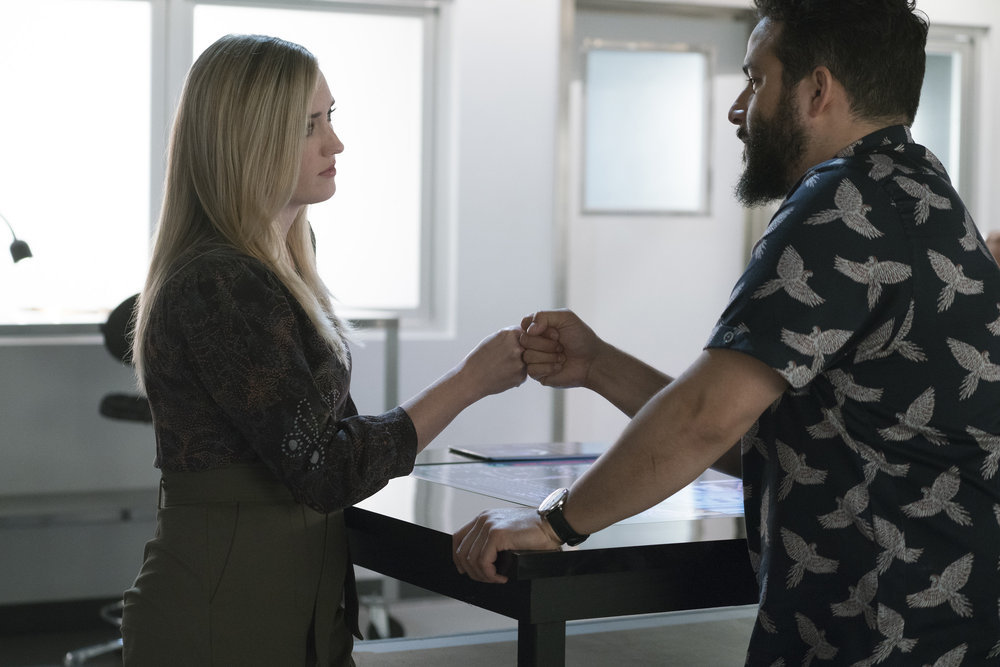 Ashley Johnson: Well, I think Patterson and Rich have a very funny relationship, because I think they, in some ways, could not be more opposite. I've said this before and I think it's very apparent on the show: Patterson is very type A; she's very organized. Everything has a place. Rich is completely the opposite of that, and I think he complements her, and they complement each other in the best way, and bring the best out of each other.

And for me, personally, Ashley and Ennis, it just so happens that we both adore each other, as well. I love working with him. Whenever he was on the show and he was just recurring or guesting, he would just sort of reinvigorate all of us, because he brought so much life to the character. And now that he’s a regular on the show, I feel like he challenges me as an actor. And he tries so many different things, where it just feels so fresh and new and fun.

And you know, 22 episodes of a season is a lot to do, and you can feel stuck sometimes or maybe stale. And I think it’s been so great working with Ennis, because he really pushes against that. He’ll get me out of me head, most days. “Hey, let’s just do something we haven’t done yet!” I’m like, "Oh; OK, OK, OK.”

It’s just fantastic. He’s just so great to work with, and so giving as an actor. I’m just so glad that he’s on the show full-time right now.

Q: It's been fun to watch you guys interact on screen.

The show is coming back tonight and there's obviously a lot going on. There's not a lot of series that have as many cliffhangers at the midseason break as what you guys gave to us. What can you sort of tease as far as what we're going to see when you come back?

Ashley Johnson: We're at the point now where we have to deal with the Remi situation. We, as a team, sort of come up with something that could possibly work, but of course it's extremely dangerous. And in the process, we don't necessarily know what the outcome could be. But, because she's having so many side effects and already is getting to a point because of the ZIP poisoning, where, you know, she might not live much longer anyway, we have to try anything we can.

Q: Obviously the tattoos have been a big part of the show from the very beginning, and there’s sort of a whole mythology involved with that particular storyline. We know that's going to continue. But I'm wondering, what you can say about the Book of Secrets? Might that be something that plays more of a role beyond just finding a cure for Jane as we continue this season?

Learn more about "Blindspot," and catch up on past episodes, at www.nbc.com/blindspot. 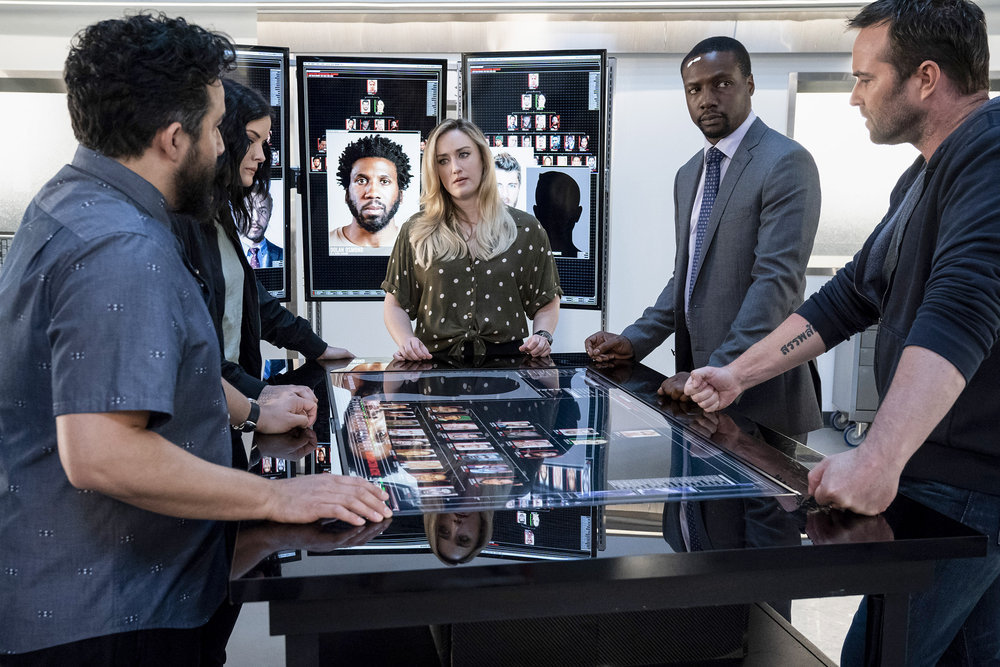 The team tries to figure out a way to save Jane … who’s slipped back into being Remi. From left: Ennis Esmer as Rich Dotcom, Jaimie Alexander as Jane Doe/Remi, Ashley Johnson as Patterson, Rob Brown as Edgar Reade and Sullivan Stapleton as Kurt Weller. (NBC/Warner Bros. photo by Virginia Sherwood)