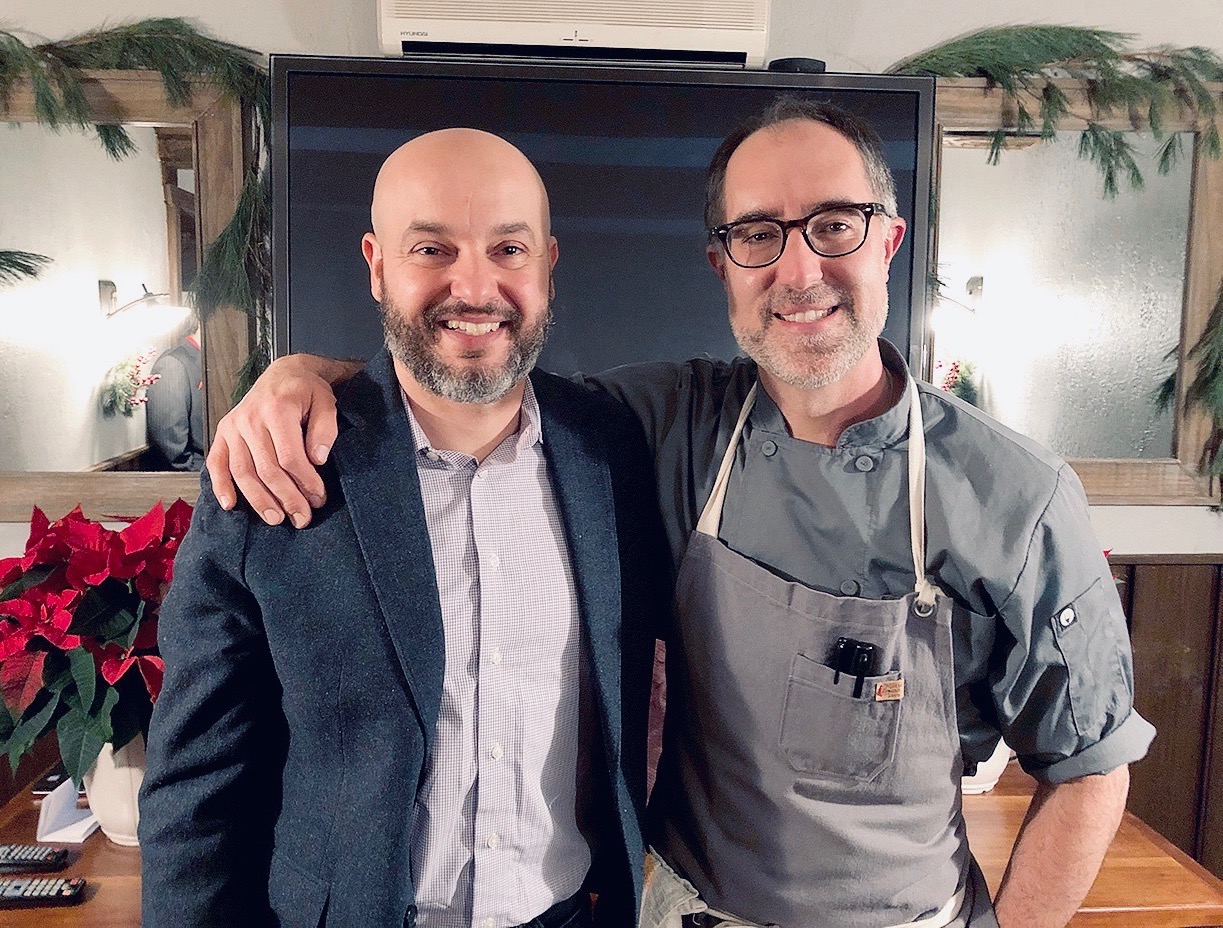 Alessandro Renzi, left, and Carmelo Raimondi are shown following a special screening of "Carmelo's: The Show" last weekend. The audience - and the snacks - are shown below.

As people took their seats last Saturday, the lights dimmed, the popcorn was passed, and the show began.

Audience members laughed; they cheered – it could’ve been a typical night out at the movies … but it was at Carmelo’s Coat of Arms in Lewiston.

The farm-to-table restaurant was screening – get this – “Carmelo’s: The Show,” a one-part sitcom, one-part cooking show concoction thought up by marketing guru Alessandro Renzi and chef Carmelo Raimondi.

A pilot – or first episode – was shot locally over six months, starting last March. The storyline’s concept is this: a real cooking demonstration shot within a scripted tale.

On this night, the main dish served on screen, porchetta, also was prepared for about three-dozen guests.

If only the Food Network could be so accommodating.

This novel concept is one the creators hope to replicate – whether through additional episodes on a platform like Netflix, or maybe just through cooking classes. 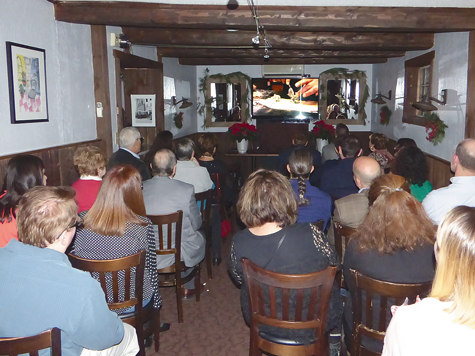 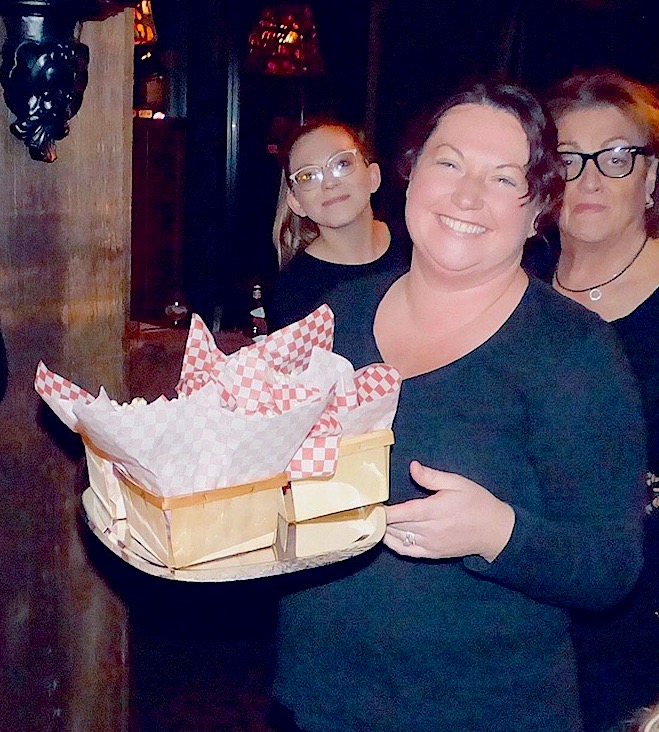 Today, social media, video and online marketing strategies are commonplace. “So, what I was thinking eight years ago, ‘OK, if everybody is going to be doing this in five, six years, then there’s going to be so much content out there. How do you make your content really standout?’ I thought about this whole principle concept, what I call ‘mega content.’ What if you create content that’s like 10 times bigger, bolder, right? What if you create a sitcom around your own business?”

Renzi blended together an eccentric cast of characters – including himself and local actors Sara Jo Kukulka, Lee Stevens and Isabella Renzi (Alex’s daughter) – with a family story, Western New York backdrops and a step-by-step cooking demonstration.

“That was the whole idea of this, to create this TV pilot; and it’s really more of an experiment for us right now,” Renzi said. “It’s just kind of see what it would lead to. But the whole idea is what if you create this mega content, which is actually a sitcom that, in a way, it sort of highlights the business, but it’s really telling an entertaining story at the same time. Not necessarily selling you the business.”

Raimondi said he was nervous to try his hand at acting, but, “You know, every once in a while, you have to step out of your comfort zone. And I felt this is an opportunity not only to showcase what Alex is as a talent, with his knowledge of directing and acting, and screenwriting, but he had a vision. And I was in his vision. So, over time, we discussed what was happening in my life, and his life.”

“I’m not an actor,” Raimondi said. “It’s a whole-new respect for actors, because I had to learn about timing. I had to learn about – just everything. I mean, you look at something and you’re like, ‘Oh, that’s easy.’ Well, it wasn’t. It’s easy to make a pasta dish, for me, but to act, it’s a whole ’nother ballgame.

Raimondi was diligently working (cough: hiding) in the kitchen when “Carmelo’s: The Show” was screened.

“My nerves were going. I mean, right now, I’m a little nervous just to see the reaction, because me watching myself, it’s a little … weird,” he said. “So, that’s why I’m in the kitchen. But, all in all, it was a great experience; and hopefully this could lead to something else, whether we do something with a cooking show, of sorts, bringing people into the restaurant; I don’t know. Something.”

Why? Because, “I think the art of entertainment, like in the restaurant business … has gone – like the flair of it. So, I don’t know. This could lead to something else positive, and that’s basically why we did it: to have fun. Life’s too short.”

Renzi said, “The idea of the show is that we’re really trying to get three messages out. In the first episode, the pilot, it definitely gets the first message out and a little bit of a second; third one is kind of more subtle. But the first message is how cooking brings people together, and how cooking really brings people together as a family. Right? So that’s kind of like the main message. The second message is sourcing your food – the whole farm-to-table, where you’re getting your food, things like that. And the third message is the beauty of Western New York.

“So, we start highlighting some businesses here, like Anchor Spirits up in Youngstown. DiCamillo. You’ll see them in the background – and it’s subtly done. It’s not like in your face. It’s really subtle. But the idea is that, if this actually catches on and somebody wants to really buy the concept, the whole premise would be that we would shoot all over Western New York – and also invite other chefs as guest chefs to do the cooking show section of it. Because the whole idea – the third message – is to really promote Western New York.”

For Raimondi, he saw this event as a new opportunity for patrons. As he put it, all diners typically do is pick up a menu and order.

“They don’t know what actually goes on in the back of the house,” he said. “I mean, you see these shows on TV … but to actually see the number of steps it takes to produce a dish, I think it would be a newfound appreciation of what chefs and cooks do for a living. Because I don’t think a lot of people really realize it.

“Do they care? Maybe not. Maybe they do. But when you sit down at a table and order that food, and you know in the back of your mind what steps it takes to get that dish, you’re going to enjoy it even more. ‘Oh, this is just delicious, and the chef, he went to this farm. He went here or there.’ It just makes it for the flavor to taste so much better, instead of just like throwing food out and, ‘Here you go.’ ”

With an event like the one held last weekend, “There’s more integrity,” Raimondi said. “There’s more passion. There’s just more life to the dish, because there’s a story to that dish. Just like our lives. There’s a story. And so, that’s why, with this story, it kind of bridged every gap that we had in our lives at this point.

The dinner screening at Carmelo’s sold out in about 90 minutes. A second showing is set for Jan. 12, but seats for that event are gone, too.

“We’re thinking about potentially doing a crowdfunding, as well, if people really want to see more episodes,” Renzi said. “But ultimately the idea is just two events, to get some PR for Carmelo, and then shop it around. See if anybody takes it.”

“Carmelo’s: The Show” is expected to be available on YouTube or Vimeo after the next in-restaurant showing. Learn more about the cast and crew at www.carmelostheshow.com.

Carmelo’s, the restaurant, is open for business now at 425 Center St., Lewiston. Visit online at http://www.carmelos-restaurant.com/. 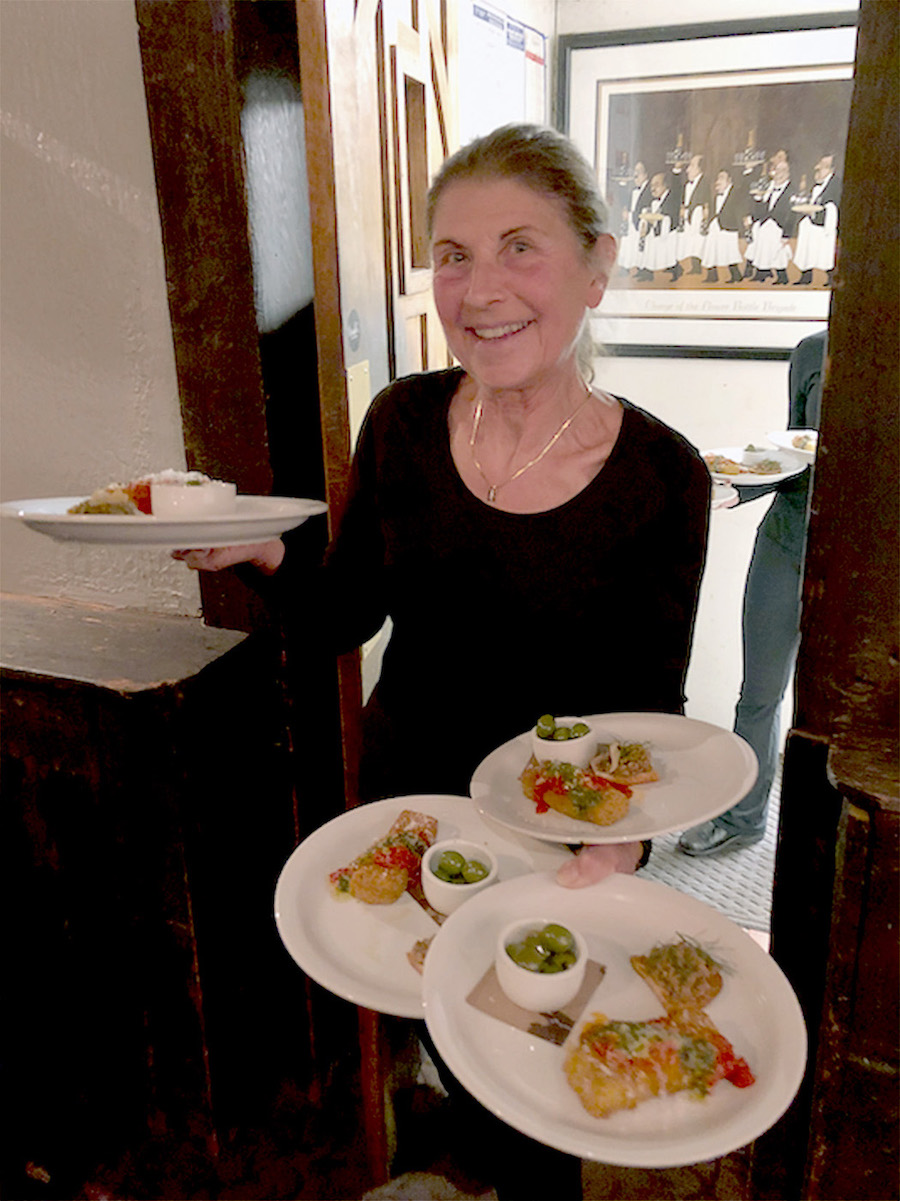 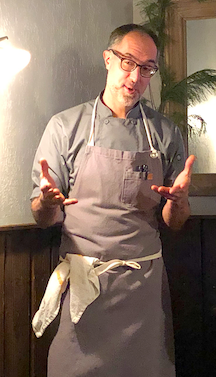