by jmaloni
Sat, Nov 24th 2018 07:00 am
Inclusion is the goal
By Joshua Maloni
Managing Editor
Excitement is growing for an all-inclusive play area unlike anything else in Lewiston.
Village officials met recently to review a near-final set of designs for Mason's Mission Playground at Marilyn Toohey Park. When completed - hopefully by next summer - the playground is expected to be almost 14,000 square feet. It will complement the existing rides while offering enhanced safety and shading features; sound, motion/movement and sensory-sensitive areas for children with special needs; musical instruments; new "buddy" swings, We-saw seesaws and wheelchair-accessible slides; a seated zipline; open green space to interact or just stretch; and a splash pad in the center.
The design is broken down into different age-appropriate zones, each clustered together so parents can be centrally located.
"If you have kids, multiple age levels, multiple abilities, they're all closer to play; to supervise," said Parkitects landscape architect Lynn Mason.
In addition, a shelter will be built, and walkways created to frame the park.
Though other play areas exist in the village, Mayor Anne Welch said, "It's about being all-inclusive. That's the main goal. ... When you see a kid that can't use it, it's really heartbreaking. They just want to play like everybody else. This will help them do that."
She explained, "This whole thing started when I was first starting to run for mayor. I got a text from Christine Sirianni," who is the president of The Family & Friends Down Syndrome Association of Niagara. "She said it would be great to have a special needs playground. She said at Academy Park or Kiwanis Park (which is a Town of Lewiston site). ... I said, 'I think it's an excellent idea, but I'd like to see it at Red Brick.' "
Welch added, "I said, 'If I get elected, I'm going to really shoot for it.' "
At a board meeting in September, the mayor said an inclusive play area would be a "great asset" to the village.
Since then, Welch has brainstormed design ideas with village trustees; Parks/Recreation Conservation Board members Brendan McDermott and Michael Hibbard (chairman); the playground design firm Parkitects; and Jason Evchich, the man who came up with the vision for the original Mason's Mission playground in Pendleton.
"We're really coming up with some great ideas for this park," said McDermott, who is the village recreation director.
"To have this in our backyard is going to be really special," he added, and stated countless parents have come to him in the past five years hoping to have such a play area in the municipality.
McDermott also noted a splash pad will be a welcome addition. This past summer was the first for outdoor recreation activities, and children were looking for relief from the heat.
Evchich is the master builder, so to speak. He has been featured in print and broadcast news reports for his playground plans, which, Evchich said, are the result of learning experiences.
He and his wife, Jennifer, have three children: McKenna, 7; Mason, 5; and Matthew, 4. The boys were diagnosed with hypomyelinating leukodystrophy, which delays walking and talking. Mason's Mission was inspired by Evchich's desire to see his "limited-edition" sons have the same play opportunities as McKenna.
"A lot of people who don't have a child who is 'limited-edition,' as we call them, they come and they sort of realize that there's a whole 'nother world out there," Evchich said. "What we're trying to do is harness that realization; (provide) a little help; and basically what we're trying to do is use these playgrounds as a tool to teach them how to start to live an inclusive lifestyle."
Evchich worked with Parkitects to come up with an all-inclusive design in Pendleton. He and his Mason's Mission team were able to raise more than $450,000 to pay for the 12,000-square-foot playground, which opened behind the Town Hall in 2017. 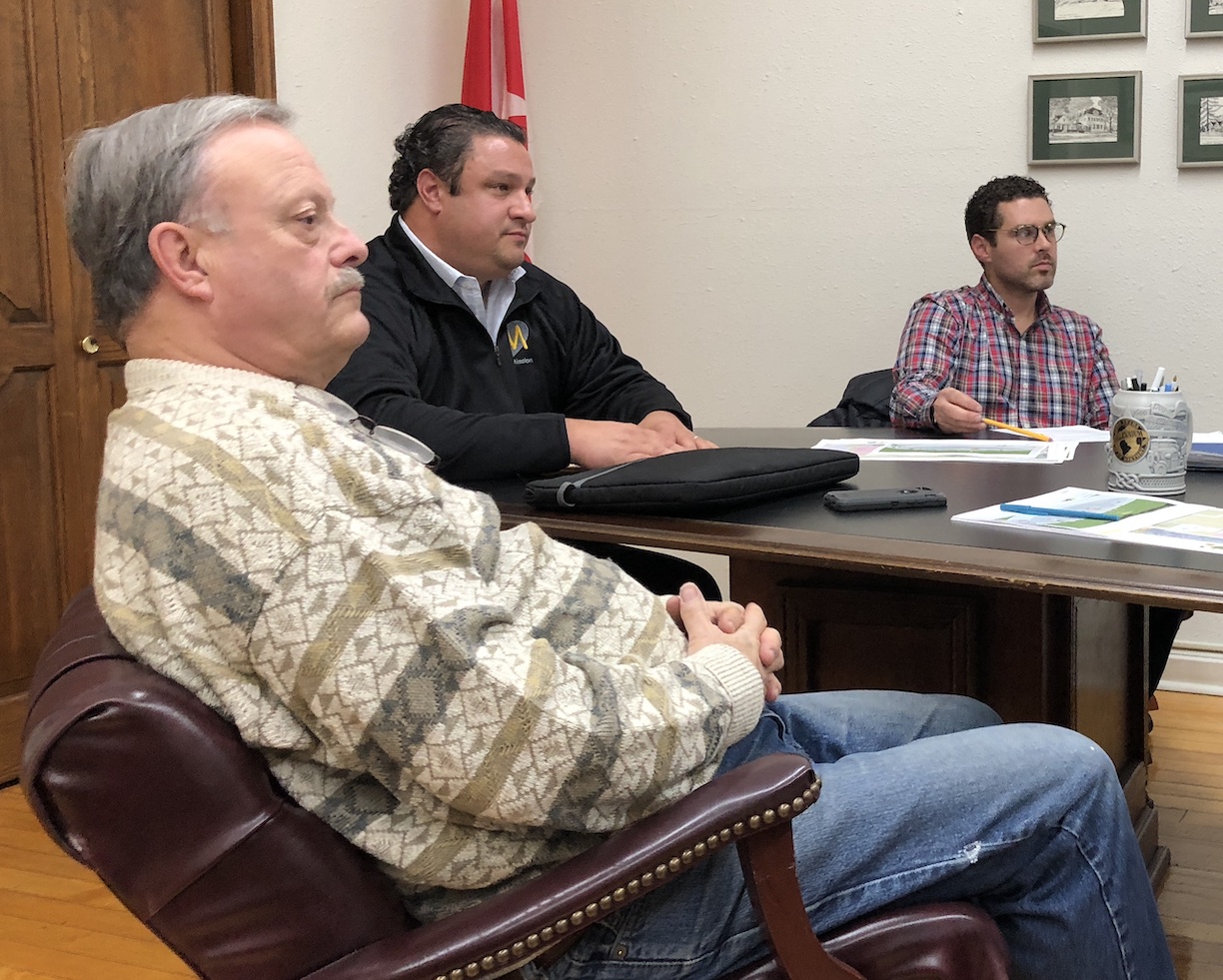 From left, Village of Lewiston Trustee Vic Eydt, Mason's Mission founder Jason Evchich and Parks/Recreation Conservation Board Chairman Michael Hibbard at a recent playground meeting.
At the Lewiston Mason's Mission site, "The kids won't be able to do everything. They won't. But I can guarantee you that they're going to be able to do more here than anywhere else in Western New York. And that's the important part," Evchich said.
McDermott noted, "It's going to be the intermingling of the kids. The kids who don't have a disability aren't going to know the difference. They're going to love that playground just as much as the kids with disabilities. Then the kids with the disabilities, it's not like this segregated area that they're going to be playing in. All the kids are going to be playing together, which is going to be great. I really envision some great interaction with the kids."
Evchich said, "It's not just the play; it's the interaction. It's the family interaction between mom and dad and other mom and dads" so that special needs children "are in the middle of something, not on the sidelines."
Though he achieved his initial goal of providing a play area for his own children, Evchich said he continues to work with other communities to provide Mason's Mission-style recreation installments, because it's the right thing to do.
"Who am I to say 'No'? Who am I to be just kind of selfish and say, 'Well, I did what I wanted to do for my kids, and I'm going to leave everyone else out.' The motivation is here," Evchich said. "This has meaning. It's the fact that they want to do this. That's our motivation. Our motivation is the families - the hundreds of letters that we get via website or via email about 'My child talked to another child today, for the first time in four years, at your park.' "
Welch said, "Jason's been outstanding. He's really good. He knows everything about it. He knows what we need. He has the passion for it. He's great."
The playground itself isn't expected to take a long time to build, but Village of Lewiston residents will notice months of work leading up to that point - including grading, resurfacing and foundational construction, plus installing utility connections.
It was revealed the playground at Marilyn Toohey Park would be named Mason's Mission, as Evchich and his foundation are overseeing many of the behind-the-scenes aspects of this project, including fundraising.
The outdoor play area is projected to cost more than $650,000. Welch said she and Evchich will seek grants, state funding and private donations.
"We are not going to tax the residents to do that park," she said. "It's going to be other funding coming in."
Welch has a list of a dozen-plus private and corporate entities that she said she believes will be interested in funding the project. McDermott and Evchich said donors could receive naming rights to particular pieces of playground equipment. (See related on Page 4.)
"I really don't think we're going to have a problem getting to that (total cost) figure," Welch said.
Donors will be cited on signs at the entrances to the play area.
Those interested in contributing can contact Welch at the Red Brick Municipal Building.