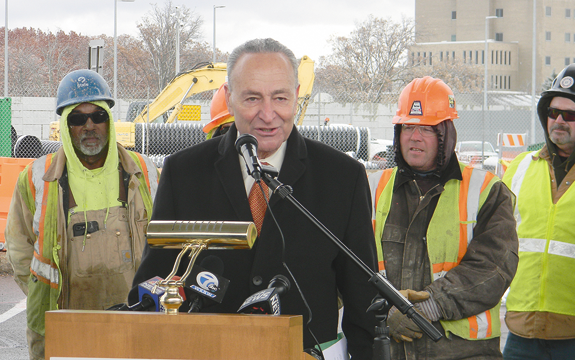 Wed, Nov 21st 2018 11:25 pm
New facility to feature dedicated bus lane, passenger-processing area
By Terry Duffy
Editor-in-Chief
U.S. Sen. Charles Schumer paid a special visit Tuesday to the Lewiston-Queenston Bridge to announce the start-up of a phase two, $91 million modernization of the U.S. Customs Plaza at the bridge complex in Lewiston.
Schumer attended a press briefing with Kenneth Beiger, general manager of the Niagara Falls Bridge Commission, and NFBC officials. The focus was an ongoing government improvement project at Lewiston-Queenston - one that is intended to address long-standing traffic problems at the U.S.-Canada border entry.
"For several years, the Bridge Commission has been working diligently with our partners at the U.S. General Services Administration and U.S. Customs and Border Protection to advance an extremely important facility modernization project, here at the Lewiston port of entry," Beiger said. "For all of our negotiations with the GSA and CBP, there's been (a need) to enhance this project. The senator has long understood the critical role that this international bridge crossing plays in effecting trade, travel tourism and the economy of Western New York, New York state and Southern Ontario. ... We are extremely pleased to have Sen. Schumer here today."
Constructed in 1962, Lewiston-Queenston ranks as the fourth-busiest U.S.-Canada border crossing and has been sorely in need of updating.
"When the Niagara Falls Bridge Commission came to me in 2015 and told me about all the delays and everything else, here at the Lewiston-Queenston Bridge, we knew the plaza needed improvement," Schumer said. "This is a vital thoroughfare; this is the fourth-busiest connection point between Canada and the United States. There's a whole lot of commerce and energy and jobs that come right across this bridge. So, even if it flows very smoothly, it is very, very important. People have to wait long hours.
"I went to work; I got the GSA, General Services Administration, and CBP, Customs and Border Patrol, to put $100 million to approve the modernization of this great bridge."
Lewiston-Queenston is coming off a $21 million phase one rehabilitation project in 2016 that increased its overall capacity. Tuesday's announcement addressed the $91 million phase two component, which will see significant expansion on the U.S. Customs Plaza at the bridge. It's intended to greater facilitate efficient border crossings.
The $91 million expansion includes:
•New secondary processing and primary lane support facilities;
•A new secondary processing canopy;
•Replacement of the 10 existing primary lanes by automobiles and trucks;
•Five additional new lanes that can be used to process automobile/truck traffic based on demand; and
•A new dedicated bus lane and a dedicated bus passenger processing area contained within the new facility.
Schumer said, once complete, the project would greatly improve the traffic flow and provide added benefit to the Western New York and New York state economy from the impact of Canadian visitors.
"Canadian shoppers, alone, spend $1.7 billion in New York. That creates jobs, makes our stores, restaurants more profitable," Schumer said. We want everyone who crosses this bridge to do it safely and quickly.
"And that's what phase two is all about. We're going to have a dedicated bus lane, so to make screening large groups much easier. There will be another five lanes for passenger and commercial traffic and truck screening, and lots of other things that will help commerce flow smoothly across the bridge.
"Finally, it's going to allow state-of-the-art technology used by the men and women who protect our borders. This is great; it's going to employ an additional 200 people; since these are government construction jobs - these are good-paying, middle-class jobs. Over 1,000 people will work on the whole big project altogether. That's what I want: Creating jobs is one of the things I've tried to do.
"So, what will it mean for the average Western New Yorker, or the average Canadian? (Improved) speed, less wait time, less worry. And that will be great for people's convenience, but, more importantly, for keeping our economy humming."
"We are excited to move forward with the expansion project," said Rose Brophy, director of the U.S. CBP Buffalo field office. "The current administration building is over 50 years old. The new facility will provide our officers with the modern amenities necessary to complete their important security mission, while also expanding processing capabilities, which will greatly improve efficiency at the border crossing. We look forward to working with our stakeholders as this project gets underway."
Niagara Falls Bridge Commission officials said the phase two project would be completed in a staged approach, which is intended to ensure the current number of primary inspection lanes will remain open throughout the duration of construction. That will help mitigate any traffic delays.
NFBC said latest expansion at the bridge follows on a May lease agreement with GSA that will provide operational facilities and border inspection services space for CBP staff at the bridge. GSA signed a 20-year lease with the Bridge Commission for more than 92,000 feet of space at the bridge at a rate of approximately $3.45 million annually. 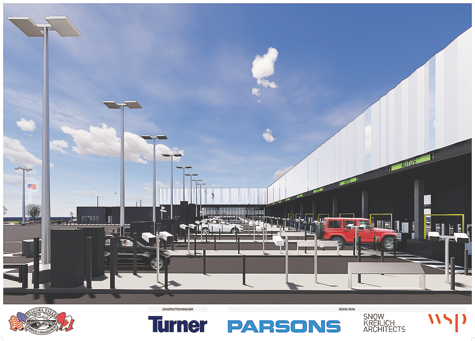 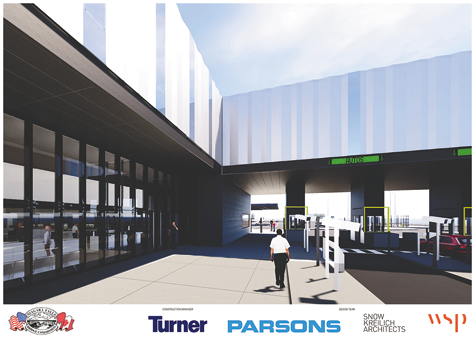 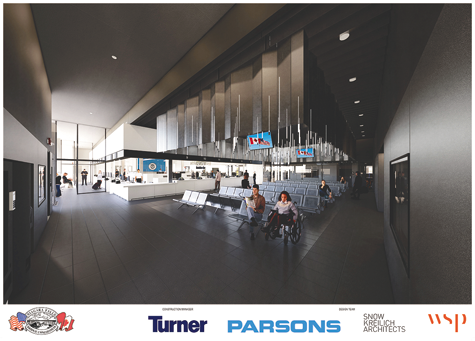