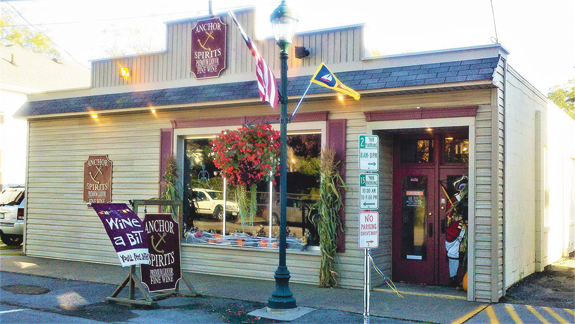 Anchor Spirits on Lockport Street is shown with the 15-minute parking signs in question. (Submitted photo)

Parking problems in Youngstown: Businesses at odds over 15-minute marker

Sat, Oct 6th 2018 06:55 am
By Terry Duffy
Editor-in-Chief
Opposition continues to build in Youngstown on village plans to modify a long-standing street parking arrangement for a Lockport Street liquor store.
A measure to remove a 15-minute parking provision was announced at a Sept. 13 Youngstown Village Trustees meeting after it received input from local business owners and the Youngstown Police Department. Board members are now seeking to change the village code and modify a 15-minute parking provision in front of Anchor Spirits, located at 113 Lockport St.
That measure reads as follows:
"Village Code 232-12(E) states on the south side of Lockport Street commencing 90 feet easterly from the curb line of Main St and then extending for a distance of 50 feet, parking shall be limited to 15 minutes during the hours of 10:00 a.m. to 9:00 p.m. effective 9-25-2003."
In comments received earlier from business owner Sue Mac Naughton of Everything Youngstown, and Cathy Pasquantino of The Village Diner, both questioned what they viewed as a preferred parking arrangement afforded to one business, and why a better solution could not be provided to all.
"I believe the village code ... should be removed from the books until the Village Board is able to sit down with all of the Main/Lockport Street businesses owners along with Parking Planning Professionals to address 'On-Street' parking within the defined business district," Mac Naughton wrote.
"(The) perfect solution is municipal parking which I know the Village Board is working on," Pasquantino wrote.
Anchor Spirits co-owner Cheryl Butera, who also serves as president of the Youngstown Business and Professional Association, recalled the background on the provision. She said the Youngstown U.S. Post Office was located earlier at the Lockport Street address now occupied by Anchor Spirits, and it included the 15-minute parking provision - a measure that remained for succeeding business owners to present day.

"From 1973 until right now, this has been 15-minute parking," she said.
Butera said, back then, earlier owners of the liquor store business, in order to satisfy State Liquor Authority requirements, had agreed to provide designated parking. That remained in place until 2007 when the Buteras took over as owners.
Again, the village sought to change the measure, a change the Buteras opposed back then and continue to do so now.
"One day we came and our signs are gone," Butera said of the 2007 village move. She said she and her husband, Mark Butera, acquired the store with the understanding the 15-minute provision came with the property and that it was intended for all businesses in the area. "It's not like Anchor Spirits owns those spots, but (for use as) 15-minute parking, which is the kind of business that we are."
The owners argued their case before the village in 2007 and, with the backing of the former village mayor, the late Neil C. Riordan, they were grandfathered in for the 15-minute provision. It has continued to today.
"Neil Riordan was instrumental in getting that code for (the) 15 minutes," Butera said.
Mark Butera said the couple was shocked when they heard news of the announced Sept. 27 hearing to consider the parking change. "It was the first we heard of it."
According to minutes from the Sept. 13 village session, "The Board discussed the reasons the time limit was implemented and what effects it would have to remove it. Chief Schuey added that from the Police Departments perspective, it would be beneficial to remove the parking time limit signs as a 15 minute time frame is hard to enforce for their Officers. The Board agreed that the time limited parking in that area was no longer necessary. Attorney Caserta confirmed as this is a code change, a public hearing must be held. ..."
The Sept. 27 public hearing saw significant opposition to the measure, from the Buteras, from Mike Stella and Greg Muller of the Mug and Musket, as well as from Porter Councilman Tim Adamson, a former village trustee, and others.
"Those two spaces, they are public parking spaces ... 15 minutes, they are for everybody - all four neighboring businesses. They all use them. They are there to benefit the public," Mark Butera said.
"There are no parking problems to begin with," he added.
Moreover, in village conversations that night, Youngstown Police Chief Mike Schuey said he had received no complaints of any parking problems on the 15-minute spots.
"There's no parking problems to begin with," Mark Butera said.
That night, he presented the board a petition bearing three-and-a-half pages of signatures of those opposed to the measure. The petition drive continues at Anchor Spirits. Village trustees are expected to review the measure at a session at 7 p.m. Thursday, Oct. 11.
Categories
Home feature NFP Sentinel Sentinel feature Sentinel HP Feature Picture