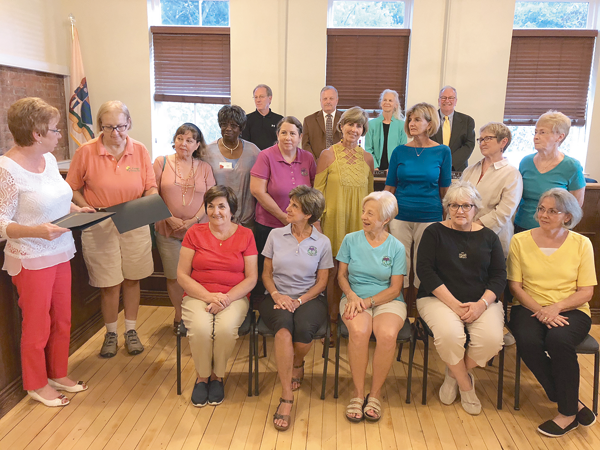 Some of the 52 Lewiston Garden Club members attended Monday's Village of Lewiston Board meeting to receive a proclamation from Mayor Anne Welch and the Village Board. Below: Beautification Commission members Pam Hauth and Marianne Gittermann, with Welch, also received an award, as did Judy Talarico.

Sat, Sep 22nd 2018 07:00 am
By Joshua Maloni
Managing Editor
Mayor Anne Welch and the Village of Lewiston Board of Trustees issued proclamations to several community leaders on Monday. The awardees were lauded for recent beautification efforts on Center Street. Those honored included members of the Garden Club of Lewiston, the Lewiston Beautification Commission, Samuel and Judy Talarico, Gary Hofing of Lewiston Plaza (Rite Aid), Anthony DiMino of Lewiston Tops/CVS Plaza, and Fran and Marie Williams.
"These people put a lot of gardens in, a lot of time, a lot of money, effort, so we'd like to honor them tonight with a certificate of appreciation," Welch said.
In particular, the two Center Street plazas were spruced up with the addition of new plantings.
"They did some beautiful garden work," Welch said. "We appreciate everything you did for the village."
Garden Club President and Beautification Commission Co-Chairwoman Marianne Gittermann thanked the Village of Lewiston Department of Public Works for its assistance with the plantings.
Fran and Marie Williams sponsored the new statue inside Hennepin Park. The sculpture is of a little girl watering flowers.
"The Williams have donated money to the Garden Club, because they saw how hard we work and they appreciate what we've done in the village," Gittermann said.
Sam and Judy Talarico contributed to gardening efforts around the Lewiston Plaza.
Judy, who is also a member of the Garden Club, said Hofing donated parking lot funds raised at the Northwest Jazz Festival back to the Lewiston service group.
Welch said DiMino purchased 250 bulbs for the area in front of the CVS Plaza.
"That should really look nice," she said.
Hofing and DiMino could not attend the meeting. 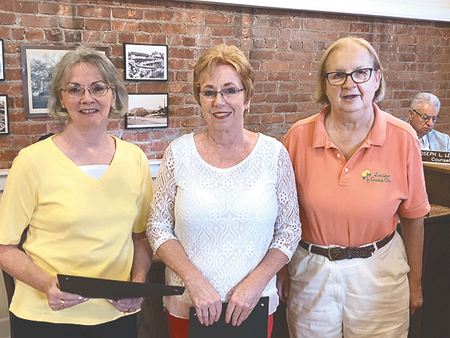 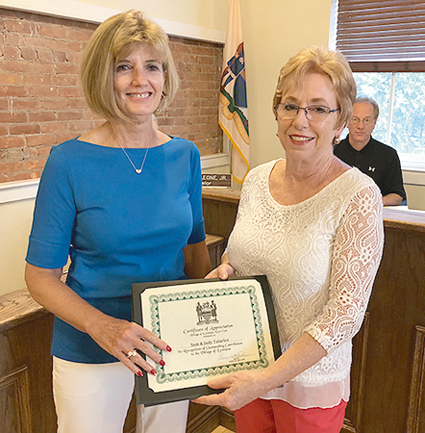 Safety First
Trustees have voted in consecutive meetings to bolster pedestrian safety.
At the August meeting, the board opted to amend Section §11-19 of the village code and add stop signs at the intersections of Mohawk and North Fourth streets (east and west) and Mohawk and North Seventh streets (also east and west).
This week, trustees agreed to reduce the speed limit on Onondaga Street (between North Second and North Fourth streets, adjacent to Toohey Park) from 30 miles per hour to 20 mph. This change is due to playground and recreation center proximity to the roadway. 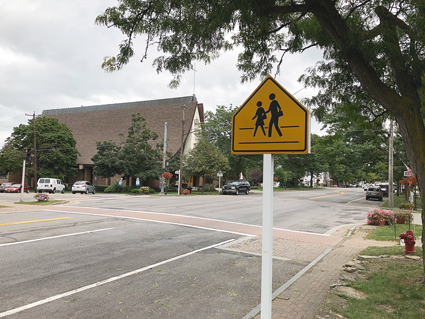 In an effort to increase pedestrian traffic, the brick pavers have been outlined with a reflective white paint (also shown below, left). Existing signs, like the one above, are expected to be replaced with signs similar to what's shown below, right.

In a related matter, the New York State Department of Transportation recently installed new pedestrian crosswalk signs and added reflective white paint at intersections.
The DOT plans to remove the decorative brick pathways, which do not conform to Americans with Disabilities Act guidelines. There is no timetable for that work.
Building Permit Fees
Building Inspector Ken Candella reminded residents (and developers) the village recently amended the inspection fee schedule. Permit amounts can be found on the municipality's website, https://villageoflewiston.net/.
The new fees are designed to offset some of the cost the village takes on in studying project submissions and approving construction.
Categories
NFP Sentinel Sentinel feature Sentinel HP Feature List
comments powered by Disqus