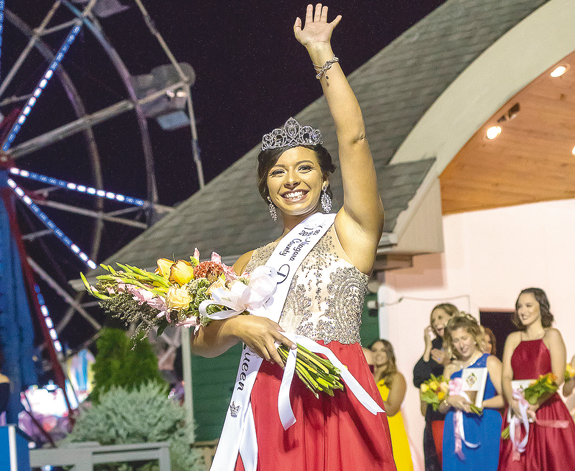 by yarger
Thu, Sep 13th 2018 07:25 pm
New Peach Queen is Niagara-Wheatfield High School grad
By David Yarger
Tribune Editor
If you didn't know, a local favorite festival strolled through Lewiston this past weekend - the Niagara County Peach Festival. With the commencement of the festivities, that also brings on a new Niagara County Peach Queen.
At this year's Peach Festival, Santana Sawma was crowned the new Peach Queen. She steps in place of 2017-18 Niagara County Peach Queen Jamie Hagerty, who raised $4,000 for Hillside Family of Agencies through multiple fundraisers, as well as volunteering for numerous causes in Niagara County.
In her second Peach Queen pageant, Sawma, 21, said she was amazed to hear her name called as Niagara County Peach Queen.
"Of course, I was in a similar situation last year, but to actually be crowned was stunning. I'm not even sure if it has completely sunk in yet. That being said, I am ready to embrace my title and make the Kiwanis and my community proud by giving back as much as I possibly can," she said.
Sawma, like Hagerty, is a Niagara-Wheatfield High School graduate. She said Hagerty and past Peach Queens have been nothing but helpful in the transition.
"Jamie, as well as the three preceding Peach Queens before her, have all been really great and supportive. We all attended Niagara-Wheatfield High School together and it truly bonds us. They were all amazing Peach Queens and I intend on picking their brains. I know there is no shame in asking for help, especially when it comes to the best possible way to help the community," Sawma said.
Going into her second pageant after finishing in second last year, Sawma knew a bit about what the contest was all about. That doesn't mean there wasn't a little stress for year two. Sawma was quick to praise Jennifer Pauly, chairwoman of the Peach Queen program, for helping calm her nerves.
"Jen Pauly is always instilling confidence in all of the contestants and teaching us skills that will last a lifetime," Sawma said. "She is a great mentor. Last year, I placed as a runner-up and the confidence that Jen and the Peach Queen program instilled in me ultimately gave me the drive to return this year even better.
"Now being crowned, I feel I have better confidence and poise and am ready to commit my time to the community and inspire others to do the same. I couldn't imagine a more humbling thing to do with my time." 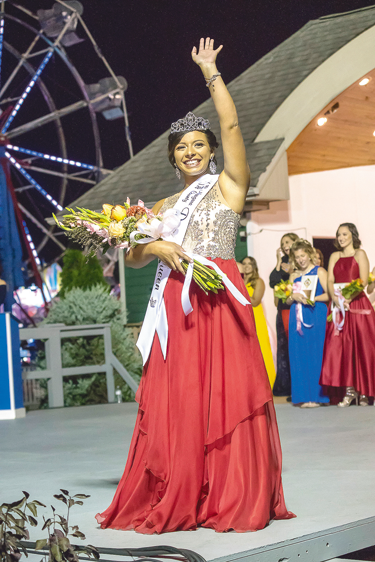 Sawma announced she would raise money for Dog Tags of New York, a nonprofit organization with a mission to partner a rescue dog with a veteran or civilian. Pairing a rescue dog with a veteran builds "purpose, trust and camaraderie while aiding in transition and adjustment," according to the Dog Tags of NY Facebook page. Sawma said she really enjoys what Dog Tags' mission is, and she wants to get out into the local region as much as possible.
"Their story is absolutely touching," Sawma said. "On top of that, I plan to attend as many local events as possible. The greater the outreach I can have, hopefully the more lives I can touch and further inspire to get involved in community service."
Sawma noted she wants to double the $4,000 scholarship she was awarded by the Lewiston Kiwanis Club in money raised for Dog Tags of New York.
In the end, Sawma hopes in her time as Peach Queen she could touch as many lives as possible and possibly instill the sense of giving back into as many people as possible.
"Ultimately, I want to impact as many people as possible in a positive way. Now that I am Peach Queen, I feel I have been given all the more opportunity to do so. Whether that be through inspiring others to get involved in community service, helping promote the Peach Queen Program and the Kiwanis, or advocating for Dog Tags New York. ... It's all about paying it forward," she said.