by jmaloni
Sat, Sep 1st 2018 07:05 am
Annual Lewiston favorite opens Thursday at Academy Park
By Terry Duffy, Editor-in-Chief
Zackary Kephart, Contributor
Don't look now, but it's just around the corner.
Yes, one of Lewiston's favorites - the 61st annual Niagara County Peach Festival - opens for a four-day run Thursday evening, Sept. 6, and continues to Sunday evening, Sept. 9, at Academy Park in the Village of Lewiston.
Presented by the Kiwanis Club of Lewiston, visitors from the River Region and beyond can look forward to an expanded festival and even more fun this year with great rides and attractions on the Amusements of America midway, the throngs of vendors and concessions, great foods, the entertainment and, of course, those delicious Niagara County peaches.
More than 35,000 people are expected to attend this year.
Thursday
Come 5 p.m. Thursday, it will be peaches and a whole lot more, as Kiwanis officially get things underway.
While Thursday last year acted as the ride preview night, this year the festival will be fully open, with craft vendors, food, and fully operational rides.
Peach Festival organizers said visitors can look forward to some special treats that night.
"We have a few new things this year that we will be rolling out," Chairwoman Jillian Colucci said. "This is the first year that we, as a festival, will be opening on Thursday night. As a wonderful kickoff, at 6 p.m. we'll have Buffalo Sports Mascots and Superheroes at the park."
At 6 p.m., the Buffalo Sports Mascots and Superheroes will have a meet and greet. The special visitors will stroll the Peach Festival grounds from 5-7 p.m.
"They will be on the field; young people will be able to meet them, take their picture, get an autograph," Peach Festival Advisory Chairman Jerry Wolfgang said.
At 7 p.m., 90 West will perform on stage. The band has been performing for 17 years and is the longest performing country music band in Western New York. It plays music by a variety of country music artists, including Luke Bryan, Miranda Lambert, Waylon Jennings and Johnny Cash.
Colucci noted, "It is a school night for many of our WNY students, and it'll be a nice night to come out after school, have a bit to eat, have your peach shortcake, and you'll get to mingle with our WNY sports mascots and you'll see some of your super heroes, as well.
She invited visitors to check out the Peach Festival grill tent, sponsored by Latina Foods this year.
"We have an organization, the Lew-Port High School Friends of Football, that will be running our grill tent this year. And half of the proceeds ... will go back to Lew-Port High School Friends of Football," she said. 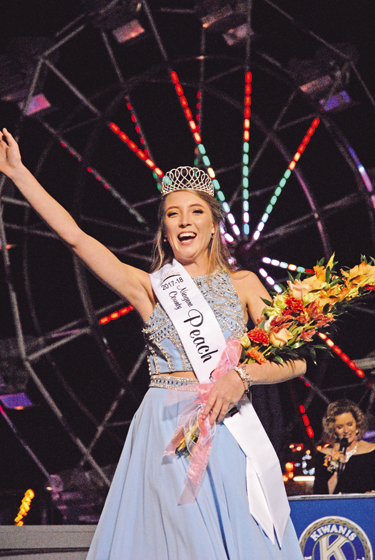 2017-18 Peach Queen Jamie Hagerty
Events
Over the course of the next three days, the Academy Park grounds will be the place to be with competitions, performances and numerous attractions.
"There's a number of different competitions going on throughout the Peach Festival," Wolfgang said. "It is an event within an event. We have entertainment all four days; so each night there is a different entertainment group performing."
At 5:30 p.m. Friday, the opening ceremony will begin. It will be followed by the all-stars cheerleading competition shortly afterward. A number of high school and youth squads from throughout the area are expected to visit.
At 9 p.m., the renowned Summer of '69 All-Star Band will perform on stage.
Returning this year to the festival is Terry Buchwald as Elvis at 8 p.m. Saturday. Since 1991, Buchwald has sold over 50,000 records and has opened for national acts such as Lee Greenwood, Diamond Rio, Montgomery Gentry and the Charlie Daniels Band. He was inducted into the Buffalo Music Hall of Fame last year.
On Saturday morning, the 40th annual Kiwanis 5K Run takes over the streets of Lewiston.
The race route will start and finish in front of Lewiston's historic Frontier House on Center Street and is run through Village of Lewiston streets on a certified course. Registration opens at 7:30 a.m. Saturday at KeyBank at Fifth and Center streets in the village. The race - featuring new WGRZ-TV Channel 2 meteorologist Heather Waldman as the honorary starter - is scheduled to get underway at 9 a.m. Pre-register online at www.racemanagementsolutions.com.
Proceeds benefit the Eliminate Project of Kiwanis International, which works toward eliminating neonatal tetanus.
Kiwanis 5K race chair Randy Gorzka said the first 200 participants will receive a T-shirt. A post-race celebration will follow.
Next up, the annual Lewiston Kiwanis Peach Festival Parade takes over Center Street at 11 a.m. Starting from Fourth and Center streets and continuing east to the Portage Road entrance of the park, this Niagara County favorite typically sees in excess of 100 units participating - from youth sports organizations to dance groups, police and fire companies to politicians, community, church and social organizations, to celebrations of Niagara County life. The parade typically runs close to two hours and is very popular, so get your spot on Center Street early.
On Saturday and Sunday, check out the midway attractions, the multitude of foods, games and fun; the on-stage attractions - Peach Blossom, Peach Fuzz and "Taste Off" competitions; the Peach Queen fashion show; Buchwald as Elvis; a dance showcase; a performance by Everyday People; and the always-memorable Peach Queen finals.
Parking & Prices
Worried about parking at this year's festival? No need, as Kiwanis has you covered.
"A number of years ago, people asked us if we could supply parking," Wolfgang said, recalling past discussions with festival parking chairs Jeff Sanderson and Gerry Gismondi. Today, he said, "We can supply not only the parking, we'll supply the ability for people to go to and from the parking, to the field. We're able to provide free transportation, free parking for anybody who wants to come to the Peach Festival."
"Parking is always an issue when it comes to festivals like this," Gismondi said. "We like to provide it for free. We've done it since its inception."
He explained that Kiwanis is once again partnering with Artpark & Company for parking in the venue's upper lots, as well as with Gray Line Tours to transport attendees to and from the Academy Park field - all at no charge for festival visitors.
Kiwanis Club President Marty Pauly suggested patrons use the shuttle.
He is distributing program books around town, which will contain directions on where to use the shuttle.
People can park their cars in the upper lot of Artpark. There, the shuttle will pick visitors up and then drop them off right at the corner of Portage Road and Cayuga Street (between Warren's Village Hardware and Syros Restaurant). When attendees are ready to go back home, they can take the shuttle back up to their cars.
"We understand parking can be tough, which is why we started the shuttle a few years ago to accommodate visitors," Pauly said.
Gismondi noted there is handicapped parking available at the front of Academy Park for visitors, as well. He suggested festival visitors check out the Peach Festival website (www.lewistonpeachfestival.org) for complete parking information, including maps and shuttle pick-up/drop-off sites.
Once inside the park, visitors will note a full midway of rides. With thousands of people on the grounds, advance ride tickets are recommended - and can save attendees time and money.
"They're the best way for families to come to the festival and save," Wolfgang said.
Peach Festival advance ride tickets - priced at $20 for 10 tickets, a 50 percent savings - are now on sale at nearly 30 locations throughout western Niagara County, including Lewiston and Niagara Falls, and on Grand Island in Erie County. Visit the Peach Festival website for ticket locations. 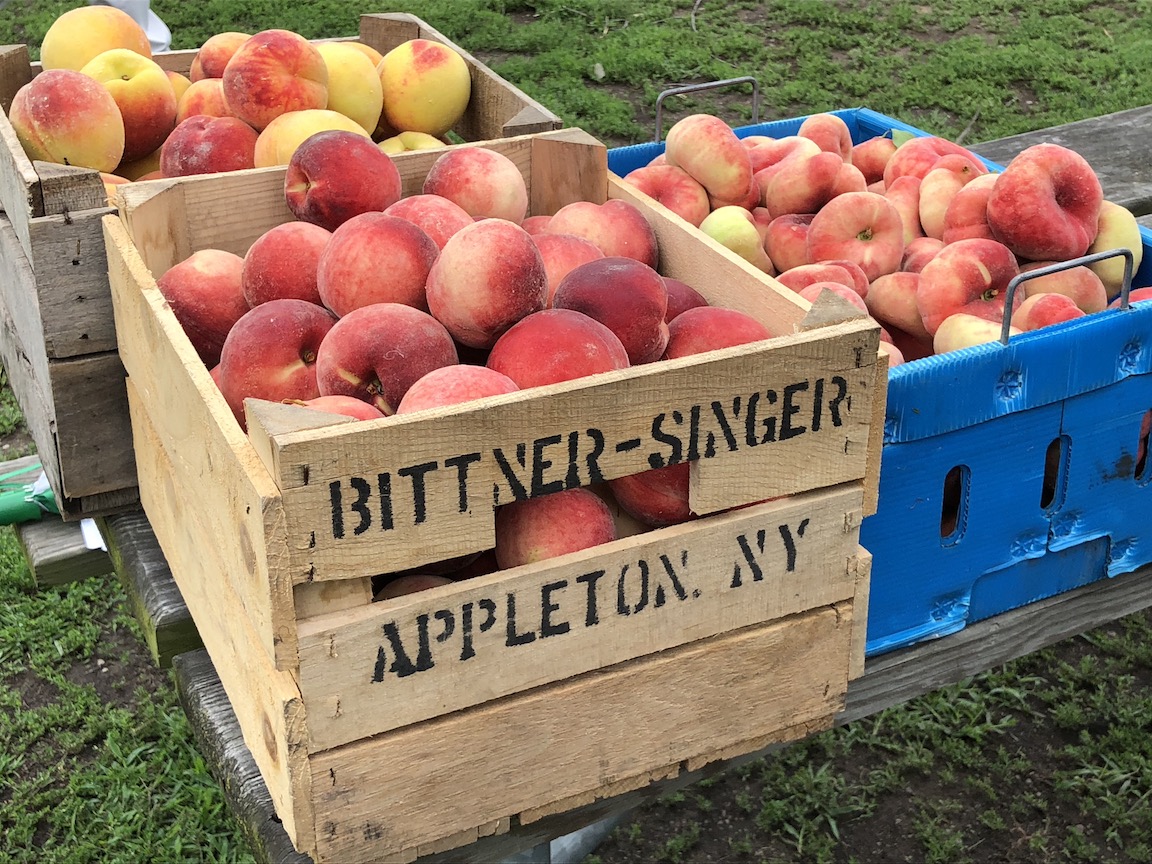 Peaches
And what of those peaches? Kiwanis is proud to announce its decade-long commitment of serving Niagara's finest grown produce continues, as Bittner-Singer Orchards in Appleton will once again provide fresh, locally grown peaches throughout the festival - served from the various Academy Park stands to the fabulous peach shortcake in the big tent.
"Ten years ago, Dean Beltrano, chairman of the Peach Festival that year, told us that we needed to have Niagara County peaches," Wolfgang said. "He explained that, prior to that time, Kiwanis had been working with peach growers from throughout New York state, neighboring areas and from as far distant as Washington state out west.
"Those peaches came to us because there was not a processing plant in Niagara County or Orleans County. The old Del Monte plant closed, (and) we could not process the peaches that were made for this peach shortcake."
Along came Jim Bittner of Bittner-Singer Orchards, who also serves as head of the Niagara County Farm Bureau. A relationship was born.
"If we didn't have him, we couldn't serve Niagara County peaches," Wolfgang said.
"We're real proud to be able to supply the peaches for the peach shortcake," Bittner said. "On our farm out in Appleton, we grow about 200 tons of peaches that are used for things from peach salsa to yogurt, ice cream to even filling in doughnuts.
"So we grow a lot of them. Ten years ago - the Peach Festival organizers came to us with a question, 'Can you supply the peaches?' I said, 'Yeah; that's not a problem.' "
Bittner said the Peach Festival will go through between 10,000 and 11,000 pounds of peaches.
"This is just for the peach shortcake," he said. "We grow them on our farm; we will be picking them ... getting them processed. We'll have them ready in the cooler and ready to go, so they'll have fresh peaches for the peach shortcake."
Giving Back
Pauly said, "What's great about the festival is that it's a family event. It's got a variety of events from our stage events to our cheerleading and dance competitions. We have a lot of rides and food vendors out on the field. There is definitely something for everyone. Additionally, we also have art vendors and our famous peach shortcakes.
"All of our proceeds are donated back out into the community. The festival attendees are coming to have fun, but they're also making a difference in the community. Without them, we can't make that difference.
"If people from the immediate area enjoy other activities we put on throughout the year such as the fireworks show or the Easter egg hunt, those are just a few examples of how we use those proceeds to give back to the community."
"We feed over 150 families during the holidays, and we pay for that using proceeds from the festival. Over 60 organizations reach out to us here at Kiwanis to donate in some way."
Yes, the 100-member-plus Lewiston Kiwanis Club welcomes residents from throughout Buffalo-Niagara to experience all that Niagara County Peach Festival has to offer. Members also remind you that, by attending this family event, the festival makes enough money to enable Kiwanis to better the Western New York not-for-profit community all year.
Wolfgang said, "In doing 61 years, we have been able to give to nonprofits over $1.2 million. ... Every year we dispense the funds that are taken after we paid our expenses (to numerous organizations)."
Wolfgang said the Kiwanis Club openly shares these funds with various community organizations.
"You can apply to the Lewiston Kiwanis and tell (us) how you benefit youth in Western New York. We are very happy to have you as a speaker (at our members' meetings) and write checks to your organization for all you do to help the youth of our community."
The 2018 Niagara County Peach Festival will be held the weekend of Sept. 6-9 at Academy Park on Center Street in Lewiston. More information can be found at www.lewistonpeachfestival.org. 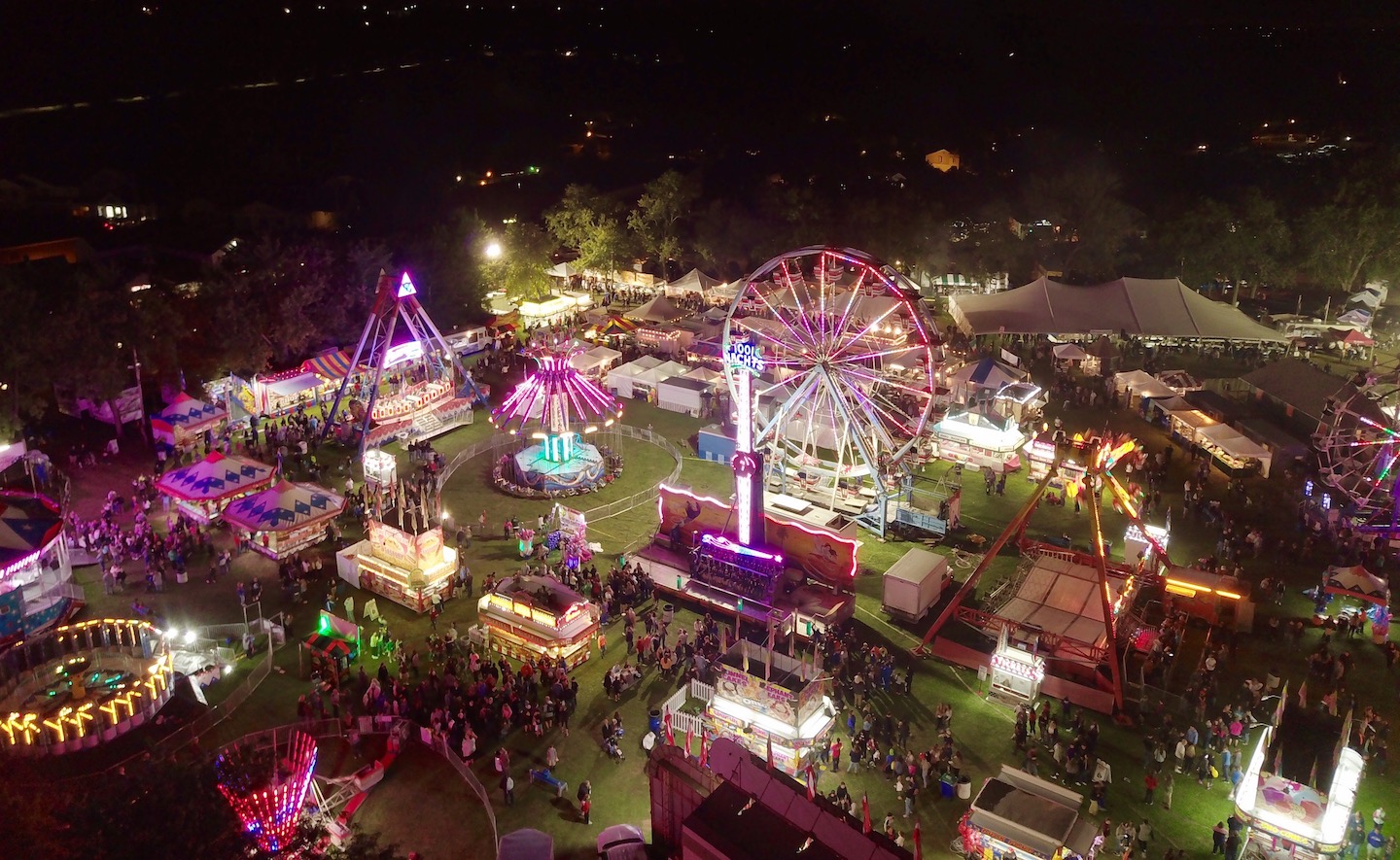 An aerial view of the Peach Festival grounds. (File photo)