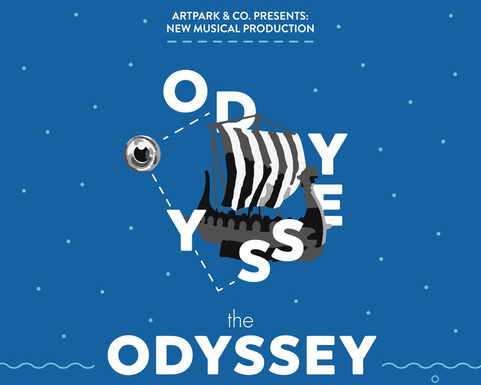 Artpark & Company expects 'The Odyssey' to be epic

by jmaloni
Sat, Jul 14th 2018 07:00 am
By Joshua Maloni
Managing Editor
When Artpark & Company presents "The Odyssey" on Aug. 4-5, the show will feature professional actors.
And college actors.
Student actors.
And community actors.
Locals who think they're actors.
And first responders, culinary staff and nonprofit workers who rarely get to act in real life.
In fact, there's a good chance Artpark patrons will recognize one, two or 20 of the more than 100 people who will participate in this "musical celebration" of Homer's tale.
Theatre Academy director Paschal Frisina was tasked with finding student-professional, semiprofessional and the acting equivalent of softball league talent to work alongside director Roger Danforth; Broadway's Terence Archie (Odysseus) and Emily Skinner (Penelope/Circe); Off-Broadway and Buffalo actor Christopher Guilmet (The Singer); and celebrated mime Gregg Goldston (Cyclops).
The result promises to be must-see - a tasty theatrical gumbo unlike anything previously presented on the Artpark Mainstage Theater stage.
Frisina said Artpark Executive Director Sonia Clark asked him to cast a wide net.
"How do we get the community involved in a show - and, mainly, how do we get people involved who have never done theater before," Frisina explained. "We wanted to get people involved in the community that like theater, come to theater, maybe come to Artpark or Shea's, and have always sort of been like ... 'Gee, I would love to do something, but I don't know how to get involved.' That was the impetus."
Frisina's search began at the beginning of 2018. Today, Artpark & Company's "Odyssey" cast includes individuals from People Inc., Empower, Buffalo Public Adult Education Division ESL program, Lewiston Fire Co. No. 1, the Iroquois Indian Band, The Slyboots School of Music, Art & Dance, the Mount Erie Baptist Church Choir, the Buffalo Gay Men's Chorus, Niagara County Community College and park volunteers. That's in addition to performers from the Artpark Theatre Academy, who have been rehearsing all this week.
When Frisina was out recruiting, "I would workshop them once a week, two hours at a time, and we would do theater games, some dance, (for ESL students) learning English, and toward the end of the process said, 'Hey, listen, we're doing this show. We'd like you to be involved in it. Would you like to be a part?' (They said) 'Yes; we'd love to!' So, we set up busses for them. We set up a rehearsal schedule so they could be a part of this show."
Artpark & Company calls it "theater of, for and by the people."
Frisina said that was the idea.
"We already have the academy here every day. Let's bring in some New York professionals; let's bring in some local professionals; let's reach out to these groups in the community who've never done theater before. Let's get them involved and, through that cross-section of the community, you end up with 100-plus," he said.
"The idea is that, if they don't do it what we would consider 'theater perfect,' that's not the goal. The goal is to give these people the chance to perform in their space," Frisina added.
The beauty of a plan like that is the non-professionals are insulated. In other words, they can play around within their space and, good or bad, not adversely affect the main actors. Thus, "The Odyssey" is both a professionally scripted presentation and a pseudo-improv piece meshing together into one big show.
Frisina said the Broadway actors were informed during auditions that this would be the case. He noted the actors cast are more than capable of performing while rolling with whatever else is happening around them on stage.
"The main story is led by our New York professionals, Terence and Emily, who are coming in," Frisina said. "The story sort of goes through Penelope and Odysseus. But then all the sub-characters, all of the ensemble, all of the 'celebrate Odysseus Day' - all of these things - will be done by the academy and the other adults ... who just want to be a part of being in a show at Artpark. That was the open nature of the idea." 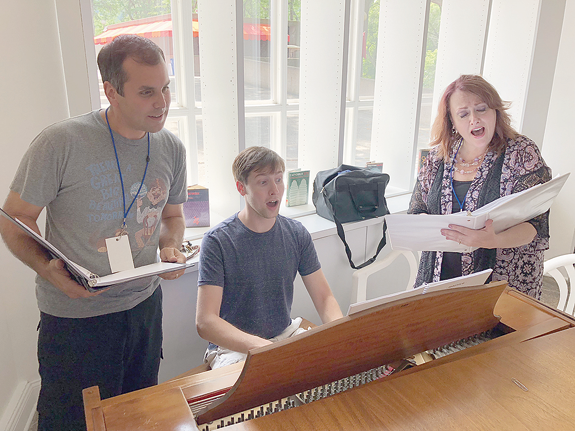 Music director Patrick Towey (center) works with singer Kathy Recchione as Paschal Frisina looks on.
Artpark's telling of "The Odyssey" is specifically crafted to be a community piece. This type of theater has been staged to rave reviews in New York City and in other large cities around the country.
Music director Patrick Towey said, "It's definitely an interesting experience to try and meet each group where they're at. Knowing how much you can push them, musically, but without overwhelming them. Because we want every group to have a positive experience. We're going to be working with professional Broadway actors, regional professionals, all the way through the community groups; groups of seniors and groups from agencies like People Inc. and Empower. And in each different rehearsal, like I said, you want to sort of meet them where they're at and present music in a way that is empowering to them, and enjoyable for them so that they have a really positive experience.
"That's what this whole process is about, is bringing all facets of our community together."
Clark noted, "For us, this era-spanning, epic poem written a couple of millennia ago, viewed through the contemporary lens, is a story illuminating the often-invisible members of our society who grow, heal and get celebrated in the process. It is also a journey of the new creative team coming together through collaborations that span our entire state."
She personally invited employees from some Lewiston businesses to participate, so there might be a few surprise pop-ups, as well.
"The Odyssey" is a story of high adventure and true love, and a theatrical celebration for the whole family. Performances are 8 p.m. Saturday, Aug. 4, and 1 p.m. Sunday, Aug. 5, in the Mainstage Theater. Tickets are $25 and on sale now at www.artpark.net, www.tickets.com, by phone at 1-888-223-6000 or in person at the Artpark box office, 450 S. Fourth St., Lewiston.
Should one still wish to participate, Artpark is accepting participation from non-professional adult participants. Those interested may call 716-754-9000, ext. 142, or email [email protected] For schedule and information. 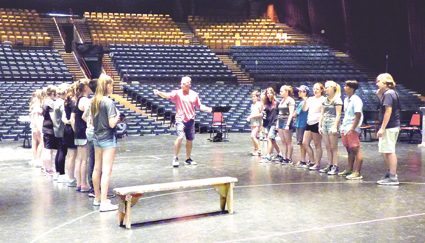 Jon Lehrer is teaching the Artpark Theatre Academy students dance routines for "The Odyssey."
Theater Academy students to perform 'Hansel & Gretel'
In addition to working on "The Odyssey," Artpark Theatre Academy students (ages 10-18) will present "Hansel & Gretel" in the outdoor wood theater (Emerald Grove area) at 2 p.m. Friday, July 20.
"We're inviting everyone from the community to come," academy director Paschal Frisina said. "It's just them (the students); they get their own show. They're playing all the parts."
This free show is written by Carin Jean White, who teamed with Artpark two summers ago on both the "Earthsong" installation and Bale de Rua's "Baila Brazil" parade.
"My hope and dream is that the kids really get the value that we're hoping to get out of this program," Frisina said. "They're getting so much in a one-month period."
For more information, visit www.artpark.net/events/artpark-theater-academy.