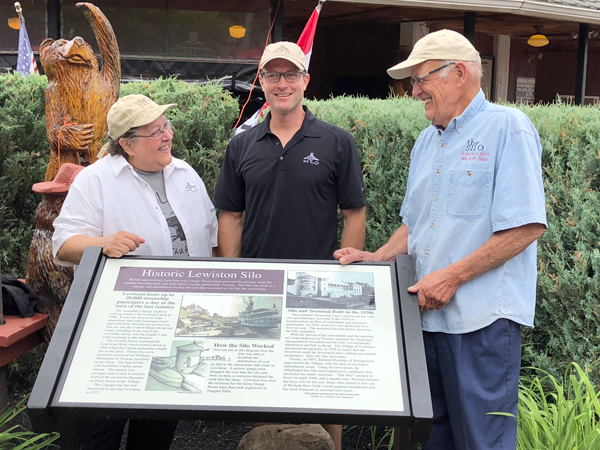 Roberta Cicero - who invented the "Haystack" - returned to The Silo to celebrate with Alan and Richard Hastings. As the story goes, Richard was in need of a blood sugar boost. Cicero took what she had on hand - crispy potato strings, ribeye steak, cheese, mayo - and crafted Lewiston's finest sandwich.

by jmaloni
Wed, Jun 20th 2018 07:15 pm
By Joshua Maloni
Managing Editor
Local elected leaders, businesspeople, current and former employees, friends and family members came out to The Silo Restaurant on Wednesday to celebrate the eatery's 20th anniversary on the Lewiston waterfront.
Niagara River Region Chamber of Commerce President Jennifer Pauly welcomed the crowd and introduced proprietor Alan Hastings.
He said, "It's incredible that 20 years has gone by already. Thank you all for coming out."
"Although it's 20 years as The Silo Restaurant, the history goes way beyond that," Hastings said. "We're very proud of the history, and it's been a really important part of our business. We've incorporated it into our developments and even into the original design of The Silo."
The building was originally a coal silo. Richard and Judith Hastings - Alan's parents - purchased the structure and converted it into a restaurant. Alan later acquired a repurposed CN Rail car, which he turned into "The Ice Cream Caboose" in 2010.
"We've always had the history of The Silo in consideration," Hastings said.
Village historian Lee Simonson designed a plaque that was unveiled on Wednesday. It details the property's historical significance.
Simonson noted, "This was a giant terminal (in 1900), which processed 20,000 people a day. There were four steamships out of Toronto carrying 2,500 passengers each. They made daily trips back and forth to Lewiston, and this was the way for people in Canada ... to come to the United States. ... Whether it was Buffalo, Syracuse, New York City or even Chicago, this is where they started; right here."
Alan thanked his parents and said, "This has been an amazing partnership between us. I'm really honored to have had that opportunity to work with my family at The Silo for the last 20 years."
He also thanked his customers and staff members, especially General Manager Lexi Alfiere.
Proclamations were presented to the Hastings family on behalf of New York State Sen. Rob Ortt, Assemblyman Angelo Morinello, Niagara County Legislator Rebecca Wydysh and the Village of Lewiston.
"It is with appreciation for the Hastings' 20 years of commitment at The Silo business that the Village of Lewiston Board of Trustees congratulates The Silo Restaurant for achieving 20 years of success in the Lewiston community," Deputy Mayor Bruce Sutherland said. "We appreciate everything you have done here. The improvements. It's a destination. We love it, and you have done a wonderful job." 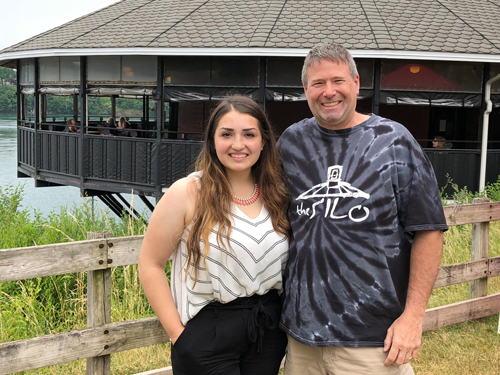 Lexi Alfiere poses with Silo "Superfan" Edward Plesnicar, who came into town all the way from Ashtabula, Ohio.
What Makes The Silo Special
Twenty years in the restaurant business is an eternity.
To be successful in that timeframe - especially in a village with a glut of popular eateries - requires two basic, yet fundamentally significant requirements: good food and even better service.
Of course, it also doesn't hurt to have a waterfront view, a "Haystack" sandwich, and national television exposure.
For two decades, The Silo Restaurant in Lewiston has been a culinary staple for residents and visitors alike. What began as a fascinating reuse of a coal silo has turned into a sprawling restaurant business - complete with that turn-of-the-century railroad caboose-turned ice cream trolley.
The Silo, which received TV chef Adam Richman's endorsement when he hosted "Man V. Food," continues to pair high-quality ingredients with fun food creations. That might mean sirloin steak with crispy potato strings (original "Haystack") or plump chicken fingers ("Hay-Stinger"); or a Niagara County treat - smelt - tiny fish deep-fried and served with fresh-made french fries; or a grass-fed buffalo burger with an onion ring and an apple slice; or even putting nine scoops of Perry's Ice Cream into a red toy bucket and covering them with cookie crumbles, gummy worms and whipped cream ("Sand Dock Sundae").
At the start of this season, Alfiere explained, "It's eating the perfect meals on the river. We have the deck seating on the outside. So, when the sun's out, you're eating your perfect meal under the sun, on the river, with the view. Our staff is trained for 100 percent customer satisfaction, every experience they have with customers."
Local business consultant Stacey Sheehan said The Silo boasts one special added bonus.
"You can go eat a meal (elsewhere) and forget about it before you get home. It's the memories that you make down here on the waterfront," she said. "It's the walking down there, it's the waiving at the boats, it's your little kids throwing their french fries over the edge. It's the memories."
So, whether you're eating inside The Silo's side enclosure or on the patio, "It's more than a restaurant," Alfiere said. "Not only are we serving the amazing food and the novelty sandwiches ... it's the experience that comes along with it, and the atmosphere. Not many restaurants can deliver a good meal - with dessert - with alcoholic options - and have a staff that is so friendly and inviting - and have the atmosphere that we have.
"We have all the good sides of restaurants in one."
She added, "We are what we are because of the customers, and we realize that. That's why we always, always will take the extra step for them."
"We're a fun place to go," Sheehan said.
The Silo Restaurant is located at 115 N. Water St., Lewiston. Visit online at www.lewistonsilo.com. 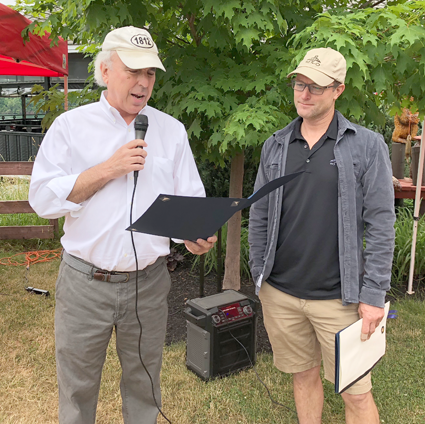 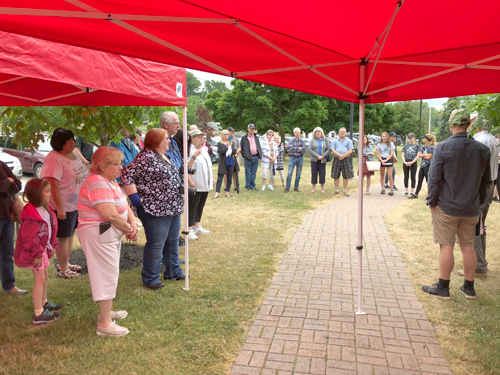 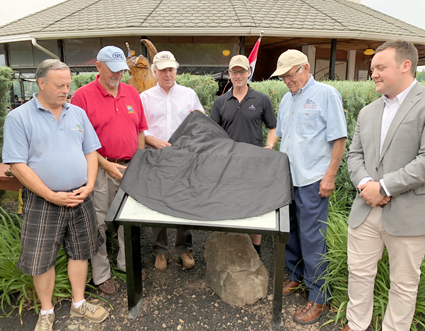 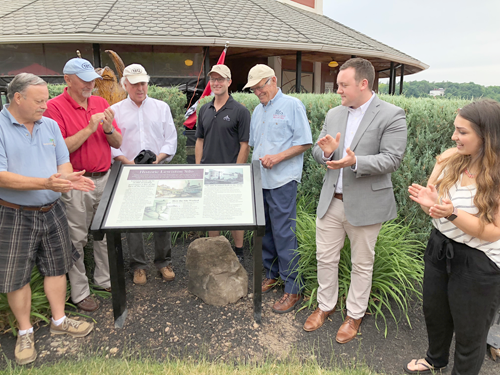 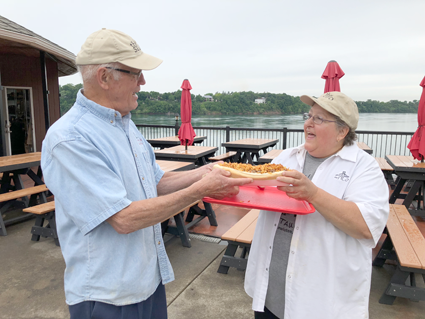 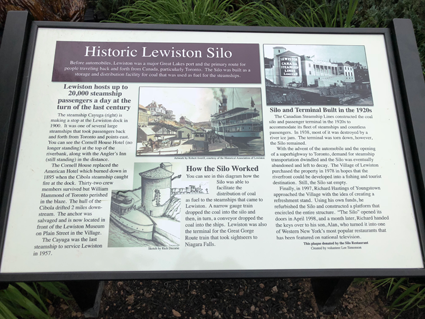