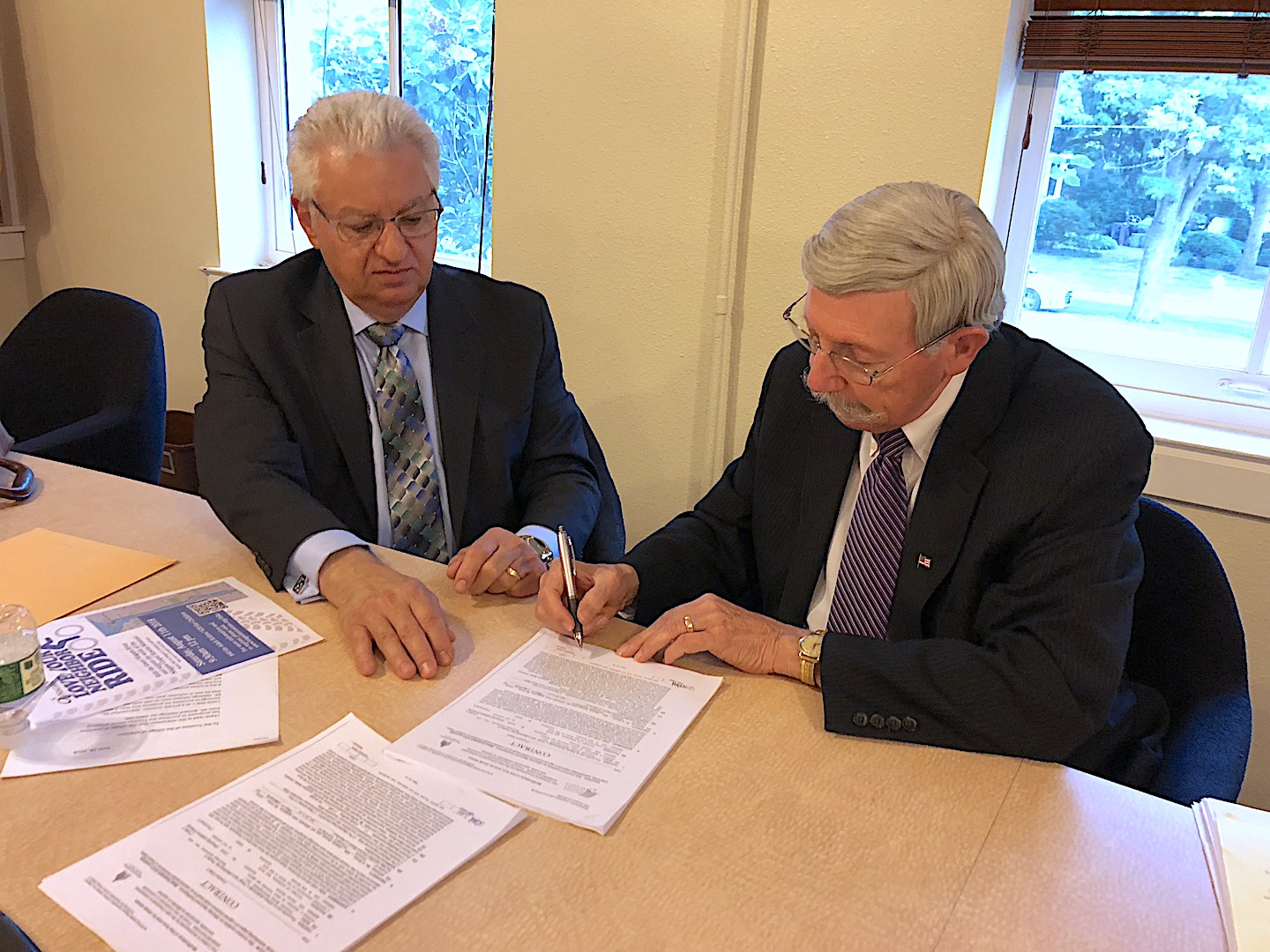 by jmaloni
Mon, Jun 18th 2018 11:25 pm
Municipality will look for financial assistance from Town of Lewiston, possibly via Greenway
Audience reaction mixed
By Joshua Maloni
Managing Editor
Lewiston residents on Monday spoke passionately for and against the village's potential purchase of the historic Frontier House. In the end, trustees unanimously agreed to enter into a contract to buy the building from Hastings Lewiston.
The transaction is contingent on financing, due diligence and the results of a public hearing.
Terry Collesano, who was presiding over his last meeting as village mayor, said, "My way of looking at it is we finally have an opportunity to move forward."
Speaking to a packed boardroom at the monthly meeting, village counsel Joseph Leone detailed the financial terms of the agreement. He also explained each of the three contingencies represent a way for the municipality to decline the acquisition.
"It's been quite a while coming; lots of negotiations; lots of meetings; court appearances; and we finally were able to resolve the terms of the proposed agreement," Leone said. "It has been executed and delivered by the attorneys for the current owners of the property."
The purchase price is $800,000. There is a $5,000 payment due upon the execution of the agreement. The balance of the price is to be paid with the village contributing $400,000. The seller will hold a note and mortgage, amortized for 10 years, but payable in two years. Payment will be quarterly, at 5 percent interest, with the anticipation of a $400,000 balloon payment at the end.
Leone said the village is looking to enter into an intermunicipal agreement with the Town of Lewiston wherein that entity would contribute $200,000 of the first $400,000 required at closing, as well as another $200,000 toward the remaining $400,000 within the two-year timeframe.
The expectation is that this money would come from Greenway funding, though Leone said financing could also come from a private or public lender if the Town of Lewiston declines to get involved. Another option could be the village dipping into its piggy bank. Presently, the municipality has a fund balance of more than $1.85 million.
Former Niagara County Legislator and current Historic Preservation Commission member Lee Simonson congratulated the board for its action and said, "Frankly, this is something that should have happened years ago."
The building closed in December 2004, when tenant McDonald's Restaurant ended its lease. Over the years that followed, Hastings Lewiston proposed lodging, living quarters and a microbrewery, but couldn't find a plan that was economically feasible. The building had been for sale since 2015.
"Over the years, the fate of the Frontier House has caused a rollercoaster of emotions. How many times have we tried to explain the situation to out-of-town relatives or friends, only to tell them that there was no explanation," Simonson said. "Despite the best intentions and efforts of all the parties, nothing happened and the building was left to deteriorate in front of our eyes.
"Tonight is the night to put an end to the years of disappointments and frustrations, so we can roll up our sleeves, move forward, and get the Frontier House restored, bringing Center Street back to a fully functional business district." 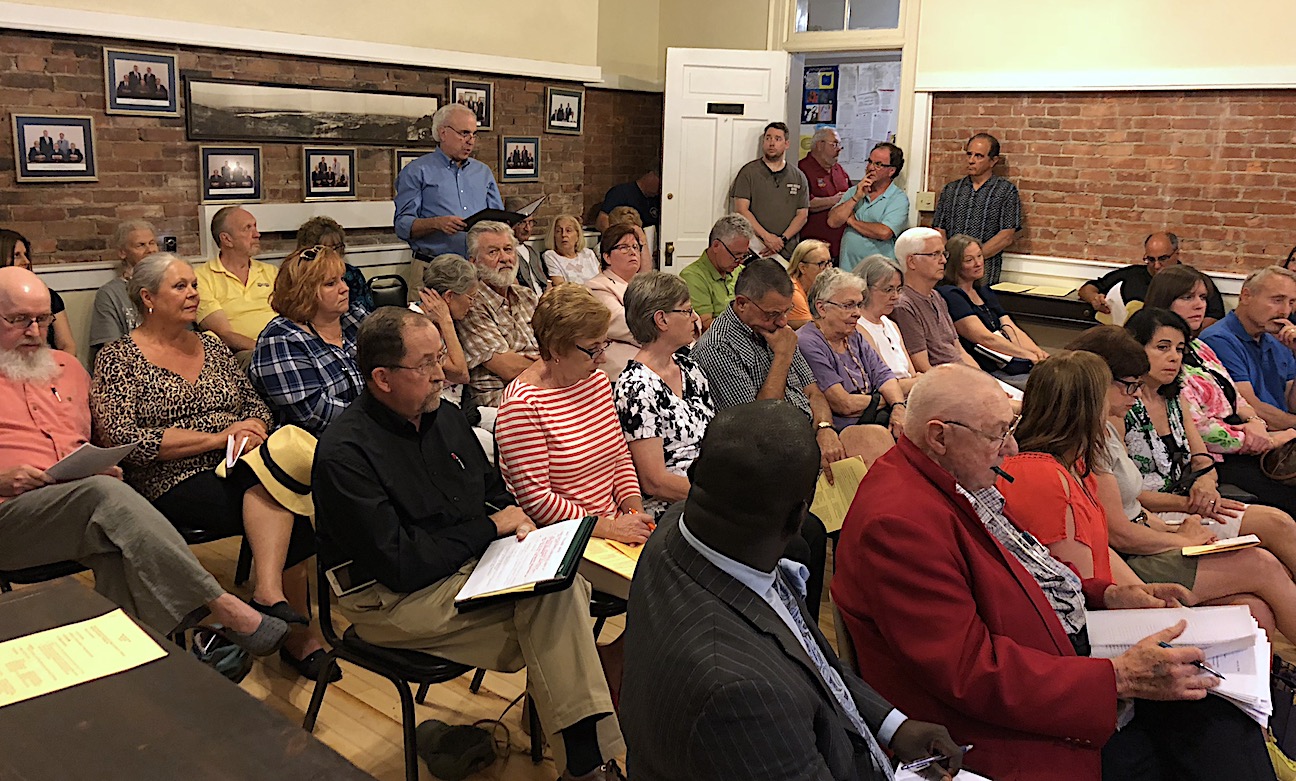 Lee Simonson addresses the Board of Trustees.
Mayoral candidate, former clerk/treasurer and current Planning Commission Vice Chairwoman Anne Welch said the math doesn't work.
"You say you're going to buy this Frontier House for $800,000 of Greenway money and then you're going to pursue grant funding to improve it/maintain it. ... It'll be off the tax roll. But you said you'd like to return it to the tax roll as soon as possible. Well, if you spend $800,000, and then you seek grants, probably over $1 million to fix it, how are you going to return it to the tax roll?" she asked. "It's not possible. Nobody's going to pay that kind of money to buy it back. And it will be on the taxpayers. The taxpayers are the ones that are going to have to maintain it. It's a burden on them.
"And the insurance cost alone, just for a vacant building, it's going to (be) astronomical."
Collesano said he's been assured by grant providers (such as the state of New York) that the village would be in good shape for endowment monies if it owned the Frontier House.
Village resident and former mayoral candidate Jacqueline Lampman said, "You want this historical building here at any cost. I don't want to pay for it. I think the village should have a vote and a referendum. The five of you (trustees) can't make a decision on this. There's too much money involved."
Resident Cathy Federspiel echoed Lampman's sentiment.
"I'm just curious as to why this is such a rush?" she said.
Collesano said another deal with Hastings Lewiston was in the works over the late winter months, but it fell through.
"It didn't happen overnight," he said.
Federspiel said, "There's a lot of 'ifs' with this. ... We're leaving everything up to the mayor, who has 12 days to go (before retiring). ... This building is appraised at $750,000; we're going to pay $800,000 for it. ... Why are we paying so much for this building?"
"Take the time to do this right," she said.
HPC Vice Chairman and Historical Association of Lewiston President Ken Slaugenhoupt said the Frontier House is critical to Lewiston's identity, image and tourism appeal.
"I think about the thousands and thousands of people who come to this village every year, and they almost always describe Lewiston as a wonderful little historical community," he said.
Slaugenhoupt said the Lewiston waterfront was "the hub of activity for commerce in all of Western New York and far inland into America" when it was established two centuries ago. This enabled village patriarchs Benjamin Barton, Joshua Fairbanks and the Porter brothers to become successful, wealthy merchants. Barton and Fairbanks built the Frontier House, which is "a third part of the picture here in Lewiston that talks about the significant historical value of the early years of this community."
In a press release sent out Friday, Collesano said the village is ultimately looking for a private developer for the Frontier House. On Monday, he suggested "something favorable could be coming up."
"I know that there are people looking at it right now from outside and are considering getting involved in one way or another," Collesano said. "There may be some more exciting news coming out before the public hearing, (so) give it a chance. We've got 120 days to work on it, so give it a chance."
Hastings Lewiston is now required to provide "due diligence items," within 10 days, Leone said. This includes "any existing abstract and title, survey; any plans that they may have had for the property; any engineering reports that they have in their possession.
"The village has a 120-day due diligence period after the execution of the agreement. That 120 days will allow the village to obtain any reports that the village deems appropriate. For instance, architectural studies, engineering studies, building studies; to determine whether or not the village believes that the investment is a sound investment for the village or not."
If the board cannot find financing, or if trustees consider the process to rehab, reopen and insure the 194-year-old Center Street landmark untenable, and the cost too high, "the village has the ability to withdraw from the contract, receive its down payment back in full, and proceed with the prior litigation (related to alleged exterior building code violations) that has been commenced in the Town of Lewiston Court," Leone said.
He requested the Village Board schedule a public hearing regarding acquiring historic property. Trustees agreed, and set a time and date: 6 p.m. Monday, July 16.
For more on this story, see: 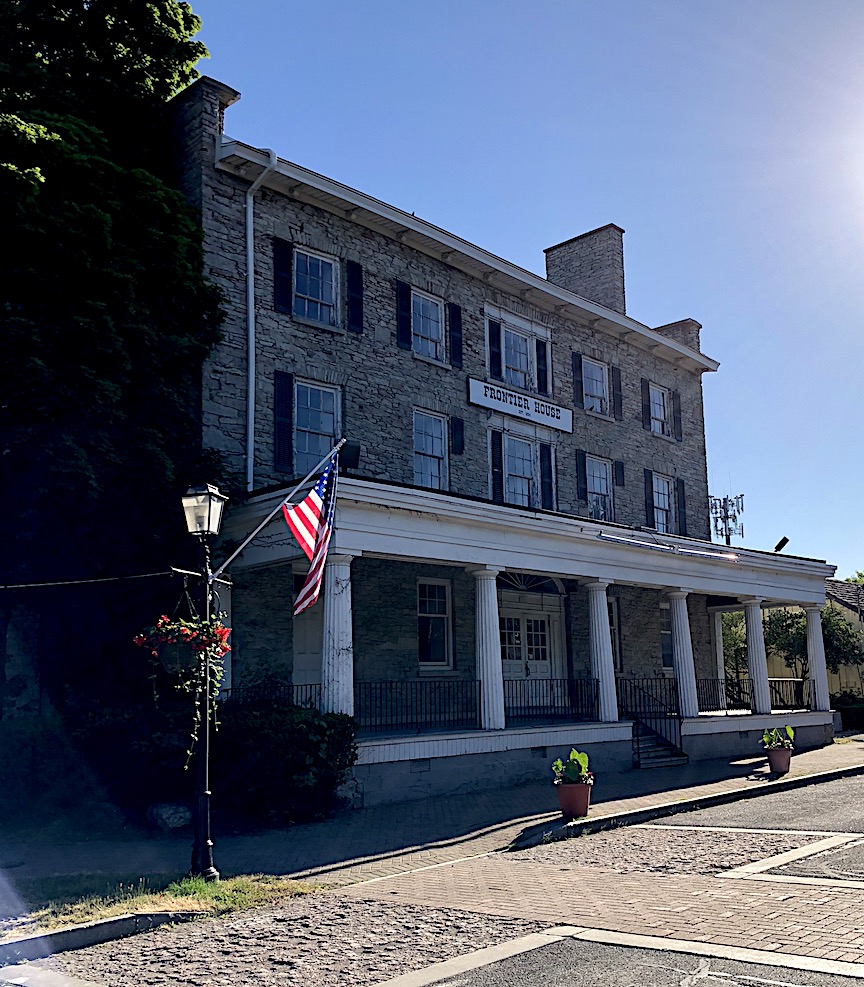