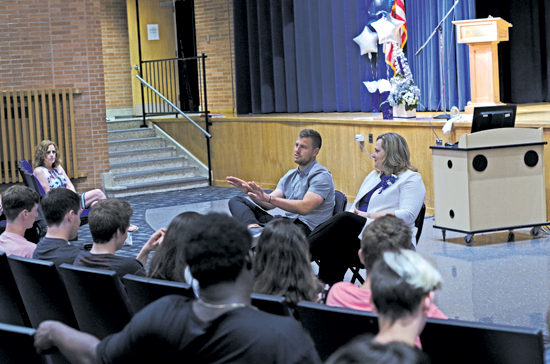 Sat, Jun 9th 2018 07:00 am
By Larry Austin
Island Dispatch Editor
The Grand Island Central School District introduced three new members of its Distinguished Alumni list at a ceremony June 1.
The district honored Dipak Srinivasan, Class of 1995, a space mission developer and implementer at the Johns Hopkins University Applied Physics; Stacey Schroeder-Watt, Class of 1992, and pediatric anesthesiologist at the new John R. Oishei Children's Hospital in Buffalo; and Brett Kern, Class of 2004, Pro Bowl punter with the Tennessee Titans of the National Football League.
Schroeder-Watt and Kern visited the school and spoke with students at Connor Middle School and Grand Island High School, while Srinivasan addressed the students on tape.
Connor Middle School Principal John Fitzpatrick said that, in seeing the Distinguished Alumni, the middle-schoolers "were exposed to tradition of excellence, hard work, sacrifice, commitment that truthfully aren't just words because you see those words embodied in Brett and Stacey."
Schroeder-Watt is still the state track and field record holder in the discus and was a top collegiate athlete at the University of Florida. She has gone on to become a leader in medicine and recently she helped lead the local fundraising effort to establish a Grand Island room of care at the new Children's Hospital.
"I was honored. It meant a lot," she said of her induction into the school's Distinguished Alumni. "I walk through the halls now with my daughters and I point out the awards and I show them and say, 'This means something to your mom. This is part of your history.'"
"It's a huge honor to be recognized by your high school and to know that you're making a difference in the community, whether it's Nashville or here, and making an impact on kids," Kern said.
Kern was a great all-around athlete at GIHS but didn't take up punting until his sophomore year of high school.
"I wasn't even punting footballs in middle school," Kern said, recalling that he loved soccer and was interested in meteorology.
Kern said his message when he spoke to the students was to follow their passion.
"For middle-schoolers and even high-schoolers, find something that you're passionate about, that you love doing, and going out there and doing the best that you can at it, and have fun doing it," Kern said.
Schroeder-Watt enjoyed the opportunity to speak to today's students, saying, "Somebody's out there that's going to be even better than all three of us. Somebody in that audience is going to attempt to change the world. And I hope if we had a small part in that, that makes it all worthwhile."
Categories
Dispatch Dispatch feature NFP