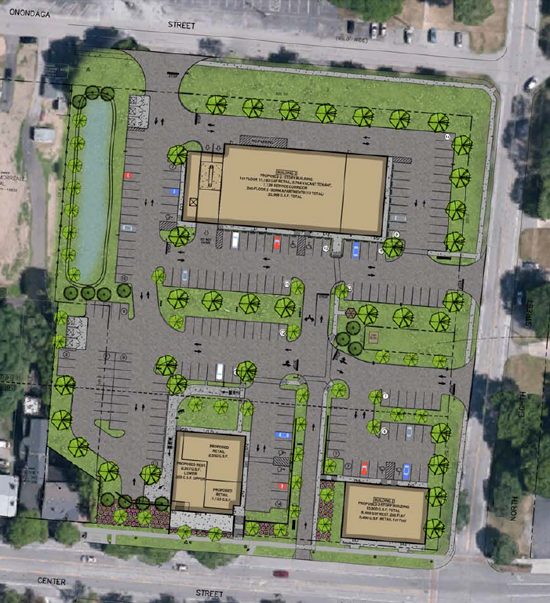 Pictured is an artist's rendering of the Ellicott Development plaza. A new detention pond is shown in the top left corner. Below that is a newly configured parking area.

by jmaloni
Sat, Jun 2nd 2018 08:00 am
Leone says project is stopped pending further ZBA action
By Joshua Maloni
Managing Editor
As reported in last week's Sentinel, delays in construction of a new plaza on Center Street in Lewiston led the Zoning Board of Appeals to rule previously granted variances had expired. The ZBA's unanimous opinion is that construction should've begun on the project within one year of the granting of eight village code modifications - by late July 2017.
In an email to The Sentinel on Saturday, William Paladino, CEO of project applicant Ellicott Development, said his company has made a good faith effort to complete the project, despite a lack of building(s).
He wrote, "Regarding Lewiston, I did do all my due diligence upfront and their delays before our last approval seriously hampered our development and we lost substantial tenancies."
On May 22, the ZBA members expressed dismay at the potential for what they deemed a significant site plan revision. A proposal presented to the Planning Commission almost two weeks ago calls for a west/northwest detention pond. To accommodate this addition, more land is required and some parking spaces would have to be moved and/or resized.
Moreover, the detention pond would likely have to empty east - across the length of the plaza - because the village has said it will not allow westbound drainage.
"From the beginning we tried to do a detention pond because we know underground is so expensive and they said 'no,' they don't want one, so I tried to do it their way with underground detention. The numbers were even higher then I could ever envision so that is what precipitated the request for the change," Paladino wrote. "The additional property was acquired more so to assist in eliminating some further cost being the retaining walls and make the plaza more aesthetically pleasing and to add some parking. It's a better plan."
In a sidebar article, village trustees said they were disheartened to learn of the proposed plaza changes and the potential for additional delays on a project they approved in the winter of 2016.
"I was very disappointed to hear Mr. (Vic) Eydt's comments about not doing our due diligence. We did and Planning Board members know we did. I asked in the beginning and knew a pond was the way to go. We asked to find places to place on site or along Onondaga and they said 'No,' " Paladino wrote. "They didn't want one, so we tried it differently. The project would maybe have still been affordable the old way if we would have still had our original major anchor tenants, a pharmacy and McDonald's, who we lost because of the long, contentious planning process."
It took four years for Ellicott Development to gain plaza site plan approval for the 1.4 acres of property at Center, North Eighth and Onondaga streets.
Now, the ZBA could not void the variances based on the put-forward plaza changes because they were simply that: proposed. Rather, the board opted to use a due-date clause in the village code to rule the variances null.
On Wednesday, following a special meeting of the Village of Lewiston Board of Trustees (not related to the plaza project), municipal counsel Joseph Leone said the applicant's new proposal and the ZBA's opinion have created a tenuous situation.
He explained the question is whether or not Ellicott Development has a vested right to complete its project.
"Ordinarily, a vested right to complete a project means that there has to be a substantial contribution towards making that project go forward," Leone said. "Has the applicant made a substantial contribution? Well, we know that they've cleaned up some brownfields things. We know that they've done their engineering studies and had their legal and so forth. But, they've also asked for changes to the project. So then, the next question becomes are the changes to the project that they've made substantial or not."
The Planning Board said "no," while the ZBA, Village Board and Project Liaison W.E. "Skip" Hauth said "yes." Engineer Mike Marino didn't offer an opinion.
With regard to the scope of changes, Leone said, "My feeling would be that you do a project, and that had a particular look to it, and parking spaces that are a particular dimension. Now you're going to put a pond in the middle of the residential area of the village. To me, that's a substantial change. ... But I'm not a voting member of the board."
Leone said the ZBA's opinion is "viable" and members "acted appropriately."
He further stated that the ZBA granted variances for a certain type of project and that the wished-for changes would make the plaza project something different.
As for revoking the variances, Leone said, "The question of 'Whatever we (the ZBA) have already approved is expired' seems to be if you're looking just at the timeframe. But the question is do they have a vested right by way of the effort that they made towards completing the original project. That's the $64,000 question right there."
He added, "My opinion is that the project is stopped, because the applicant has come in and asked to amend their project. And the ZBA has said, 'OK,' but the variances we gave you before no longer apply.' Now, if the applicant still wants to go forward with the amended project, go to the ZBA.
"I think the tougher question is, what if the applicant wants to come forward and say, 'Forget the new one, we want to do the old one.' Then the question is do we look just at the timeframe that's gone by, or do we look at the investment that they've made and the effort that they've made towards going forward."
As of press time, the ZBA has no agenda items to rule on at its June 26 meeting.