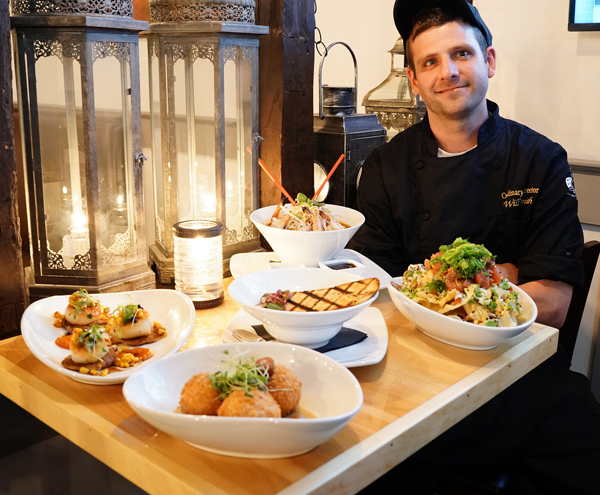 Take a bite out of Lewiston

Mon, May 7th 2018 12:50 pm
This small village has a world-class food scene
By Michelle Blackley Glynn
Forget the big cities: Foodies need to look no further than Lewiston for a unique culinary scene. This charming village is being recognized for its eateries, due in part to the new restaurants offering nontraditional fare.
While food lovers may be focused on cosmopolitan destinations for funky eats, locals know this tiny place has a lot to offer. In the past two years, the main thoroughfare known as Center Street has welcomed the addition of The Griffon House, Gallo Coal Fire Kitchen and Brickyard Brewing Company, to name a few. These new establishments have brought a renewed pride to the area, quickly making this quiet, riverside community a culinary hotspot.
The fourth opening of the locally known The Griffon House is a dining establishment with a concept focused on unusual pub fare, including kanga - ground kangaroo, white cheddar, applewood, smoked bacon, onion ring and smoked paprika aioli - as part of its "100 Acre Wood Slider Trio" (piglet and rabbit complete the dish).
"Get it: Winnie the Pooh lives in Hundred Acre Wood," said Ken Scibetta, co-owner/co-founder of The Griffon House. "People like unique food, especially when it's not pretentious, crazy expensive and not too far off the beaten path." 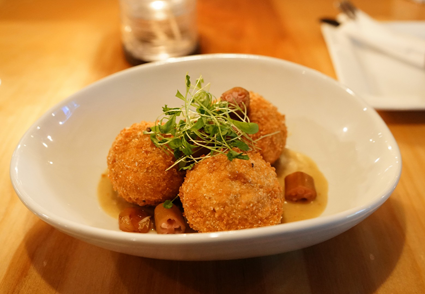 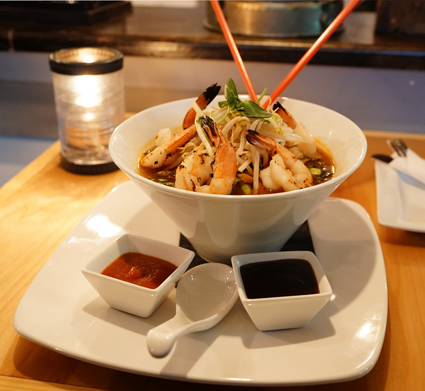 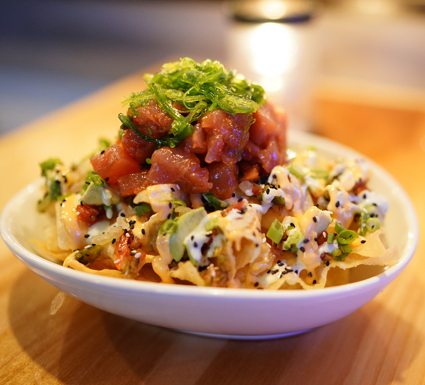 The Griffon House boasts a menu filled with specialty items exclusive to the Lewiston restaurant. Pictured, top: gumballs; middle: shabu shabu; and bottom: tuna nachoes.
Less adventurous eaters can tempt their palates with the Griffon's "Gumballs." These aren't your Italian grandmother's rice balls, also known as arancini. No, The Griffon is doing a different take on them, ala New Orleans style, with fried shrimp and sausage gumbo served over dark Cajun roux with pickled okra and micro cilantro.
Think traditional gumbo, rolled into a ball, with a cornmeal crust and deep-fried. A mix of traditional Cajun Creole food prepared like a traditional Italian rice ball with a signature Griffon flavor.
It's crazy delicious.
"We use recognizable ingredients in a different way," Scibetta said. 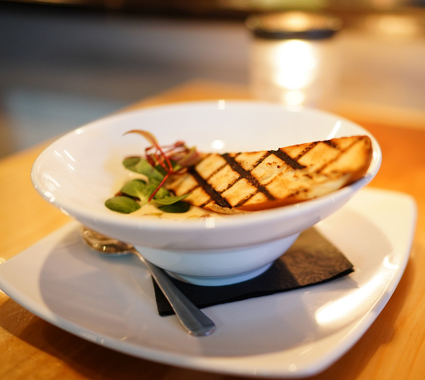 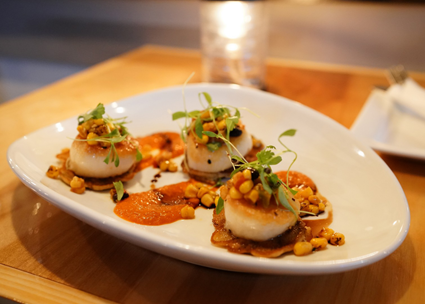 Two more popular items at the Griffon House are the beer cheese soup and seared scallops.
There's nothing more recognizable than pizza and, as the brick oven pizza trend was heating up across the nation, Lewiston finally caught up with the craze, thanks to Michael Hibbard, owner of Gallo Coal Fire Kitchen.
"It's a more authentic way of making pizza, and people love to see their pizza being made; the fresh factor is also always key," he said.
Patrons also seem to enjoy dining-in, Hibbard noted. 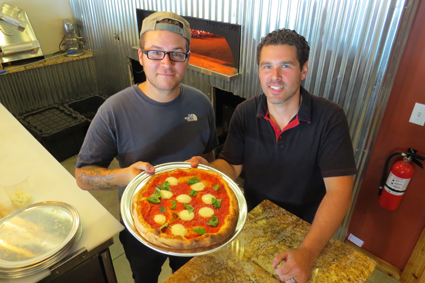 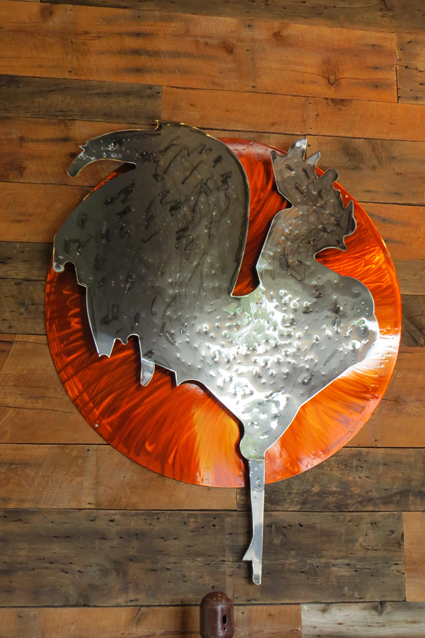 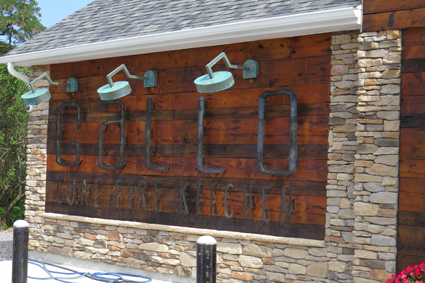 The culinary zeal of Lewiston wouldn't be complete without a craft brewery, or two. When Brickyard Brewing Company (BBC) opened last year, it filled this void. The extension of The Brickyard Pub & B.B.Q. offers some of BBC's best brews and offers plenty of seating.
Still, many beer enthusiasts like to brew at home. Enter Chris Budde, owner of Brewed and Bottled, a bar and retail shop. His store is a specialty craft beer destination.
Budde explained it was a big city influence, and being immersed in an urban environment full of beer options, that peaked his interest in the craft beer movement.
It was something he wanted to bring back to Western New York.
"We opened in Lewiston, because I though this was the perfect community," Budde said. "You can walk the streets and find yourself surrounded by many unique places to eat with so many different options for your pallet." 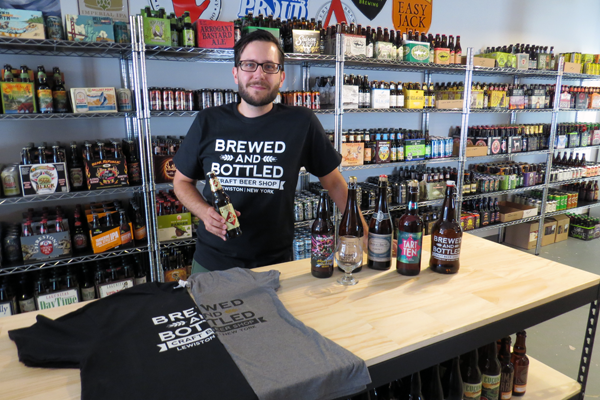 Chris Budde and his wife, Jessica, opened Lewiston's first craft beer store. (File photo)
Being pedestrian-friendly is appealing to diners, according to Jennifer Pauly, president of the Niagara River Region Chamber of Commerce.
"Lewiston has become a dining destination more so recently, not just because of the variety of offerings, but because all of the food is good," she said.
While a visitor to Lewiston for the weekend can experience three very different meals each day, there's also a sense of nostalgia - especially at Brewed and Bottled.
"Older folks share stories of the beers of Western New York's past, Iroquois, Simon Pure, etc., and younger (customers) surprisingly don't know much about the innovators who boomed the modern beer industry," Budde said. "We're lucky to have such a diverse group who all have unique beer drinking experiences."
"Craft is all some know and others remember when there wasn't access to many uniquely crafted beers in Western New York at all," he added.
While the restaurant scene is booming, Pauly said one of the chamber's goals is to eventually have more retail businesses stay open later, to capture the dining crowd.
Visit For Yourself:
Follow Michelle Glynn on Twitter @shellblackley