Thu, Apr 19th 2018 04:40 pm
By Marissa DelVecchio and Carley McMullen
Special to Niagara Frontier Publications
It's the night before you are supposed to be moving in with a new roommate whom you barely know anything about. You're losing sleep, because you're scared this person might be totally different from you. Maybe they're messy. Maybe they have a pet snake. Maybe they smell weird. There are so many things that could go wrong.
Well, don't worry, because whether you are living with someone for the first time, or you've had a bad roommate experience in the past, these college students can offer some advice to help you be the best roommate you can be.
It Can Be Scary, But That's OK
It is not easy to know if you will like living with someone else - especially a stranger. If it is your first time being away from home, it may be a drastic change compared to what you are used to. If you're having this problem, just know you're not the only one. The first time living away from home can be hard on anyone.
"My first year was kind of rough," said Mia Byrd, a Niagara University resident. "I wanted to go home my first few weekends, but I made myself stay - and those were the weekends I made friends that I love to this day. It took time to adjust to a new routine, which I was responsible for, especially because you have so much newfound freedom."
Independence is Key
When living with another person, mostly everything is shared, but the truth of the matter is not everyone lives the same way. Because of this, it is important to have your own personal space.
"Living with others is a tricky balance of self-care and self-sacrifice. You must learn that, while you may be the center of your world, there are other people in the world," said Keelin Higgins, a student who has lived on a college campus for four years. "I found this most difficult when I had to share a room with other people without having my own secluded space. I'm an introvert, and constantly having to be with someone else's energy was really exhausting. Yet when I lived alone, I didn't socialize as much and that wasn't a good thing for my mental health, either.
"Having an apartment really rounded out my needs. I have a room to myself, but I have to share living spaces with others. Sure, it can be really annoying, but we're all annoying. I leave my socks around, and someone else leaves their hair in the drain in the bathroom or their dishes in the sink all day. When it comes down to it, those are the things you can let go, because the other side of it is so much more important." 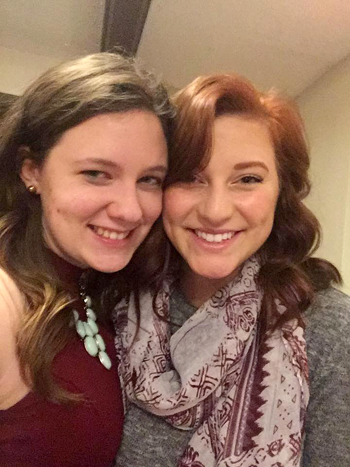 Keelin Higgins pictured with her first roommate, Marissa DelVecchio, after living in a single dorm room for three years.
Honesty is Best Policy
A big part about getting along with a roommate is communication. That means being honest. If your roommate does something that you don't like, you have to tell them or nothing will ever change. This honesty can sometimes lead to being uncomfortable, but it can have one of the biggest rewards.
"Set boundaries and come to agreements from the start!" Byrd said. "It makes it so much easier to avoid problems and maintain a good friendship if you're open, honest, upfront and respect each other. But usually your roommate ends up becoming your best friend, and it's amazing having someone to be with you as you both adjust to college."
Remember, you might also have to compromise things in order to get along with a roommate. However, you should know what things you don't want to compromise on so you find the right roommate.
"Having a roommate is something that makes you feel more mature once you get to college. You learn how to coexist with another person and get along despite your differences," said Nicole DeLucia, another Niagara University resident. "I've learned over these past three years that, in order to feel comfortable living with a stranger, you have to be willing to compromise and have discussion about your living styles."
Don't Worry
It's OK if things don't work out with a roommate or you want to move back home. Commuting to campus or living with your parents can still give you the opportunity to have a social life on campus and in the community.
It's Costly
What may put you off dorming could be the high price you'll pay for it. When it comes to paying for tuition, fees, food, books and other expenses, the bottom line is it might just be too expensive to add in the cost of dorming.
The thought of going away to college sounds exciting, but it is also important to understand the cost of it all.
"I do wish I would've dormed maybe for the first semester or two, but at the same time it would have been too costly," said student Nadine Husami.
It is OK if you decide it is too much to afford in the long run. There are still ways to have a great college experience.
Get Involved
One of the most important things to do while at college is get involved on campus. It is an easy way to make friends and memories.
"Commuting is OK, just get involved with things on campus," said student Joseph Guagliardo.
"I wish I would've gotten involved on campus sooner," Husami added.
Eventually, these friends that you create by getting involved in the community will help you find friends who may eventually become your future roommate.
And, hopefully, as you continue your life and are ready to move out on your own or find a roommate, these tips will still guide you into becoming the best roommate you can be.
And Remember ...
You cannot control how other people are as roommates without talking to them about it. Even then, it may not be perfect. The most you can do is simply try your best to get along with people and work out problems as they happen.
Just remember, you are not the only one worrying about living with someone new. Your roommate is probably looking for advice on how to be a good roommate, just like you are. 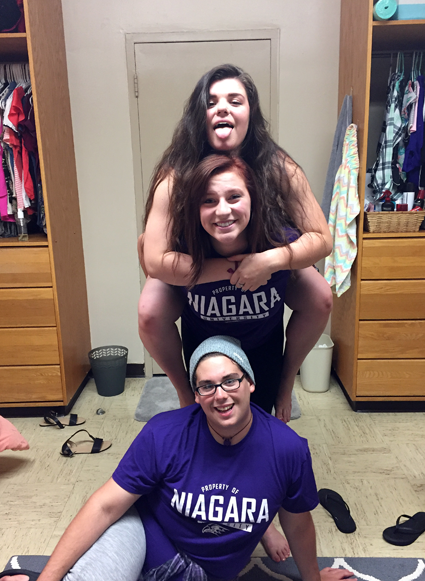