UBCon is on! University at Buffalo's annual anime and gaming convention kicks off this weekend

Wed, Apr 18th 2018 06:00 pm
By Brandon Sturak
Special to Niagara Frontier Publications
When walking down the halls of a university campus, one wouldn't expect to see Mario, Captain America and Goku, much less finding them entangled in an epic Nerf shoot out, or dancing with each other in a ballroom. But for three days, you'll be able to see things like this and so much more at UBCon.
UBCon is University at Buffalo Strategists and Role Players Association's annual anime and gaming convention. It's occurring April 20-22 in a number of the North Campus' buildings.
This is the 29th year the con is running. Every year, thousands of people gather to celebrate their passions of all different sorts in a fun, lighthearted, happy environment.
It wouldn't be UBCon without the traditional Nerf War, where hundreds of people gather to engage in heated battles - where life and death depends on little foam darts. It's one of the biggest Nerf Wars in Western New York, and something you don't want to miss. Other popular events include the Cosplay Contest and the Artist's Alley, with the new addition of a Cosplay Ball being debuted this year. 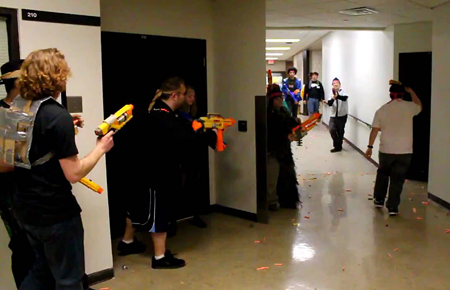 Conventiongoers participate in a tense Nerf battle.
"No matter what you're in to, you're going to find an event that you like," UBSARPA Secretary Autumn Rosenhahn said.
The amount of different events, panels, activities, artists and games to partake in ensures that there is always something that appeals to everybody, no matter who you are. A full list of events can be found at: http://reg.ubsarpa.com/events.
The convention "provides an opportunity for people with niche enjoyments to meet others in the same group," UBSARPA President Sean Teneyck said.
Anime and gaming are the two broad, overarching themes for the event and, as these communities are limited in size and exposure, this convention allows for people to express themselves however they want to, not having to worry about if they'll be judged for liking something weird or different. 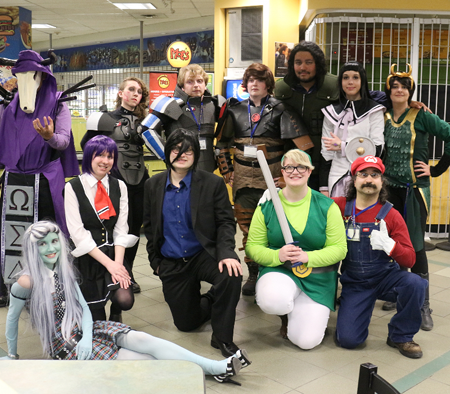 A group of cosplayers showing off their costumes and hard work.
"Say you have a friend group of five to eight people that always get together to do stuff, this gives a better way for people to get out and make new friends, discover things they've never even heard of before, and just have a lot of fun with people they may never usually have the chance to," Assistant Director of UBCon Lucas Heldwein said.
Inclusivity is a cornerstone of UBCon because of the communities it brings together. To people with niche interests, this type of environment is all too welcome, as it can be hard to find an occasion for people to come together like this.
"For a lot of people, it really expands their social environment and, even if they don't want to be social, it gives them an outlet to express themselves," Rosenhahn said.
People travel far and wide to go to events like these, like Comic-Con or PAX to name two of the better-known events. But UBCon distinguishes itself from massive conventions like these because of its local roots. It's a more social environment because of its base in WNY, and people are more comfortable chatting with strangers and making new friends.
Within the organizing club, there are about five main officers, with around 10 others who help, and put together the entire experience of UBCon. Their passion for the event is clear to see.
"Seeing people come and enjoying it is super fulfilling," Rosenhahn said. "It's ridiculous how much work we put in to running this huge event."
Rosenhahn and the other organizers said they love interacting with the congoers, and seeing the cosplayer's, gamer', and fan's smiling faces makes it all worthwhile to them.
Every year, UBCon hosts special guests, including actors, voice actors and professional cosplayers. Last year, the event welcomed Phil Lamarr, who has an extensive and admired career in acting and comedy. People loved it. They still send emails saying how much they enjoyed meeting him and getting to play the fill-in-the-blank game "Jackbox" with him and other fans.
Congoer of nine years, Justin Pope, described the event as one of the greatest times of the year for him, largely due to the experiences he's had with special guests. Aside from his comical experiences, like Chuck Huber ripping a hole in a loaf of bread with only his tongue, or John Patrick Lowrie playing his ukulele to his wife, Ellen McLain, singing, meeting these people and seeing their work has inspired him.
"I went into college thinking I wanted to be an actor, but primarily focus on being a voice actor, because the voice actors in anime have inspired me so much with the power of their voice," Pope said.
This year, fans can come meet Kayley Marie, Sarah Jean Maefs (aka Peppermonster), Spike Spencer and Sarah Anne Williams. 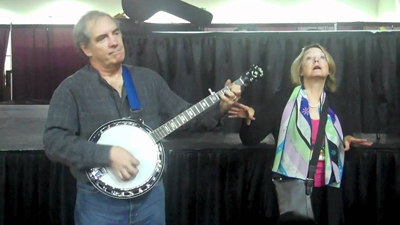 John Patrick Lowrie and Ellen McLain perform "Still Alive" and "Want You Gone" from the game "Portal."
A "League of Legends" tournament will be held with 16 to 20 teams of five battling for glory - and a $1,000 cash prize for first place, and $500 and $250 for second and third place, respectively. The tournament starts at 9 a.m. Saturday for the group stage, with the final games to be held at 9 a.m. Sunday. Visit UB League's Facebook Post for the full event details and how to register.
If one cannot attend but still wishes to watch, the tournament will be streamed at https://www.twitch.tv/ubleague.
Mike Campany, a member of UB's "League of Legends" club, attended the tournament last year and described it as a great experience. "League of Legends" is one of the most played video games in the world, but even so, it has yet to take a hold in mainstream society.
"It's cool to go with your friends and make new ones, because of this one game we love" Campany said. "A lot of outsiders don't take eSports seriously, so getting together in a competitive setting, like professionals, but also friendly, is great."
"For me, it's the only con I go to, because all the other ones are farther away, and I think the fact that it's been growing and growing and growing says a lot about how it's doing for the community and WNY," Teneyck said.
Indeed, with an estimated turnout of around 2,500-3,000 people this year, the event will be able to touch many people's lives.
"It's welcoming, nobody gets turned away, nobody gets critiqued on what they're wearing; everybody is there to have a good time" Teneyck said.
Tickets are on sale now. Preregistration passes for the weekend cost $25, whereas tickets for each individual day costs $10, or $30 for a weekend pass, if bought at the event. Visit http://www.ubsarpa.com/ for more information about the event or on Facebook at https://www.facebook.com/UBCon/.
Categories
NUsUnlimited NUsUnlimited Side Story