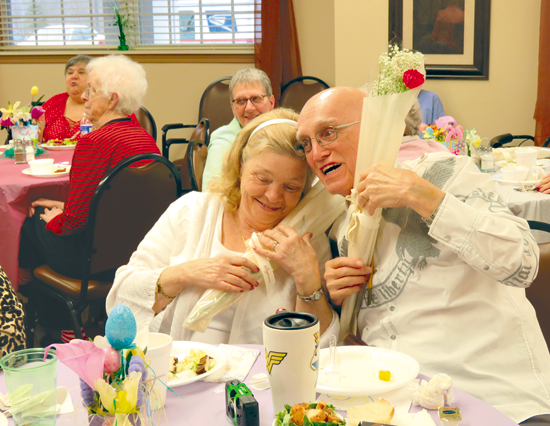 Carl and Liz Blessing, the lone couple, are pictured with their flowers at the 10th anniversary event Tuesday. Also, an anniversary cake was baked to honor the facility's special day. (Photos by David Yarger)

Fri, Apr 6th 2018 04:20 pm
By David Yarger
Tribune Editor
On Tuesday afternoon, the Willow Senior Living apartments, a People Inc. living center, honored its residents who have lived at the complex since its beginning 10 years ago.
The facility at 3990 Forest Parkway held a small gathering with staff and residents celebrating the 10th anniversary. The attendees enjoyed stories, food and a commemorative cake.
Residents who have lived at the facility for the entire 10 years were given a commemorative flower from Manager Charlene Johnson. Those honored included Barbara Hathaway and Elizabeth McCarthy, who have lived at the facility since April 1, 2008; Kathleen Anderson, April 2; Larry Brittian and Margaret Hebert, May 1; the lone couple, Carl and Liz Blessing, May 15; Josephine Lachiusa, May 15; Pauline Scibetta, June 2; Alberta Costanza, July 1; Mildred Birkman, July 3; Joan Mihalics, July 7; Andrea Brant, July 15; Ray Veyksner, Sept. 6; and Diane O'Hanlon, Dec. 5.
Johnson said she was thrilled to honor the 14 individuals and said the residents have a familial-like bond.
"I think people here view everyone as family and that helps to keep them around a lot. ... They're just a wonderful group of people and I don't think any of them would go any place else. I think they're here forever," Johnson said.
At the gathering, the group shared several laughs and all enjoyed the presence of each other. Johnson said the people who come into the facility can expect the staff and residents to be very accepting.
"Staff-wise, they're going to be taken care of; their needs are going to be met. If there's issues with their apartment, they will be addressed quickly. There's always somebody to call ... even if I'm not here or maintenance isn't here, there's still emergency numbers and people to reach. They're supported here and they have a family. I've seen people who have come in and are kind of quiet and keep to themselves, but after a while that's not the case and they just become part of this little family," Johnson said.
For more information on the independent living center, call 716-694-1486.