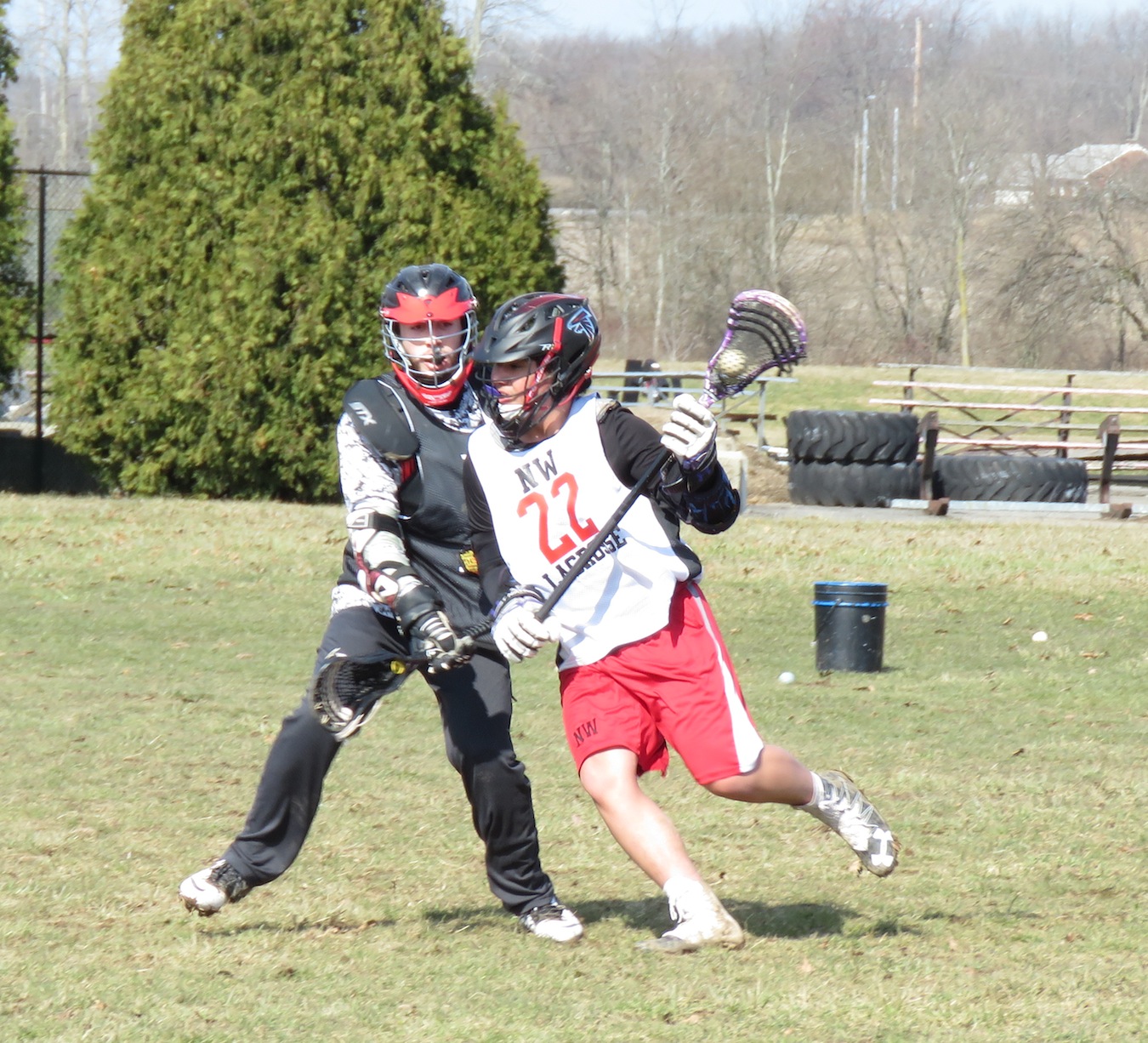 No. 22 JoJo Hoover runs towards the net during a recent practice. (Photo by David Yarger)

Mon, Apr 2nd 2018 03:05 pm
Falcons looking for first sectional title since 2011
By David Yarger
Tribune Editor
Since 2011, the Niagara-Wheatfield boys lacrosse team has faced off versus Hamburg in every Section VI Class B finals. The Falcons have one title win versus the Bulldogs in that time frame. In 2018, coach Vince Schiffert said his team is ready to get back on top.
Coming off a 2017 season where the team finished 11-7 and suffered a season ending loss to the Bulldogs, Schiffert had high hopes for his team and what they could accomplish. After losing 13 seniors, Schiffert remained confident in his young group.
"Offensively we're going to be better this year. Defensively is the question. We have Zack Belter, a potential All-American, Riley Muldoon returning, and then that third spot is open. ... The guys returning are guys that play a lot of lacrosse in the summer. When you go to tournaments in the offseason, you see Hamburg has 15 to 20 guys playing and you have nine or 10. It makes a big difference. ... This year's team has a bunch of guys that have been playing the last couple summers and falls, so I'm counting on that making a big difference over last year's team," Schiffert said.
Belter, the Falcons defensive anchor, recently signed his letter of intent to continue his lacrosse career at St. Bonaventure.
Schiffert continued his praise of the offense and said junior Devin Napoleon will look to build off a strong sophomore season and lead the offense.
"As a sophomore he was Second Team All Section VI midfield. I have no reason to suspect why he can't improve on that this year. He's already do a dynamite job," he said.
Schiffert also noted Bobby Bruno, Jordy Smith, Elias Dowdy, Joel Hocking, Desmond Pickel, JoJo Hoover and Austin Leber would all have big impacts on the team.
The Falcons have two games under their belt so far, both resulting in wins. The first was a 19-1 win over Buffalo Co-op, then a miraculous come-from-behind win in overtime over Williamsville East, 11-10.
Versus Williamsville East, the Falcons trailed 9-4, before staging the comeback. Schiffert said, "The veterans picked up their intensity and matched the intensity that Will East had. Devin led a tremendous comeback. He had like four straight goals in that game. ... The team defense; They weren't giving East the kind of shots they had in the first half."
Despite rivalries and expectations, the team also has a different set of purpose for this year. Just over a month ago, the team received word that one of it's own, Michael Ziegler, had passed away. Along with stickers on their helmets honoring Ziegler, Schiffert said "Ziggy" was an essential member of the team and he believed a lot of his players want the season to be a success for their fallen teammate.
"He was a huge part of this team. There's definitely guys on this team that were close to him," he said.
Schiffert added that Ziegler had reached out to several new players and recommended they join the team. With that, Schiffert said he made no roster cuts and "there was no way I could've cut anybody after what just happened. I can't pile on more grief by cutting someone."
With a group of 13 seniors, 18 juniors and 4 sophomores, Schiffert said there was a different vibe compared to past teams.
"It's a different feel," he said. "Some of the new guys are bringing something. Maybe it's (because of) Ziggy, I don't know. There's a different feel to this team and so far so good. It's been a good spring so far and hopefully it'll continue on."
Playing for the Falcons may not be the easiest task, as it's expected the team reaches the sectional final every year. That expectation could lead to added pressure, but Schiffert said he wouldn't call it pressure and he expects to get every team's best effort.
"There's plenty of other teams that would like to knock us off and there's plenty of other team's who'd like to knock off Hamburg. I think the idea is to get in on the other side of the bracket of Hamburg and take Wheatfield out. ... We've had some battles, ... there's been some one-goal games, crazy comeback games and somehow the boys find a way to get the job done.
"I think we've created a culture here - the last 10 years - where it's expected now. These guys come up from JV and they're expected to keep this going. One of these classes are 'Who's going to be the one to knock off Hamburg?' Belter has put a lot of effort into that as a senior and leading the boys. ... I think this is the team that can do it. This is the prime opportunity to do it and I think the boys are ready," Schiffert said.
The Falcons' season continues at 5 p.m. April 11, at home versus West Seneca West. The sectional final rematch versus rival Hamburg is on the road at 7:30 p.m. April 18. 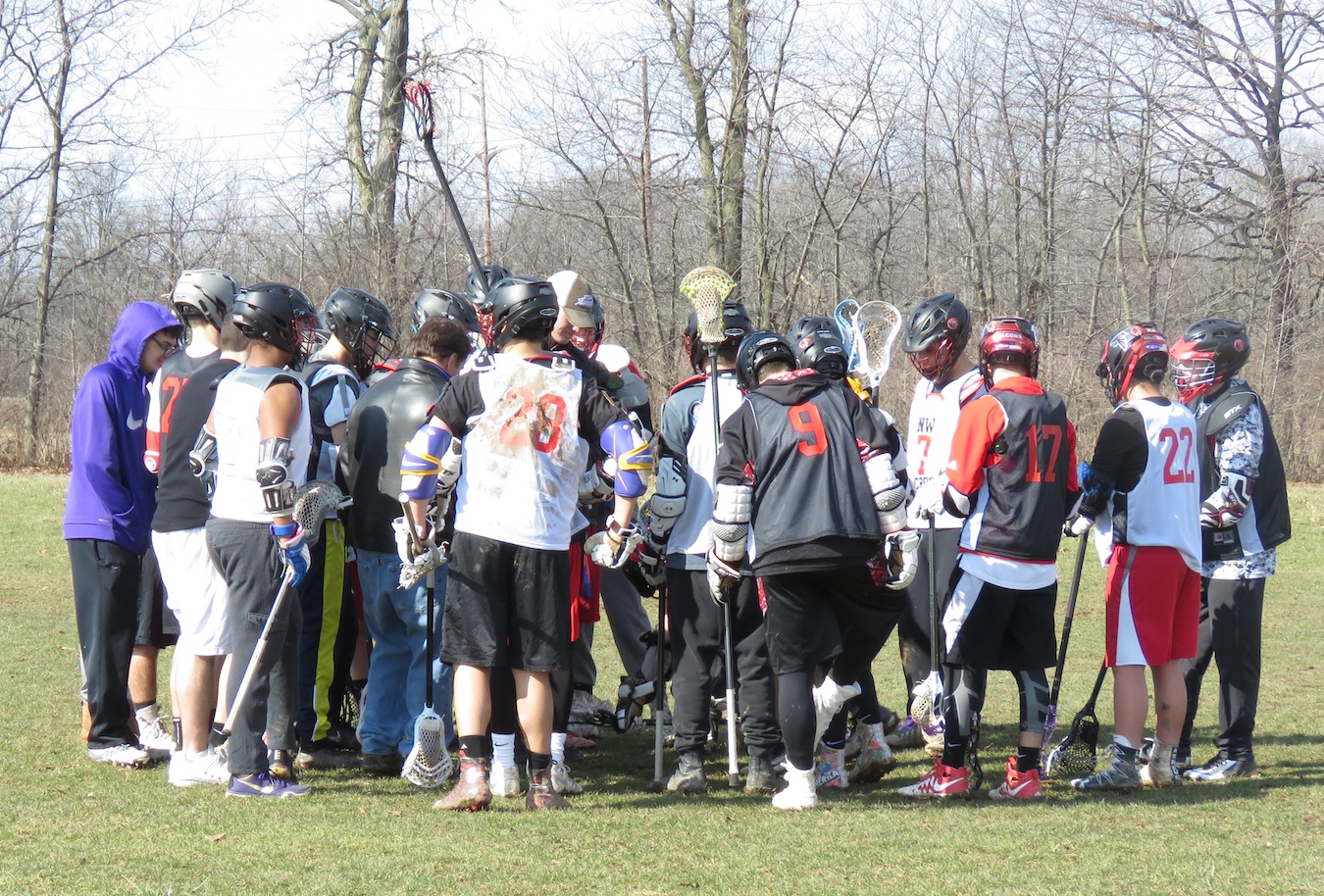