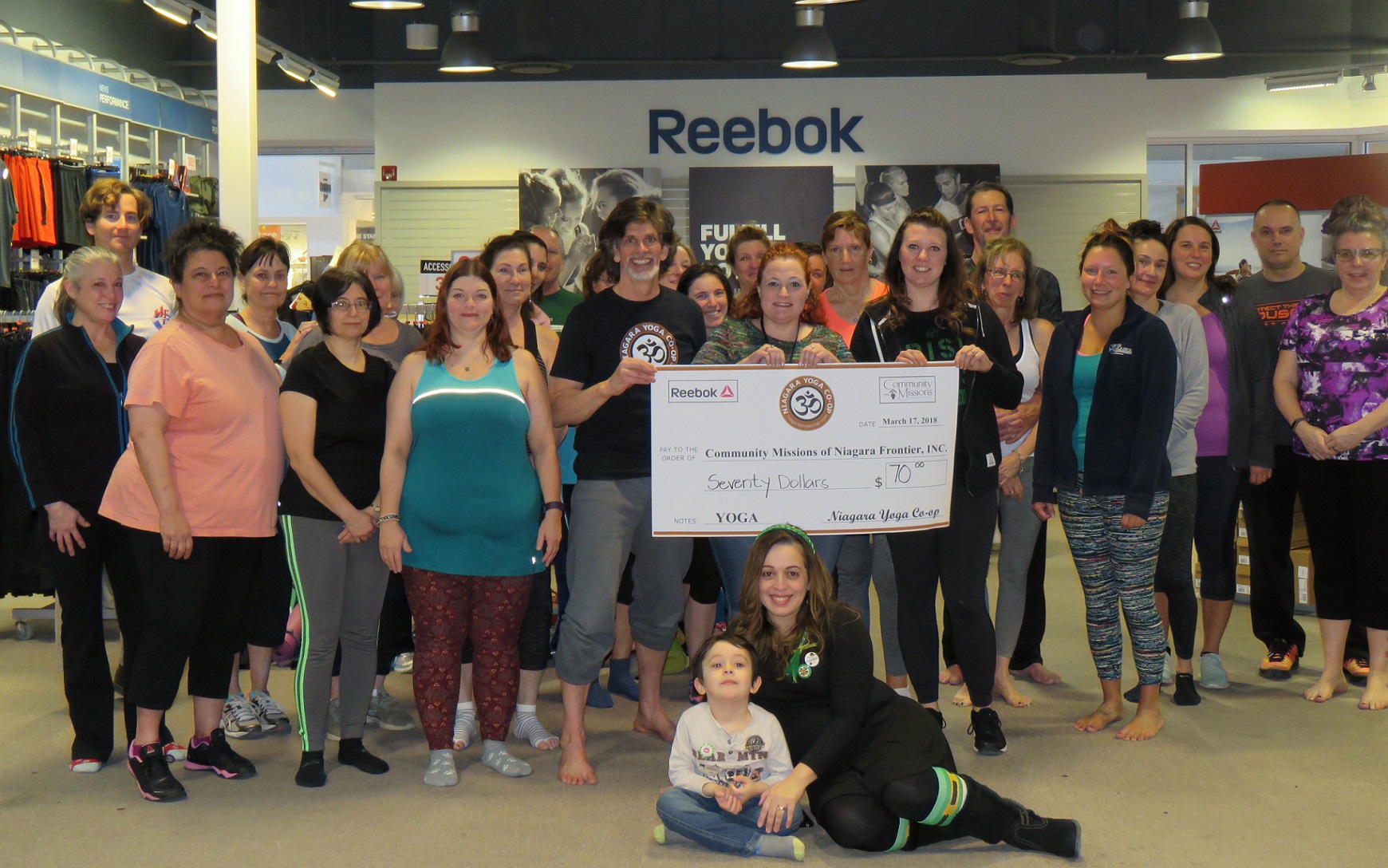 Sun, Mar 18th 2018 07:45 pm
Yoga group given space from Reebok at Fashion Outlets to conduct beneficial class
By David Yarger
Tribune Editor
Early Saturday morning, before people began the St. Patrick's Day festivities, around 35 people came to Reebok in the Fashion Outlets for some beneficial yoga instructed by Brian Ball of Niagara Yoga Co-op.
The group came together to raise money for the Community Missions of Niagara Frontier. Attendees paid $10 for a one-hour session with Ball and 25 percent of the proceeds were given to the mission. In all, the group raised $70 to go back into the community.
Ball was honored to put on the event and was grateful the mall and Reebok donated their space for the session.
"It's hard to put into words," Ball said. "Yoga is something I really love. I've been doing it since I was 16. Time after time after time, and working with various people, they come to me and say 'Wow, you can not believe how much you helped me with this or with that.' You wanna do some good in the world and part of that is getting the word out.
"Through the mall here ... we were able to come in contact with Nicole (Quarantillo) from Reebok. She offered her store space, as well as discounts to those who attended. So, we basically put our heads together and organized this event. One of my student's volunteers at the Community Missions and I've always respected her for that, I thought it was really great that she does that. So, when we thought about doing a charity event, I though of the Community Missions ... because of her influence."
Ball called it a "pay it forward" type of event and was pleased with the turnout.
Ball added that he reached out to the mall and was notified that several stores were interested in sharing their space.
Stacey Menard, kitchen and pantry supervisor from the Community Missions, was excited about the event and praised what the mission is all about.
"I'm so passionate about my work. ... I love getting up and going into work every day. All the money we get goes right back into the mission. ... We give back out, so I really enjoy that part and that's one of the things I'm proud of about the place," Menard said.
Quarantillo, Reebok store manager, said by donating the store space, it shows that Reebok cares about everybody in the community. She added that she loves to give back.
"I love helping any type of organization out there. I'm very much about the community. Personally, my husband and I are in the fire companies in Youngstown, so it makes sense that I bring that to my work environment.
"I want my staff to see that by Reebok helping others, it's not just about the brand, it's not just about making money for the store, it's about the entire community, not just about us," Quarantillo said.
Attendees were gifted a 40 percent discount at the store, along with a Reebok tote bag. Also, David's Teas donated complimentary tea and Niagara Yoga Co-op gave attendees a buy-one-get-one class pass to the shop.
Ball said with such a good turnout, he's looking into setting up more events like the one Saturday.
For more information on Niagara Yoga Co-op, visit their website at www.niagarayogacoop.com or call the shop at 716-957-6805. 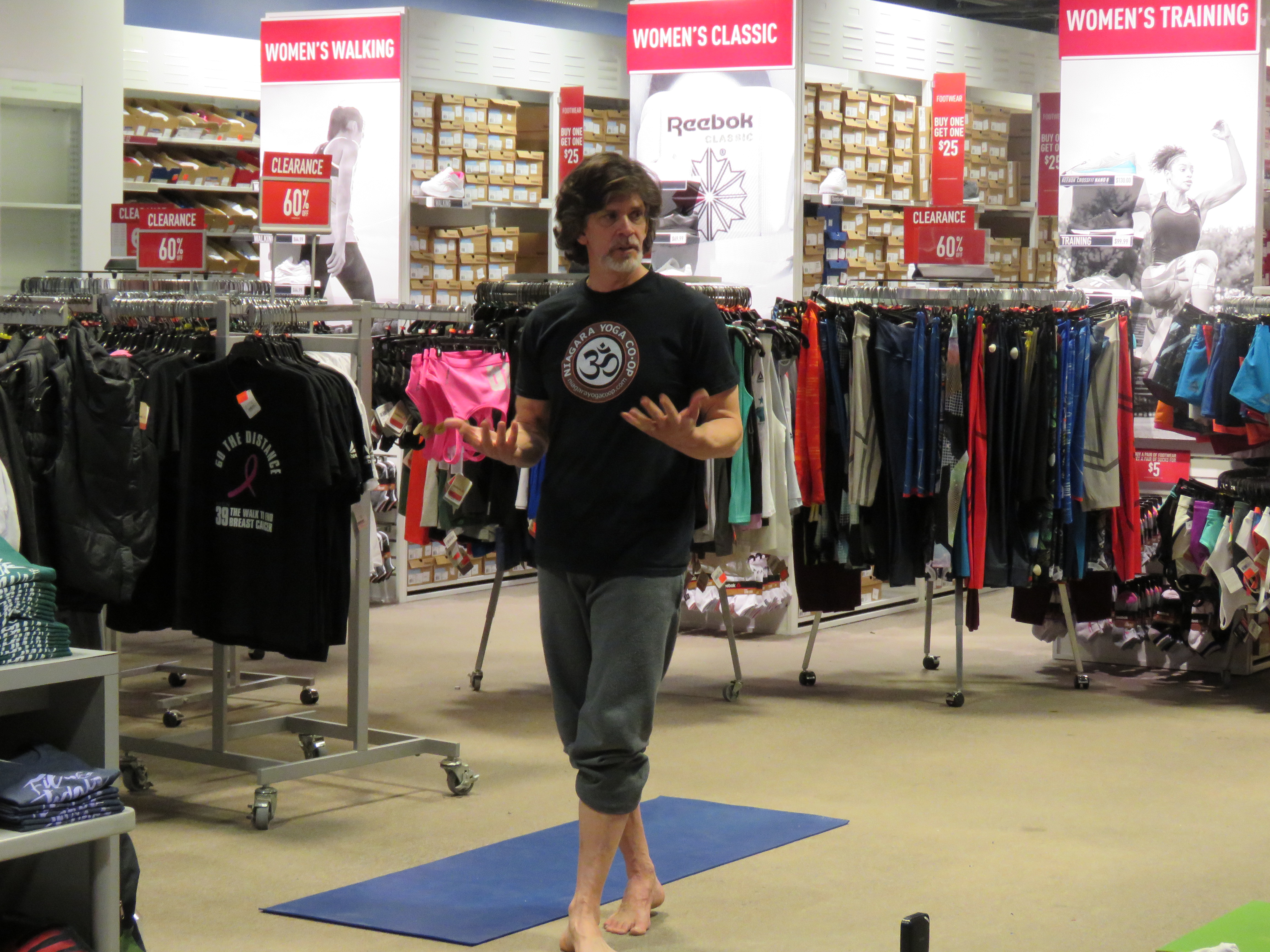