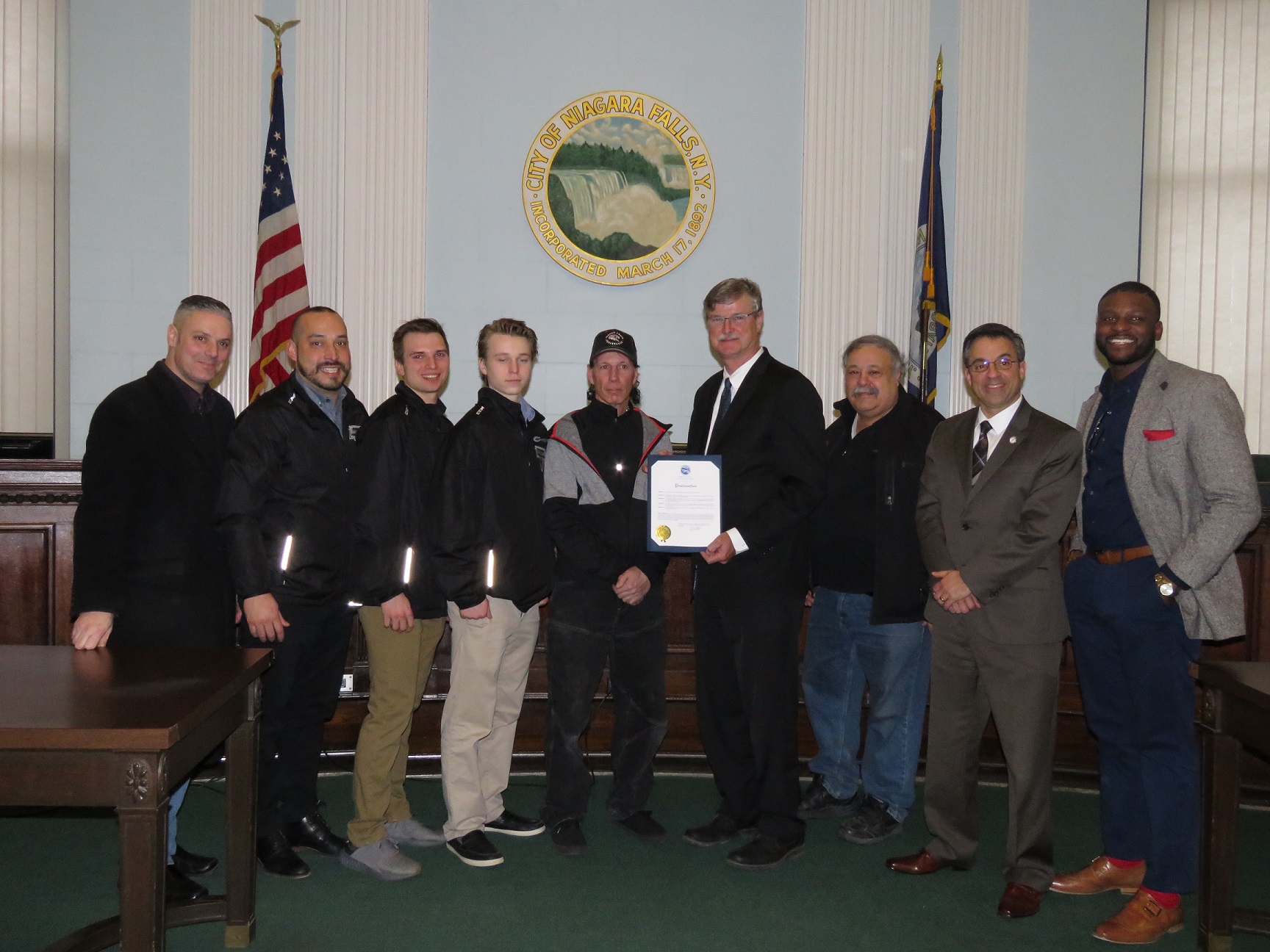 Mon, Mar 12th 2018 07:05 pm
Junior hockey team reached postseason in first season in Cataract City
By David Yarger
Tribune Editor
On Monday evening, Niagara Falls Mayor Paul Dyster issued a proclamation honoring the Niagara Falls Powerhawks hockey team for their success in the 2017-18 season, which is their first in Niagara Falls.
Formerly known as the Lockport Express, the Powerhawks compiled a record of 25-19-1-2 and clinched a playoff berth to extend their season.
The Niagara Falls Junior A hockey team, who play their home games at the Hyde Park Ice Pavilion, is part of the NA3HL, which includes teams from the northeast all the way to Montana and Wyoming. The players range in age from 16-20 and the goal, as a tier-3 league, is to develop players to reach tier-2, which helps players extend their hockey careers to bigger and better opportunities.
Dyster said it's terrific for Niagara Falls to have the Powerhawks and he hoped citizens would go out and support the team in their postseason quest.
"It's very exciting," Dyster said. "I had forgotten how high quality this hockey was. These guys start steaming down the ice and I was like, 'Man, these guys can fly.' So, it's an opportunity to see some really high quality hockey in a very intimate setting and it's not going to break the budget.
"This is a great thing to do with your family. ... This is so easy you pull up, you park, you walk in and you got a great seat for some really fantastic hockey. I think it's something that people in the City of Niagara Falls ... can really get behind."
For head coach Jason Hill, taking his team to the playoffs meant a lot because he and his family have been a part of the local hockey scene for many years.
"I grew up local here in the Cataract City. I played for Grand Niagara Cataract, which is now the Niagara Junior Purple Eagles. I was fortunate enough to get drafted to the OHL. ... It'd be an honor to myself and my father late Gary Hill. He was big hockey advocate in the area and that's kind of why I'm trying to carry on this dream for him, for these boys and the City of Niagara Falls," Hill said.
Hill added that attendees can expect to see players play with a grit and style that might not be seen at the professional level, and attendees will "get the best bang for your buck."
The Powerhawks will host the Skyland Kings in the first round of the playoffs. Dyster and Hill encouraged the community to come out and support the team as they look to win a title.
The best of three series starts at 9:30 p.m. Friday and continues at 8:30 p.m. Saturday. If necessary, game three will be played at 2:30 p.m. Sunday. All three games will be played at the Hyde Park Ice Pavilion.
For more information on the Powerhawks, visit the team's website at www.nfpowerhawks.com, follow them on Twitter at @NFPowerHawks or visit the team's Facebook page.
Categories
Around WNY Home feature NFP