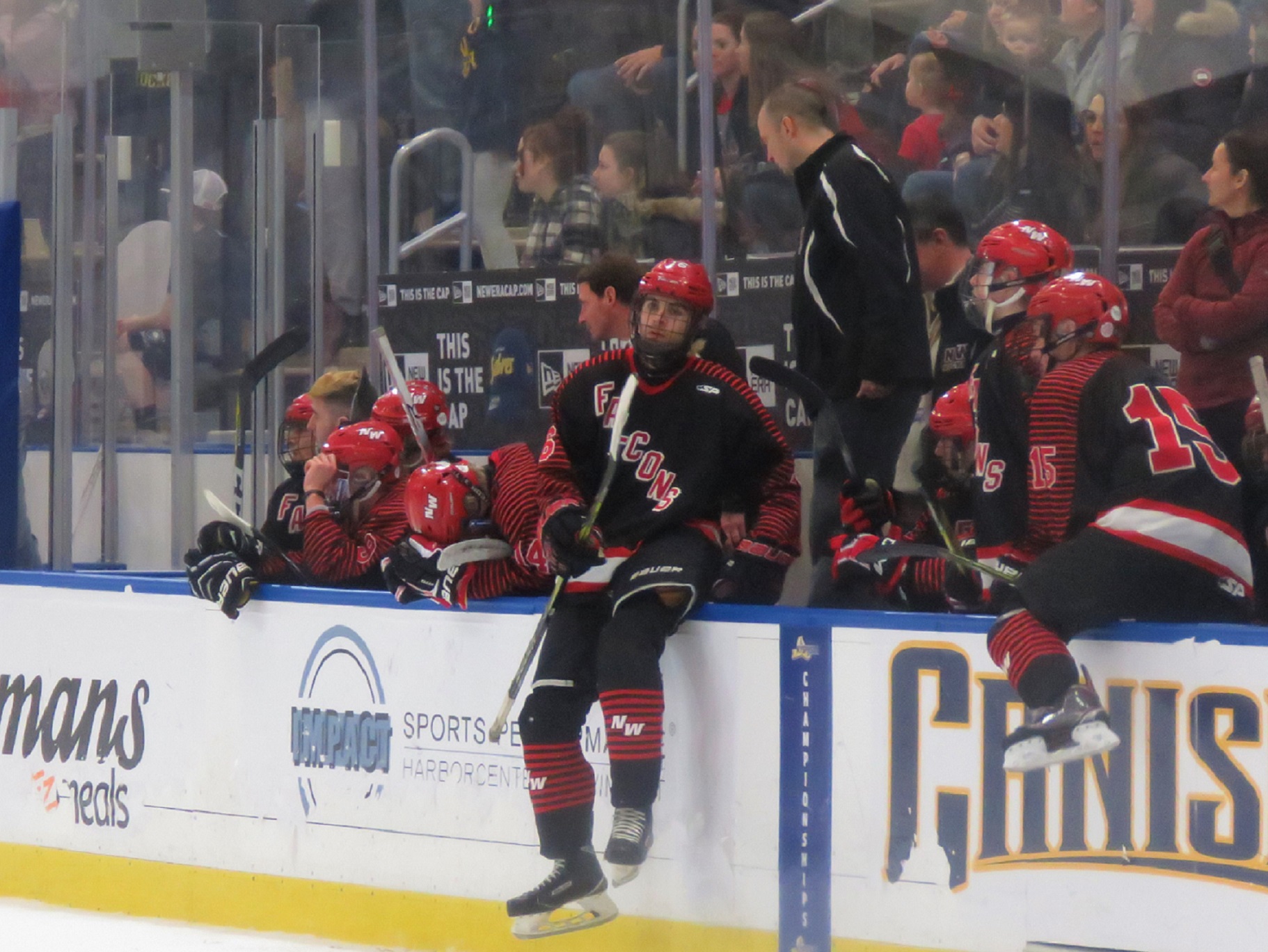 The Niagara-Wheatfield bench following the Falcons' loss versus Victor in the state finals. (Photo by David Yarger)

Sun, Mar 11th 2018 04:50 pm
No. 1 in NYS Victor upends Falcons quest for first state title
By David Yarger
Tribune Editor
The Niagara-Wheatfield Falcons hockey team has been through it all this season.
Coming off the previous season where they didn't make the sectional final; a middle of the season where they weren't playing their best hockey; a historic end of the season run; and the tragic loss of a classmate mixed into four months was just tidbits of what the Falcons went through.
After the tragedy in the community, the team uplifted many Wheatfield spirits with a run to the New York state large schools championship. Unfortunately, good things come to an end, and on Sunday evening, the Falcons were defeated by the No. 1 team in New York state, the Victor Blue Devils, 5-1.
The game was the first time that N-W had reached the state title.
The game started hopeful for the Falcons, as in the second period with no score Zack Belter ripped a slap shot that was tipped in by Chace Woods, sending the N-W faithful into a frenzy.
Less than three minutes later, though, Victor tied things up on a goal by Sam Lambert. Lambert finished the day with two goals.
Less than two minutes after the first Blue Devils goal, Victor took the lead on a wrist shot from Josh Albert that caromed over the glove of Falcons goalie Peyton Siegmann.
Victor wasn't finished, as Ashton Collazo added the third unanswered goal of the period, and the Falcons went into the second intermission trailing, 3-1.
In the third period, the Falcons came out fighting, but couldn't get anything past New York state Player of the Year and First Team All-State goaltender Chayse Ierlan.
Victor added two more goals in the third and as the time ticked down to zero, that was all she wrote on the Falcons' historic season.
After everything the team had been through, Falcons coach Rick Wrazin said he knew his team could get to the big game and regardless of the result he was proud.
"We knew they could come this far," Wrazin said. "These guys just bonded. These guys gave everything every time they were on the ice. They're just a team to be proud of. We knew they could do it, it's just a shame it ended this way."
Wrazin added he was happy with how the team didn't stop fighting in the third period and if the team could've scored one and put pressure on Victor, it could've been a different story.
The second period was a rare one for the Falcons, as they seen Victor score three goals rather quickly. In the playoffs, the Falcons only allowed one goal, but Wrazin said Victor made plays.
"We got beat on some plays we don't typically get beat on," Wrazin said. "I don't know if it was the pressure of the game or because they came out as hard as they did. ... I think we kind of held back, not that we didn't have the effort, but guys were reading instead of pressuring a little more than normal and our strength has been making teams make mistakes and we gave them a little too much time today."
Wrazin added, even though the team came out hard in the third, the three consecutive goals kind of sucked the wind out of the team and he compared it to when his team scored two quick goals yesterday but being on the other end of it.
One of the toughest parts for an Wrazin was knowing he'd be saying goodbye to a group of nine seniors.
"A lot of these kids I coached growing up; they played with my son. ... It's been a special group for me," Wrazin said.
Wrazin added emotionally, that he hopes the seniors take everything they learned at N-W and carry it into the real world.
The Falcons graduating seniors include Belter, Woods, Nick Peters, Peter Buffone, Chris Tobey, Michael Lotempio, Dom Pulli, Sam Messana and Nick Breier.
Following the game, Belter and Woods were honored for making First Team All-State. Siegmann was also nominated for Second Team All-State.
The Falcons finished the season with a record of 19-3-3-1 and also won their sixth Section VI title in program history. 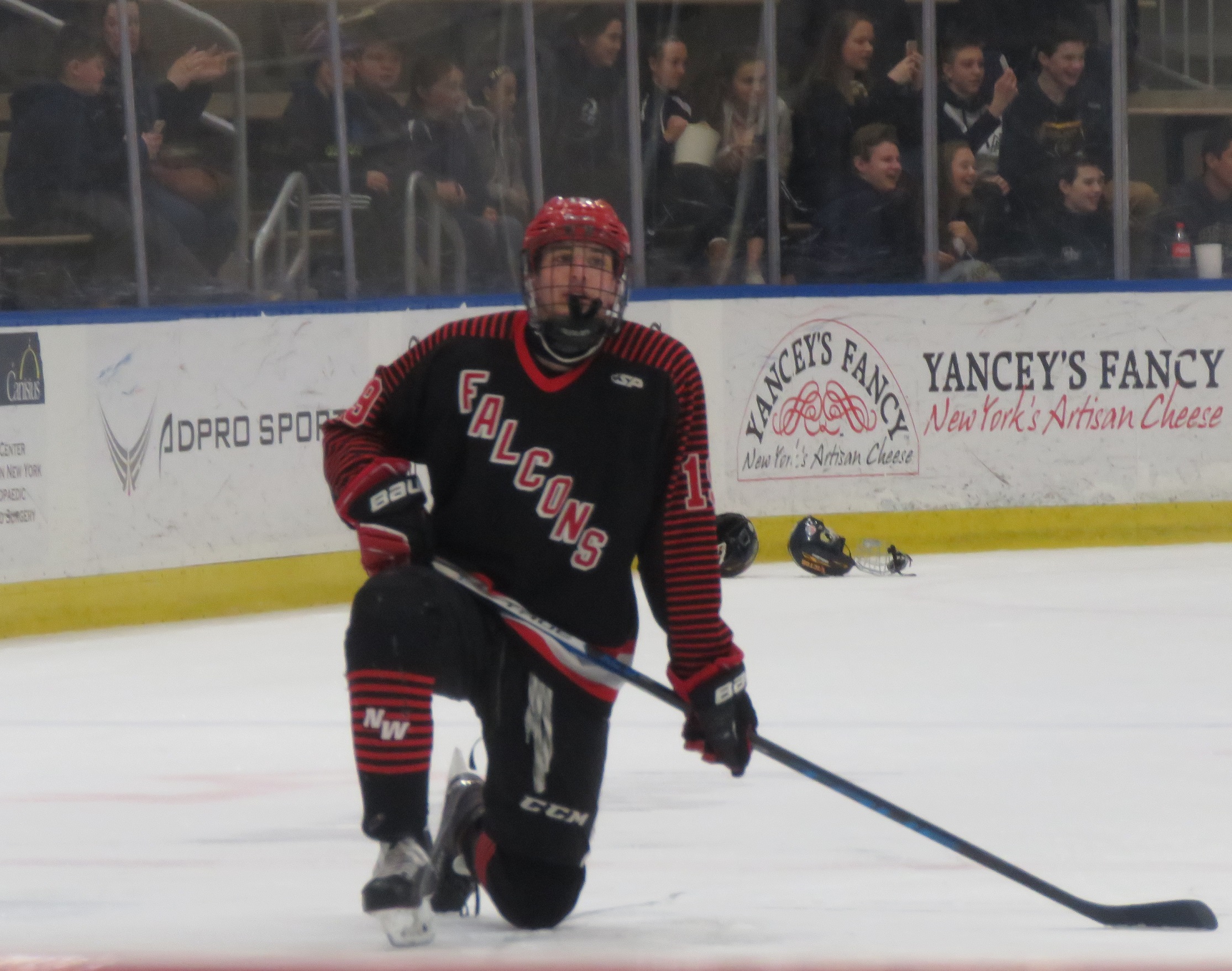 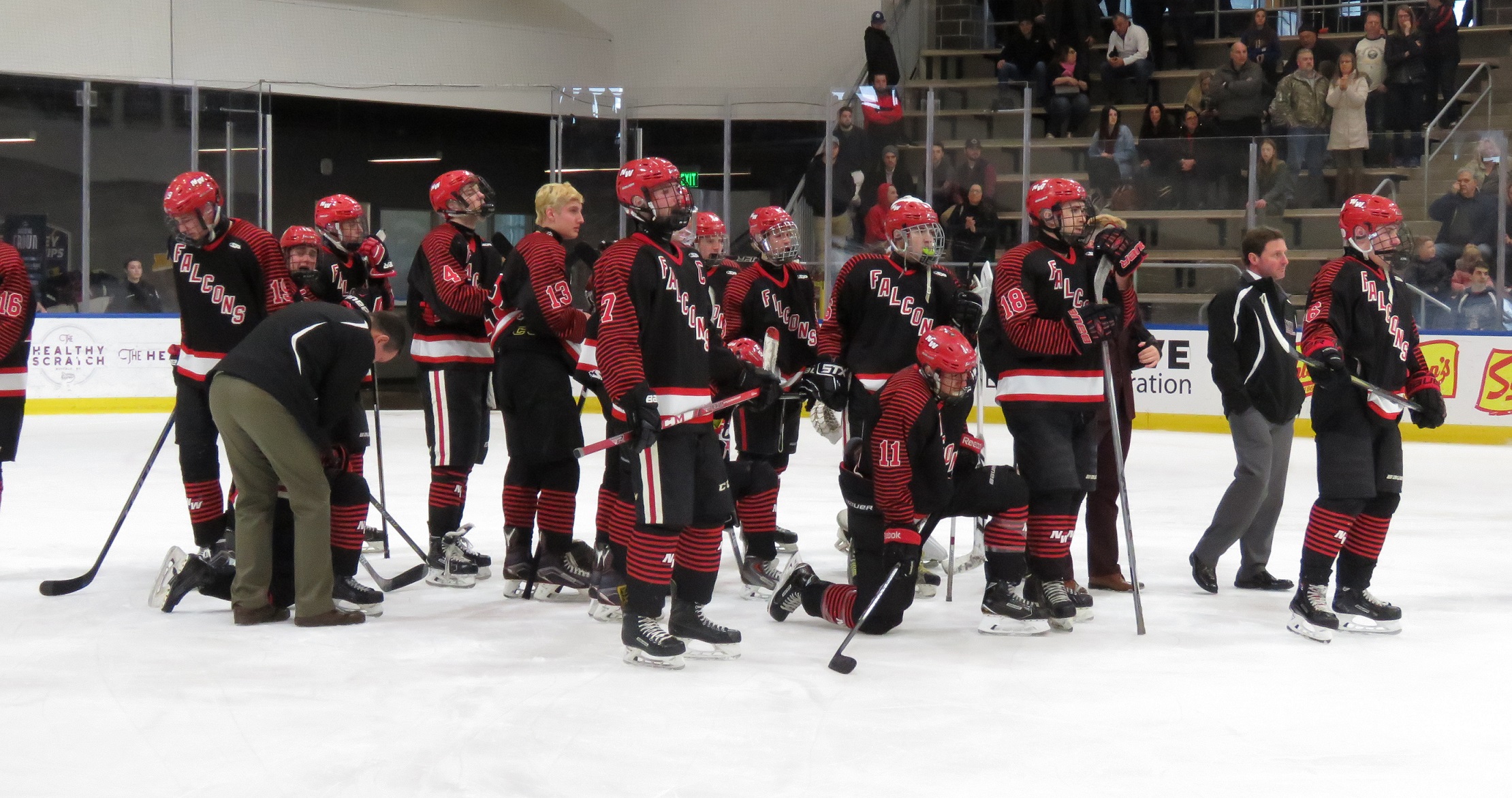 The Falcons remain on the ice following their defeat versus Victor. (Photo by David Yarger) 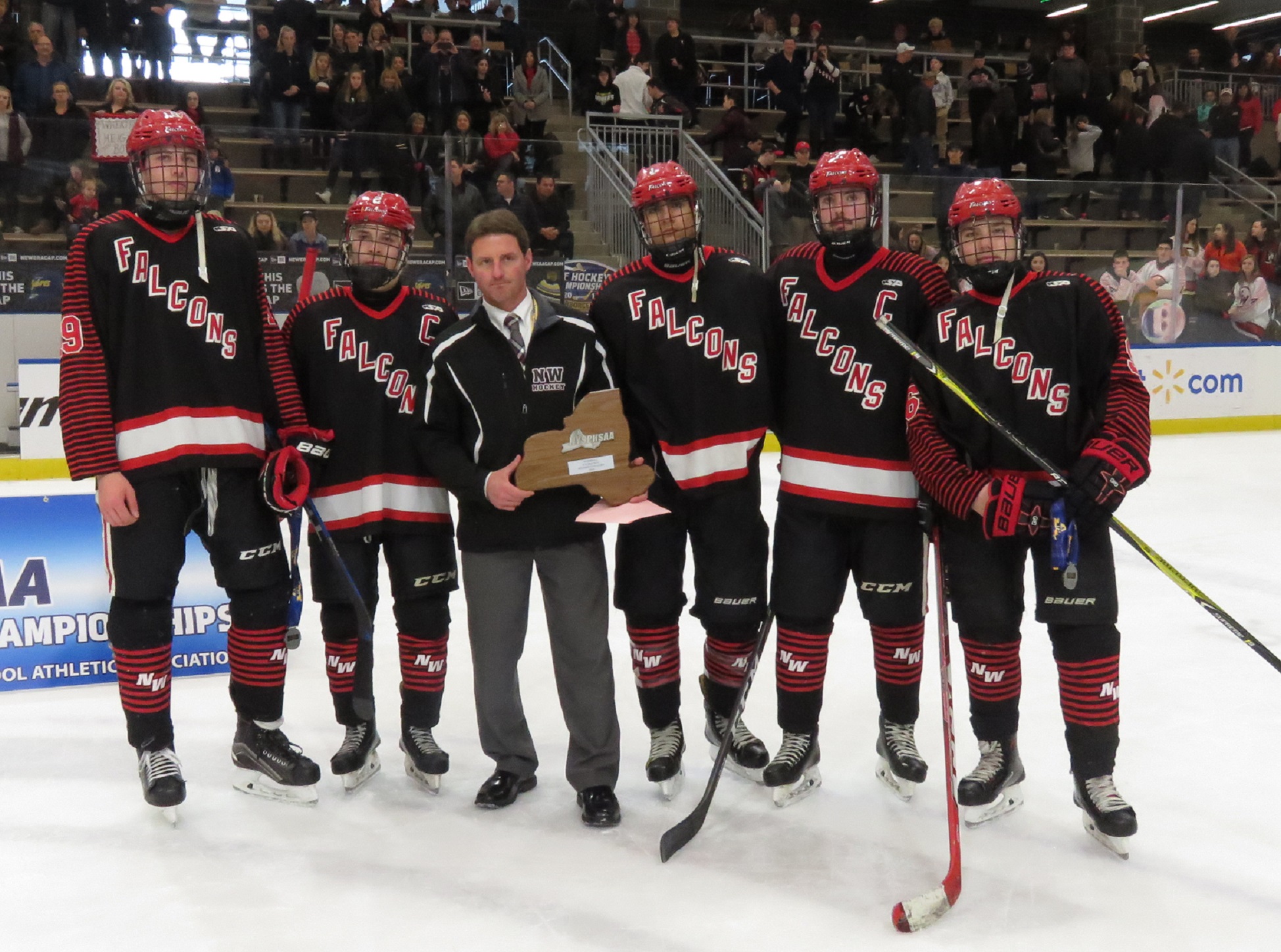