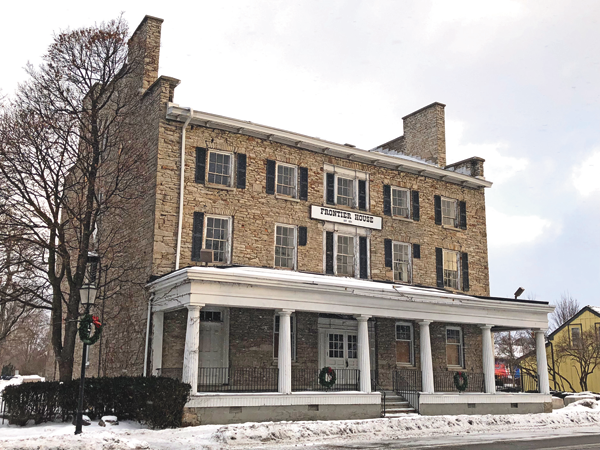 Sat, Mar 10th 2018 09:30 am
All options still on table; Alan Hastings resigns
By Joshua Maloni
Managing Editor
Wednesday night in Town of Lewiston Justice Court, the Hon. Thomas Sheeran told principal Frontier House owners Richard and Judy Hastings he wants to see "something that we can point to that gets us closer to the goal line" of exterior renovations and/or a sale. The judge gave the Hastings family 30 days in which to act.
The Village of Lewiston filed court papers against Richard and Judy Hastings as a way to ensure repairs are made to the nearly 200-year-old Frontier House's exterior.
Sheeran said he believes both parties have the same objective: a secure building that doesn't pose any safety hazards to the public.
Attorney Joseph Makowski, representing Richard and Judy Hastings, submitted a plea of "not guilty." He told Sheeran he was brought on to look at all options regarding the building and almost one acre of property. That includes building rehabilitation and the possibility of a sale - which he said was still "in the cards." Makowski said he needed "a little bit more time" to work with the Hastings family in finding "a plan that makes sense."
He also told Sheeran that Alan Hastings, Richard and Judy's son, was no longer Frontier House president. Hastings apparently resigned his position on Dec. 31.
Village of Lewiston Counselor Joseph Leone said the municipality is "very concerned" about the state of the building, and has provided "adequate leeway" for repairs. However, he agreed an additional 30 days would be reasonable.
Sheeran said he believes Richard Hastings has good intentions for the Frontier House, but he is expecting to see efforts leading to a favorable solution, whether that's repairing the building or finding a buyer who will commence necessary construction.
The town justice set a return court date of April 11.
Following the ruling, Makowski said, "Because of the nature of this proceeding, I decided it was necessary to bring in professional expertise on both the architectural side, because of the architectural significance of the building, and then, frankly, on the engineering side. And so, we've been in contact with a very prominent architectural and engineering firm, EI Team in Tonawanda, and they are going to be working with us to assist us in addressing this issue of the alleged code violations - how they get addressed - keeping in mind the historic nature of the building and, frankly, price point and timeline."
Makowski reiterated all options are on the table.
"We're not ruling anything in or out," he said. "We continue to look at the possibility of selling the building. We'll be looking at my client retaining the building and doing the necessary repairs to bring it into code compliance, while he continues to look at whether he wants to pursue a sale or work on a development of the building - either directly or through a third party."
Last November, Katerra Renovations (formerly Texas-based United Renovations) signed an intent to purchase the Frontier House (at a price of $800,000). Following a period of due diligence, the company made a counter offer of $450,000. That offer was rejected, and Katerra opted to not complete the purchase process.
Since then, "There is interest in the building from developers who see its potential within the village," Makowski said. "As you know, it's strategically located right in the middle of the village. And it's really a question of finding the right party at the right price. But I would say there is legitimate interest, on the part of reputable development firms, to perhaps purchase this building."
Makowski said he asked Richard Hastings to consider accepting less than $800,000, but implied his client would not agree to a price in the $450,000 neighborhood.
In 2016, Building Inspector Ken Candella determined the Frontier House had more than a dozen municipal code violations. He confirmed this was still the case in the fall and winter of 2017.
The Village of Lewiston Historic Preservation Commission requested the Hastings family take action by the fall of 2017. Following the municipality's determination that insufficient repair work was rendered, Zoning Officer Edward DeVantier sought a court remedy.
The Frontier House is owned by Hastings Lewiston Inc.
Categories
Business Feature Home feature NFP Sentinel Sentinel feature Sentinel HP Feature List