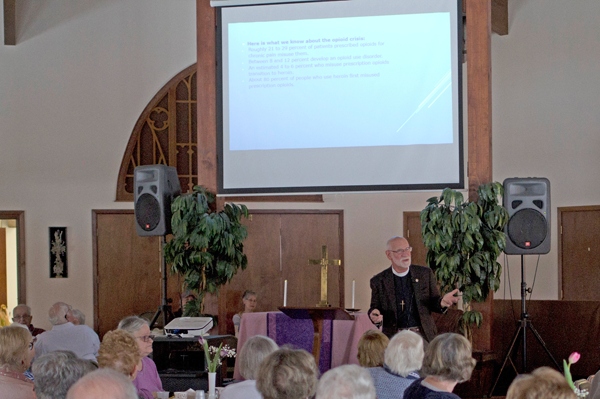 Sat, Mar 10th 2018 07:00 am
By Larry Austin
Island Dispatch Editor
Citing statistics that show the number of deaths in Erie County from opioid abuse has tripled in the last four years, the Rev. Earle King of St. Martin-in-the-Fields
During a Lenten Luncheon discussion at Trinity United Methodist Church March 7, titled "Justice and the Opioid Crisis," King said the opioid overdoses are responsible for 115 deaths a day in the U.S.
The introduction of fentanyl, which is "enormously more power than heroin and morphine," King said, has fueled the rise in overdoses.
King told the luncheon crowd of "enormous amounts of death that have come as a result of fentanyl" being mixed with heroin on the streets.
The opioid abuse has "substantial differences" from alcohol abuse, King said, because whereas alcoholics will hit bottom, opioid addicts die before hitting bottom.
"It's a different sort of disease," King said.
During his discussion, King raised such topics as the moral behavior of pharmaceutical companies, the attitude of Christians when considering whether addiction is a moral lapse or an illness, and what is the Christian perspective on pain.
•The Grand Island Ministerium will hold Lenten Luncheons at Trinity United Methodist Church, 2100 Whitehaven Road. Lunch begins each week at noon, with a different church on Grand Island providing the meal. Then, at 12:30 p.m., there is a half-hour presentation. This year, the theme is "Justice for All God's People." The cost of the meal is $5 per person. Everyone is welcome. For more information, call Trinity United Methodist Church at 716-773-3322.
Categories
Dispatch Dispatch feature