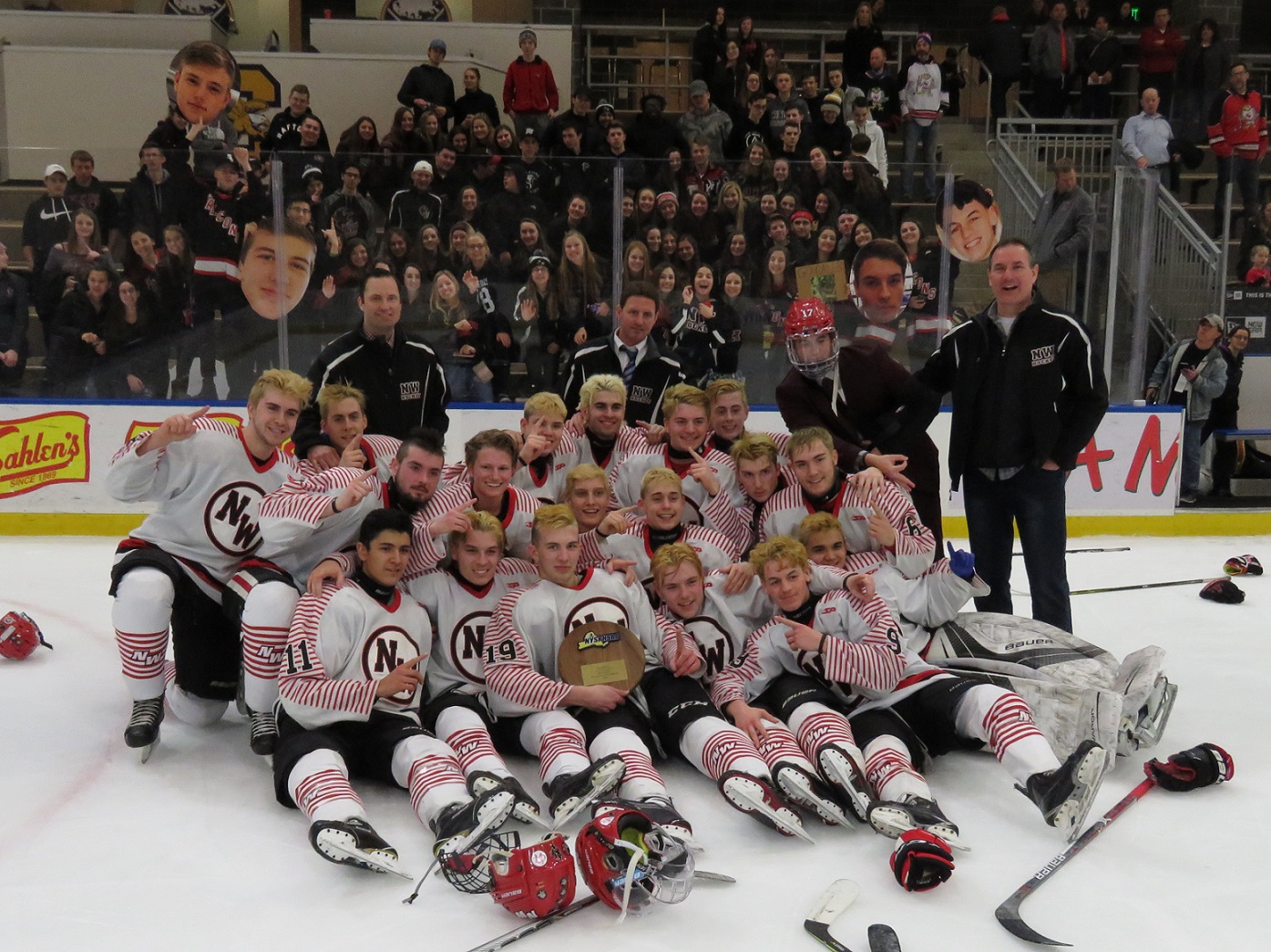 The Niagara-Wheatfield Falcons hockey team celebrates with their regional plaque after defeating the Syracuse Cougars, 3-1. (Photo by David Yarger)

Sat, Mar 3rd 2018 11:45 pm
Senior captain's two goals push Falcons past Syracuse
By David Yarger
Tribune Editor
On Monday when the Niagara-Wheatfield hockey team defeated Williamsville North for the Section VI large schools crown, Nick Peters played a rare game where he didn't record a point. Saturday night in the state quarterfinals, Peters was in on every scoring play.
The Falcons defeated the Syracuse Cougars, 3-1, to move on to the state semifinals.
The two team's fans filled the rink, majority of the fans being from N-W, but Syracuse traveled well.
In the first period, Syracuse put a little pressure on goalie Peyton Siegmann, but the Falcons eventually began to pepper shots on net.
Later in the period, Nick Breier stormed to the net with the puck and his shot went off the Cougars goalie and onto the stick of Peters. Peters wasted no time and lifted it into the net to give the Falcons a 1-0 lead.
On the goal, Peters said, "It's always exciting in that atmosphere. Honestly, I'm just happy our team came out with the W, because at the end of the night that's all I care about at this point."
In the second period, the Cougars got to Siegmann a few more times, missing on a three-on-one once and then finally Hugh White got one past Siegmann to tie it up, 1-1.
The goal was the first Siegmann had given up all playoffs.
Syracuse almost had another positive bounce in their direction, as a shot went off Siegmann and hit the top of the net, missing by inches.
Midway through the period, Zack Belter laid a big hit on a Syracuse forward, which sparked a light confrontation.
The hit seemed to spark the Falcons though, as shortly after, Chace Woods took the puck into the Cougars zone, lost control, but Peters was there to deliver a shot, which lit the lamp once again, giving the lead back to the Falcons, 2-1.
The Falcons didn't waste any time, as 24 seconds after Peters' goal, Peters dished a pass to Michael Lotempio on a two-on-one, which Lotempio netted to send the N-W Black Hole cheering section into a frenzy.
After giving up a goal, Peters said it was a great sign to see the team respond the way they did.
"At this point in the season every team is strong. There's going to be ups and downs, you're not going to be running over anybody, so it was who was gonna respond next? It's good to know we can respond in those kind of situations," Peters said.
In the third period, the Falcons were able to kill a five-on-three powerplay, limiting the Cougars to minimal opportunities.
Once again, Siegmann came to the rescue, as he made a few more saves to keep the Falcons in control down the stretch.
Things got chippy late, but as time ran out, the Falcons stormed the ice to celebrate and they held on to win, 3-1.
Coach Rick Wrazin said the first goal by Peters was a tone setter for the entire team.
"It definitely set the tone. Going into a game against a team that's relatively unknown to you is a difficult thing, and I think getting that goal was big in terms of getting our confidence up and getting us believing that if we play the right way things are going to work out," Wrazin said.
When the Falcons played Williamsville North Monday in the Section VI finals, the team knew what to expect, as they had played their rival two other times. Saturday night, the Falcons didn't know what to expect from the unfamiliar Syracuse Cougars. Peters and Wrazin said not knowing much about the Cougars got the team to play free and easy, rather than uptight.
"I found that we were a little more loose," Peters said. "When we play North, we'll be in the playoffs and we kind of know what's going to happen ... and this game you just kind of go out there, play your game and hope for the best."
Wrazin said, "I think they manage to stay loose under most circumstances. North is such a rivalry that they probably do get a little more intense with them. ... Coming into this game, as a coach, you worry about, 'are they taking it seriously?' or 'are they too loose?' They were loose, but they were focused, so they were in a good place."
During the season, there were certain times where N-W came out of intermissions and looked sluggish. Wrazin's message going into the third period was right to the point.
"We knew the caliber of team we were playing ... so, we told them 'they're not going to roll over for anybody. They're going to come out hard and we need to come out harder.' I think our boys were ready for it. ... We gave up six shots in the third and three of them weren't until they pulled the goalie and had some penalties. It was a third period played the way you wanted it to," Wrazin said.
The Falcons' next opponent is North Rockland, the Section I champs, who defeated Monroe-Woodbury in the regionals.
The state semifinals matchup is slated to start at 9:30 a.m. next Saturday back at the HarborCenter. 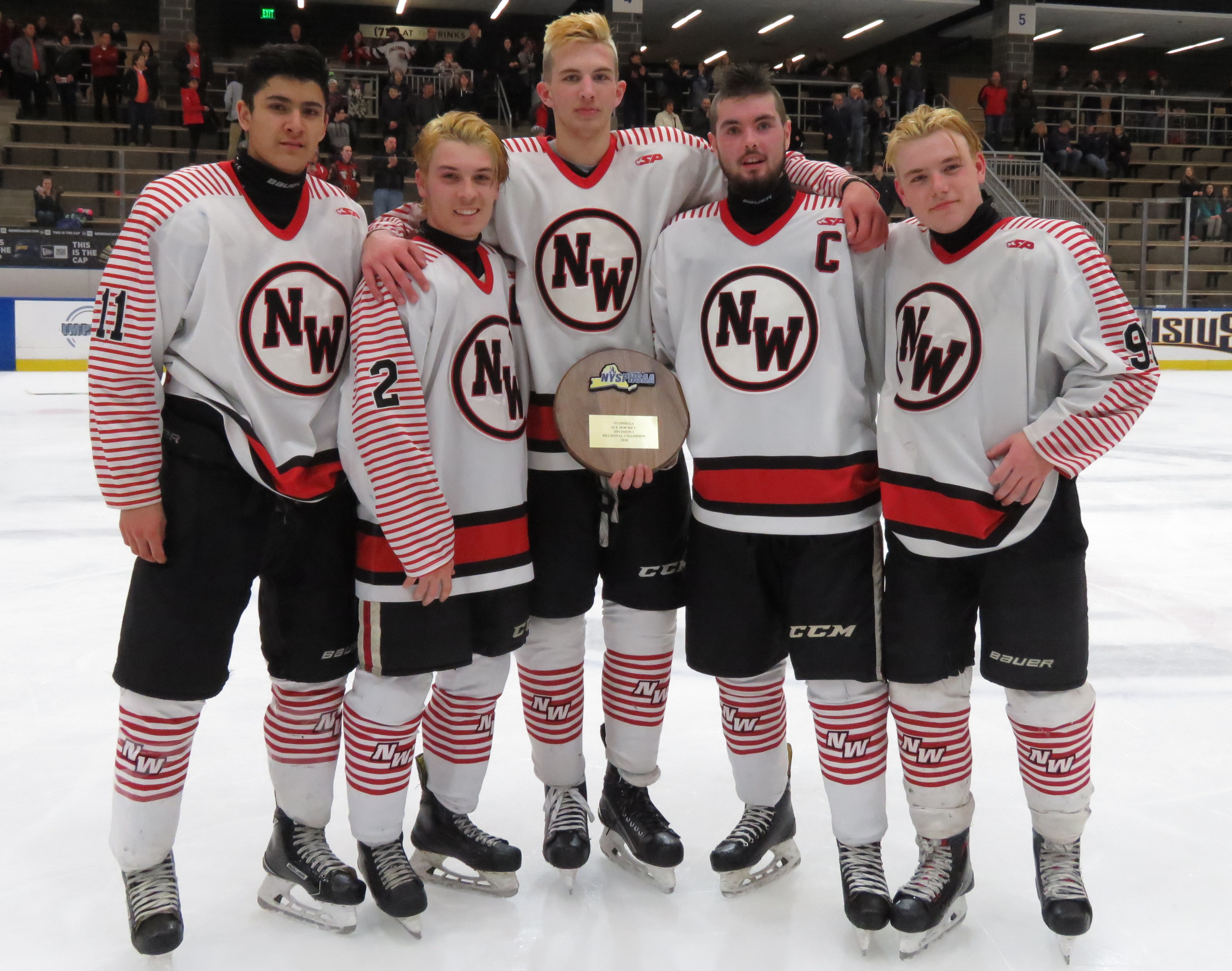 The N-W Black Hole was back and better than ever Saturday night. The cheering section posed for a picture following the Falcons win in the state quarterfinals. (Photo by David Yarger)
Categories
School feature Sports feature Tribune