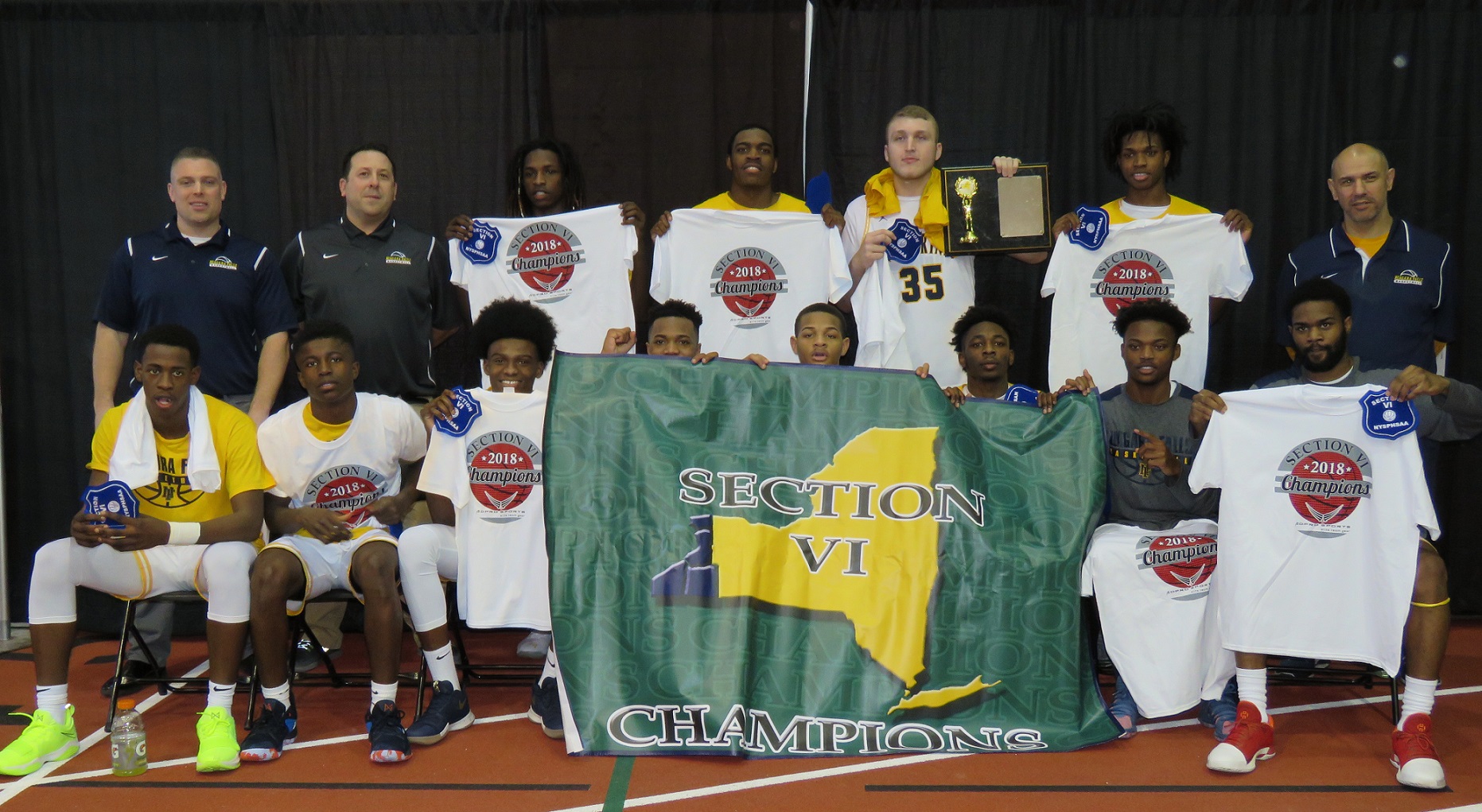 The Niagara Falls Wolverines pose for a picture after clinching their third straight Section VI title. (Photo by David Yarger)

Sat, Mar 3rd 2018 07:20 pm
Wolverines use pressure defense to wear down Williamsville North
By David Yarger
Tribune Editor
There are few schools who have a storied basketball program like the Niagara Falls Wolverines. On Saturday afternoon, the Wolverines added to that history, defeating the Williamsville North Spartans, 61-42, to win their third consecutive Section VI Class AA title.
The Wolverines used a team effort in the victory, as nine different players scored. Along with the offense, the Falls used a high-pressure defense that gave the Spartans fits all game.
In Niagara Falls' last game, they relied on scoring production from their underclassmen, Roddy Gayle and Willie Lightfoot. Versus Williamsville North, the four seniors - Quran Dubois, Marquise Miller, Syquan Ralands and Tazaun Rose - combined for 32 of the team's 61.
Coach Sal Constantino said he sat down with his seniors and told them to just let the game come to them Saturday.
In the first quarter, the Spartans had a 2-0 and 4-3 lead, but that would be the only leads they held all afternoon.
Dubois started the scoring for Niagara Falls with a 3-pointer and then a fast break layup after a block by Moran Montgomery. Josiah Harris also nailed a trey in the quarter and the Wolverines led after one quarter, 15-9.
The Spartans cut the Wolverines lead to four in the second quarter, but after a timeout, Constantino added additional defensive pressure and the Wolverines began to extend their lead.
The Falls ended the half with an 11-3 run, highlighted by a Rose 3-pointer. They led at halftime, 30-18.
In the third quarter, the Wolverines continued to dominate, as Ralands and Gayle scored 6 points each, helping extend the lead to 46-29 after three.
Dubois started the fourth quarter with another trey and the Wolverines continued to dominate offensively and defensively. As the clock read all zeros, the Wolverines celebrated their fourth title under Constantino's reign.
Constantino said it hadn't hit him that it was his fourth title, but he was proud his team achieved a goal they set early in the year. He added that the team wasn't satisfied and they're hungry for more.
"I'm trying to convince the kids how they should be proud of this moment ... unfortunately, with expectations at our place, it's a belief and it should never be that. ... Nobody else had a drop of sweat but us, all year long, so this win is for us. I'm proud of those guys," Constantino said.
Miller, who's been an undersized post man for the Wolverines, played a big role in the Wolverines' win. Miller was constantly on the offensive boards and getting second chance opportunities for the Falls, which Constantino was pleased with.
"We thought with his athleticism and aggressiveness he could be so successful, especially at the high school level around the basket and he bought in," he said.
Constantino added that seniors like Miller and Rose have bought into new roles this season and they're a big part of why the team is where it's at.
For the Wolverines, Ralands and Gayle led the way with 12 points, while Dubois and Montgomery added 9 and 8 points, respectively. Rose also netter 7 points for the Wolverines. The win was the 20th title in Niagara Falls history, including the 12 since the new school opened in 2000 and the eight prior.
Next up for the Wolverines, they'll face the winner of the Section V Class AA title game between McQuaid and UPrep.
The Wolverines have experience versus both teams this season, as they lost their first game of the year versus UPrep, 78-74 in overtime, and then followed that by beating McQuaid, 76-60 in the Cataract Classic.
Constantino said, "We beat McQuaid kind of good at our place, so if they win we want to guard against us being overconfident. Then, we had an overtime loss at UPrep, so I think the guys might be a little hungry for that one."
The Wolverines will be back at Buffalo State at 8:30 p.m. next Saturday to face the winner of the Section V title.