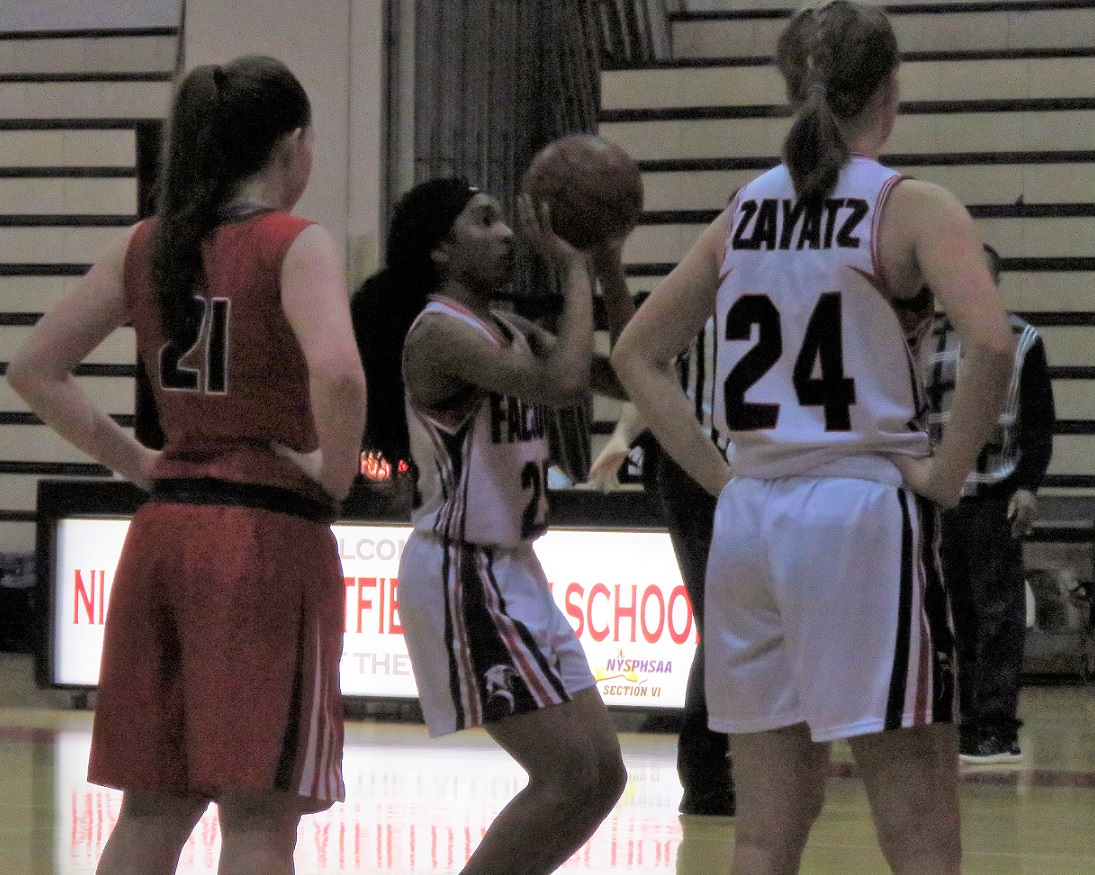 Tue, Feb 27th 2018 10:40 pm
N-W offense goes cold in sectional quarterfinals
By David Yarger
Tribune Editor
Of all times for the Niagara-Wheatfield Falcons offense to get cold, the last place coach Gary Jackson wanted it to be was in the Section VI playoffs. Unfortunately, for the Falcons, points were hard to come by and they were defeated by the Jamestown Red Raiders, 48-39.
The game was far from an offensive display, as both teams struggled offensively and scored in runs. Nevertheless, Jamestown was the last team to go on a run.
The first basket wasn't made until 2:48 into the game, as Jamestown's Katelyn Bennett drilled the first of her seven 3-pointers. Bennett was the standout offensive player, as her game high 26 points carried the Red Raiders to victory.
The Falcons didn't get on the board until there was 3:40 left in the first quarter. The play was an and-one made by Brianna Zayatz. The result of the free throw was a theme at the line all night for the Falcons: a miss. N-W ended up missing 15 free throws, which would be pivotal down the stretch.
Zayatz scored the 5 of the Falcons 7 points in the quarter and the team trailed after one quarter, 10-7.
In the second quarter, the Falcons offensive struggles continued, as their first bucket of the quarter came with 3:29 left.
After a Bennett trey, though, the Falcons closed out the half strongly with a 7-2 run. They trailed at the break, 17-16.
In the third quarter, Taylor Benton came out hot, drilling a 3-pointer and a couple possessions later drilling a jump shot to give the Falcons a 23-17 lead.
Up 26-20, the Falcons couldn't extend the lead any further, as the Red Raiders went on 9-2 run to close the quarter, highlighted by another Bennett 3-pointer to give Jamestown a 29-26 lead.
Down 29-28 heading into the fourth quarter, the Falcons turned to their post presence, LeGary Jackson. Jackson struggled up until the fourth quarter, but in the quarter she scored 9 of her 12 points.
Jackson scored the first 7 points of the quarter to give the Falcons a 35-34 lead.
Although she struggled in the early going, coach Jackson said it was the team that kept faith in her.
"It's not just what I had in her, it's the whole team," he said. "They kept getting her the ball, they kept feeding her inside and we have a concept of 'if the well still has water, let's keep drinking it.' They got into it and they kept feeding her and they did a good job of getting her in the right spots."
The Falcons held a 36-34 lead midway through the fourth quarter, but that was the last lead they'd hold.
Bennett came down and got open on back-to-back possessions and drilled two 3-pointers, giving Jamestown a 40-36 lead they wouldn't let go of.
The lead got up to 10 points and the Falcons couldn't muster any offense late, eventually falling, 48-39, in the quarterfinals of the Section VI Class AA playoffs.
Losing a playoff game was tough for coach Jackson, but, by far, wasn't the most difficult part of the evening.
Following the game, he brought over his six seniors — Benton, Kelsey Lachowski, Emma Carrier, Callista Zayatz, Sydney Crangle and Abigail Kroening — and praised the work they'd done for the team.
"I rehearsed this moment last night. I told them I cried for an hour and 42 minutes, because this group right here ... the first year I coached I said I'd never have a better group of seniors ... but this group right here is the hardest group for me to walk away from; it's hard to see them walk away. This is, by far, the greatest group of seniors I've ever had. They didn't get caught up in being seniors, they got caught up in the team doing their best, so tonight is hard for me," he said.
Following the 9-0 run by Jamestown to give the Raiders a 43-36 lead, coach Jackson said nothing changed, the game just got away.
"They didn't really do anything to adjust, we just kind of let things slip away. We let some bad calls get in our head and we just didn't keep our poise," he said.
The Falcons will have seven players returning next year, but coach Jackson was in no mood to talk about the future and was upset to see his group of seniors walk away.
"It's hard to think about because of these seniors," he said. "I'm glad these seniors matured the younger girls and started working with them, but I can't even look at that right now. I'm still thinking about these seniors."
Coach Jackson added he thought the team's season could've went further, but he said, "I wouldn't change a thing with this group right here."
Along with Jackson's team high 12 points, Brianna Zayatz had 11 and Benton added 10.
The Falcons finished with a 11-7 record.
Categories
School Sports Tribune