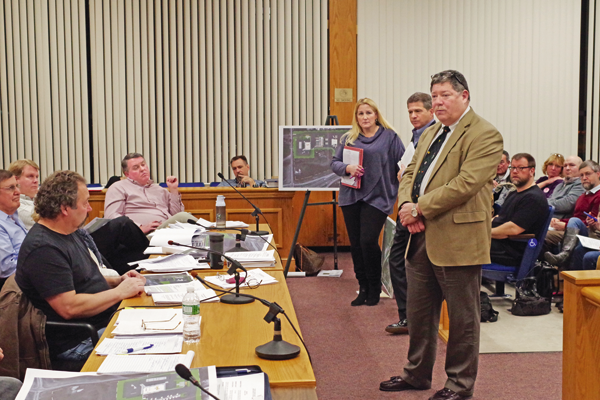 Rick Shuffield, vice president of real estate and development for Love's Travel Stops and Country Stores, speaks before the Grand Island Planning Board Monday night at Town Hall. Love's is developing a plan to build a truck stop on Whitehaven Road. (Photo by Larry Austin)

by jmaloni
Fri, Feb 16th 2018 06:50 pm
By Larry Austin
Island Dispatch Editor
On the heels of the first public presentation regarding development by an Oklahoma company of a multi-million dollar truck stop on Whitehaven Road, Town Supervisor Nathan McMurray said he will propose a new law Friday that will ban "travel plazas" on Grand Island.
The proposed law would create a definition of "travel plazas" as distinct from motor vehicle service stations and then disallow them outright in the Town of Grand Island. (See McMurray's opinion on Page 4 of today's Dispatch.)
McMurray's proposal follows a meeting Monday by the Grand Island Planning Board during which representatives of Love's Travel Stops and Country Homes presented a concept plan for a truck stop on Whitehaven Road west of the I-190.
Residents filled the Town Hall courtroom to listen to Rick Shuffield, vice president of real estate and development for Love's Travel Stops and Country Stores; Dave Everett, counsel for Love's; and Kristin Savard of Advanced Design Group make a first presentation to the Planning Board.
Opposition
Planning Board Chairman Dave Bruno reminded the audience with regret that the meeting was informal and not a public hearing, so public comments would not be heard.
Though the public was not allowed to speak as part of the informal process, many in the Town Hall courtroom expressed their opposition, with signs or buttons.
In an email to media, Dave Reilly of Citizen Coalition for Wildlife and Environment said residents "are mobilizing in opposition to the proposed Love's Truck Stop on Grand Island."
"The truck stop would destroy 21 acres of green space consisting of trees and shrubs; create hazardous environmental pollutants that would affect air, soil, water, animal, plant and human health; would introduce light and noise pollution that would impact wildlife and quality of life; would increase traffic and vehicular hazards; and would dramatically alter the character and natural environment of Grand Island," Reilly wrote.
"Because we live on an island, the ecosystem is fragile and changes to it affect the land, water, air, birds, and other wildlife who live on the Island and around us. A major hazardous spill on Grand Island would not only affect our community, but the towns, waterways, and people all around us and downstream."
Noting that Grand Island is in the midst of a master plan process, Reilly wrote that a truck stop "is inconsistent with our goals, our plans, our health and wellness, and our responsibility to protect and enhance our environment for future generations!"
Shuffield acknowledged the opposition to Love's from some members of the community.
"There's some rumors that are floating around out there that we're going to be building on a super-environmentally sensitive area," Shuffield said. "That's not necessarily the case."
"There's a lot of industrial there," he said of the proposed site, "and when you really look at our impact, as I said before, our traffic is going to get off, visit with us and get right back on."
Shuffield said the economic impact of Love's will be over $1 million annually in sales tax revenue. Truck stops are a fact of life, he added.
"Truckers, they have to stop. If you want our roads safe, they have to have a place that they can pull off, rest, eat."
Shuffield said after the meeting that he understand the sentiment of Not In My Back Yard.
"I get that," he said. "I don't get it from this perspective. It's an allowed use by zoning. That's an industrial area. To me it makes a lot of sense." 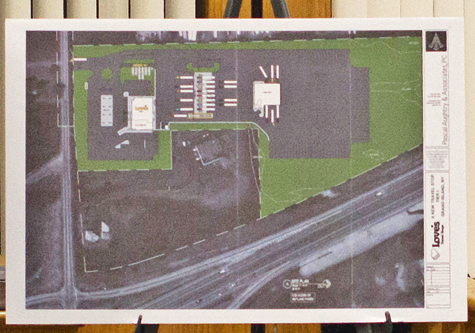 Love's displayed a diagram of a concept plan for a truck stop off Whitehaven Road west of the I-190.
Welcome Center
McMurray reiterated last week in the Dispatch that any connection to Love's and the state welcome center now under construction between Alvin Road and the I-190 are false.
"Rumors are being spread that the truck stop plans to tie into the Welcome Center's sewer. These allegations are false: New York State does not plan to collaborate with the truck stop on sewer," McMurray wrote. "In fact, the Welcome Center is putting in their own septic system, because the town has no plans to extend existing sewer facilities west of the I-190 on Whitehaven. It would be impossible to tie into a system that does not exist."
Shuffield said the genesis of the Love's project preceded the welcome center project.
"We've actually been working on this project for probably two-and-a-half years, on again, off again," Shuffield said. "We'd run into obstacles, we'd resolve them, so we kicked it back up. And I think we have been actually in pretty stringent speed since about August of last year."
"But, you know, with the environmental processes, there's just a lot of studies and a lot of information that has to be gathered to make sure that it's viable."
Shuffield did say that the welcome center and Love's have what he called synergies.
"We think we complement the welcome center. Their intent is to draw cars and some trucks, anyway," Shuffield said, noting the welcome center has plans for 14 truck parking spots. "So that's their intent is to get people to stop here. Well, I think we help that scenario."
Shuffield said that in Canaan, New York, Love's put in its own welcome center at the request of the host municipality to draw more attention to the county.
"We think there's some synergies and we certainly would be happy to talk with the state," Shuffield said. "Say that lift station costs $500,000 to put together, infrastructure costs that they need in order to take care of the sewer. Synergistically, we would share that cost with them. So we might say 'We'll pay half of it or we'll pay whatever portion of it,' so that the state wouldn't have to spend as much money and they would get the benefit on that end and then we would get the benefit from the same thing."
McMurray, who is seeking a candidacy for Congress, chided Love's on his McMurray for Congress social media, saying, "The Welcome Center has nothing to do with Love's. They never met. What Love's (and others) are doing is trying to hide behind a positive project and activity. It's a standard corporate trick."
Everett presented detailed information to Planning Board members.
"We submitted a packet to you folks asking for a concept review," he said, pointing out that the purpose of the meeting was to "get preliminary feedback" from the Planning Board. He presented a project site map, a concept plan and analysis of the town's potential economic impacts. Everett said the project would provide $1.3 million to $1.5 million in sale tax and property tax revenue to the town annually, and $2 million in sales tax. The project would include gas pumps, a quick-serve restaurant with drive-thru, convenience store, light auto mechanical area, and amenities such as showers for truckers.
Everett said the project would create 40 to 65 full-time jobs and said Love's has "really a great reputation for being great community neighbor" that donates to community organizations.
He presented possible designs of "conceptual architecture" of what the truck stop could look like, but the company was flexible on that issue. A Grand Island Love's would be the fourth such travel stop area for the company in New York state. Love's has businesses in Canaan, Binghamton and one approved recently in Bath.
Love's has 450 locations in 41 states, Shuffield said, and is a privately held company doing business since 1964.
McMurray said Tuesday that some forms of commerce can be dangerous if placed in the wrong location. "The industrial disasters and toxic waste sites scattered throughout Western New York prove that we need to be careful," he said. 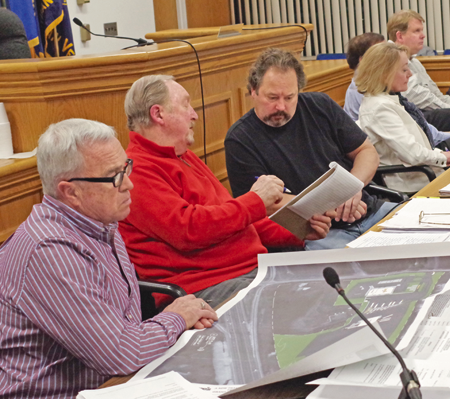