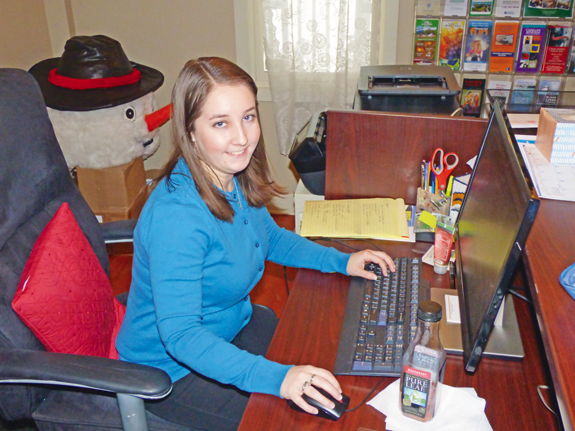 by jmaloni
Sat, Feb 3rd 2018 07:00 am
By Joshua Maloni
Managing Editor
Niagara River Region Chamber of Commerce President Jennifer Pauly has announced a new addition to her staff. Caitlin Fager started on Monday as the event and membership manager. She replaces Christina Crane, who took another position in late 2017.
"Once we looked through her resume, we realized she had the experience we were looking for: from logistics with events to nonprofit experience, as well," Pauly said. "And she knew people here, as well, in the Village (of Lewiston), from her previous job."
Plus, "We found out her favorite festival is the Smelt Festival," Pauly said. "So I said, 'You're hired!' "
A bass fisher, Fager has a fish business card holder on her desk.
"That just kind of gave us the type of personality that she had," Pauly said. "And, after all the interviewees were interviewed, we met as a committee and we definitely knew Caitlin was the right choice."
Fager recently served as constituent events manager for the Alzheimer's Association of Western New York.
She said, "I really love the Village of Lewiston. I've fallen in love with it, just being up here and working. I've done a couple of events at Artpark. I used to be the liaison for this county at my last job. I just really like it, and really want to bring people to the village. I want them to see how much I love it, and share that with them." 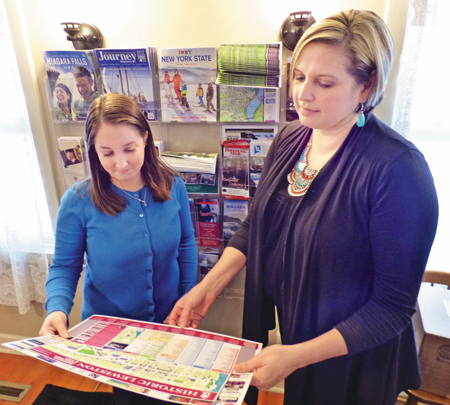 Jennifer Pauly and Caitlin Fager look over some business and event listings inside the Chamber of Commerce office on Center and South Ninth streets in Lewiston. Fager is the new Niagara River Region Chamber of Commerce event and membership manager.
Fager is originally from Rochester. She beat out a massive pool of applicants to land the chamber job.
"We started the interview process in December," Pauly said. "Our previous employee, Christina, went on to another job in October. So, we planned enough with our board to form a committee and go through over 80 resumes to choose those that we would interview. Caitlin was one of the interviewees. We had a nice committee of board members and staff to interview."
The Chamber of Commerce plans, organizes and produces the Smelt Festival (May) and Harvest Festival (September), while working alongside the Historic Lewiston Jazz Festival committee to market and provide volunteers for the Northwest Jazz Festival (August). The chamber also coordinates a series of business blenders throughout the year. Its annual awards gala will take place in April, and pay tribute to local business, tourism and government leaders, as well as standout citizens.
Categories
Business Feature NFP Sentinel Sentinel feature Sentinel HP Feature List Top Around WNY Feature