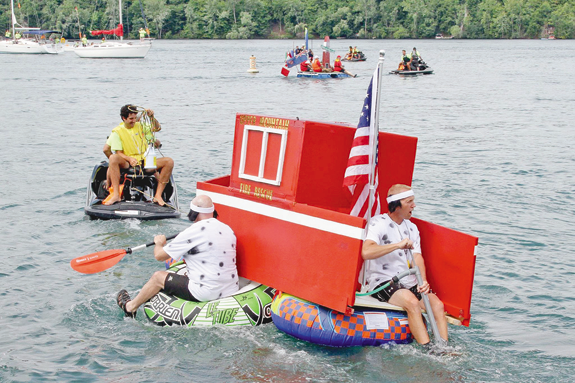 Participants enter the river at the Lewiston docks for the 2016 Great Contraption Race. IHTAF officials announced the race will take place in June on the Buffalo River as part of an overall move to Buffalo. (File photo by Glenn Clark)

It Happened to Alexa Foundation announces relocation to Buffalo

Sat, Feb 3rd 2018 07:00 am
Move eyed to provide IHTAF greater exposure
By Terry Duffy
Editor-in-Chief
As new restaurants open and development awaits at Center and North Eighth streets, word comes that a long-time face has opted to relocate out of the Village of Lewiston.
The It Happened to Alexa Foundation, a 15-year fixture on Center Street, recently announced it would relocate from its Lewiston offices to a larger operation in the Larkin Building on Exchange Street, just east of downtown Buffalo.
"It's in progress," said Dr. Kate J. Fowler, IHTAF executive director. She added she expects the move around April 1, with an announcement for a community open house in coming weeks.
Fowler said IHTAF sees this move to Buffalo as one that will provide greater overall exposure, community assistance and benefit to the foundation's purpose as a whole.
Founded in 1999 by Lewiston residents Tom and Stacy Branchini following a vicious attack on their daughter, Alexa, the foundation has, for years, provided outreach and services to victims of rape and sexual assault in 43 states in the U.S. and in 18 countries worldwide. IHTAF works to "empower survivors of rape and sexual assault and to facilitate the prosecution of their offenders by providing financial, emotional, and advocacy assistance to the survivors and/or supporter at the time of trial," (IHTAF mission statement).
"We look at this as a time to grow," Fowler said of the pending relocation from Lewiston to Larkin.
Pointing to the vast availability of governmental contacts and similar agencies in the Buffalo area serving victims in need, she added, "We really needed to be where the people are, to work with the contacts, with others more in the area."
"It's a way for us to expand, to grow, to provide more for others. We're excited about it," she added.
Fowler said the move, once complete, will enable the foundation to work more in developing new programs to greater serve the community. She noted, for example, a new association now in the works with IHTAF and Erie County Medical Center in Buffalo that will be geared to provide greater assistance for rape and sexual assault victims in need from both Erie and Niagara counties.
"Look for more on this (and other new services) to come," Fowler said.
She noted the Alexa Foundation's Great Contraption Race will relocate from the Lewiston docks to the Buffalo River, just east of Canalside in downtown Buffalo. The annual event is a popular on-water fundraiser that features participants and creative watercraft. Fowler said the race is slated to be held Sunday, June 10, from a launch area at the Buffalo Riverworks waterfront complex on Ganson Street. The race will be staged on the Buffalo River toward Lake Erie.
"I am planning to meet with the Riverworks people (soon) on this. It will be a little different, but still a lot of fun," Fowler said.
She explained the Riverworks complex would also be utilized for the event's after-party and awards presentations. Race information remains incomplete at this point, with details still to be ironed out.
Still more happenings announced include the Alexa Foundation's new, custom-designed website, www.ithappenedtoalexa.org, which came to be following IHTAF being named the recipient of a $10,000 grant from the Firespring Foundation.
"It was an amazing process that also led us to a change in our logo, but it has come to fruition with an absolutely beautiful website," Fowler said. "We couldn't be more thrilled with how it came out and look forward to growing and showcasing our work on this beautiful new site."
She added yet another exciting event - the Alexa Foundation's third annual Raising the Stakes gala fundraiser - will take place Saturday evening, Sept. 29, at the Sheraton at the Falls. Stay tuned for details.
In closing, Fowler commented on the pending move from Lewiston - a community she said the Alexa Foundation has grown to know, be part of and love for over 15 years. She called it "bittersweet" and said, "Lewiston is our home. It is where we grew up. We owe a lot to this community."
She noted Alexa Foundation founders Tom and Stacey Branchini, who are currently wintering in Florida, intend to remain Town of Lewiston residents.
Categories
Home feature NFP Sentinel Sentinel feature Sentinel HP Feature List
comments powered by Disqus