Sat, Jan 13th 2018 07:00 am
LPD announces plans to hold active shooter drill at Lew-Port
By Terry Duffy
Editor-in-Chief
The Town of Lewiston got down to business for 2018 on Monday, with two public hearings, a host of reorganizational adoptions, approvals and appointments, followed by a light agenda work session.
Both leadoff public hearings went off without comments.
One was to allow for amending and adopting of local law 360-29 (B), namely rezoning changes in the town code from R-1 (single residential) districts to R-2 (medium density) districts to accommodate a plan for LMK Realty to build up to 15, two-unit, one-floor patio home residences on the northeastern side of North Ridge Drive from Legacy Drive, west toward the West Eddy Drive/Lauren Court crossover.
The other was to continue an ongoing moratorium covering the disposal of sludge, sewage, and septage (biosolids) on town lands. The moratorium went on to be extended an additional nine months as the town monitors ongoing litigation in the Town of Wheatfield and its local law covering use of biosolids, which Lewiston has been considering.
As noted, the first hearing had no public comments. In board discussions thereafter, following a suggestion by attorney for the town Ryan Parisi to finalize the measure next month, Charles Grieco, attorney for developer Dominic Massaro of LMK Realty, requested the Town Board act that night. Namely, he sought action on a request to move state environmental quality procedural items as part of the pending town agreement. This included approving parts 1, 2 and 3 toward a negative declaration, adoption of the aforementioned local law, and designating Lewiston as the lead local agency.
"As a matter of procedure ... before the board approves the local law, the board has to make a determination of SEQR," Grieco said. "I believe you have the basis to do that. ... Those same reasons that would support the rezoning support the negative declaration, in the case. The issues about being consistent with the character of the community, not having significant traffic impact, all those sorts of things."
"You could do it tonight," Parisi said.
He added that, once the board approved SEQR parts 1, 2 and 3, and accepted a negative declaration as having no adverse impact on the area, the matter could be moved ahead.
All measures, including various binding agreements between the town and developer, went on to be approved by a 5-0 vote. As it proceeds, the town's Planning Board will review all pertinent matters relating to the project. 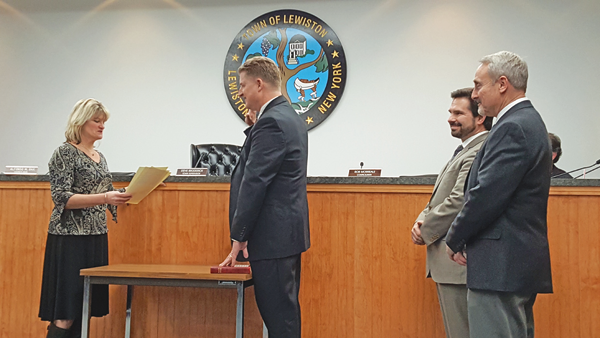 Town of Lewiston Supervisor Steve Broderick stands first in line to take the oath of office Monday from Town Clerk/Tax Collector Donna Garfinkel as part of the Town of Lewiston reorganization session. Behind him, council members John Jacoby and Al Bax await their swearing-ins. 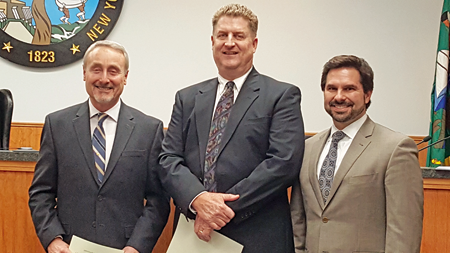 Jacoby, Broderick and Bax gather for a photo. (Photos by Terry Duffy)
Moving on, the Town Board went on to approve a number of reorganizational matters. Included were:
•Setting Town Board regular meeting and work session schedules. A notable change this year was the board's option to discontinue holding work sessions in the warm weather months. As such, no work session meetings will be held in June, July and August.
Regular Town Board meetings will be held at 6 p.m. Mondays on Jan. 22, Feb. 26, March 26, April 23, May 31, June 25, July 23, Aug. 27, Sept. 24, Oct. 22, Nov. 26 and a tentative final board/audit session on Dec. 27. Work sessions will take place 6 p.m. Mondays on Feb. 12, March 12, April 9, May 14, Sept. 10, Oct. 11, Nov. 15 and Dec. 10.
The setting of joint meeting dates of the Town Board/Lewiston Village Board of Trustees was not finalized on Monday.
The board announced agenda items for consideration at all board sessions must be submitted to the town clerk's office by 4:30 p.m. on the Wednesday prior to the meeting.
•The town's approved 2018 holiday schedule is as follows: Jan. 15, Martin Luther King Jr. Day; Feb. 19, President's Day; March 30, Good Friday; May 28, Memorial Day; July 4, Independence Day; Sept. 3, Labor Day; Oct. 8, Columbus Day; Nov. 12, Veterans Day; Nov. 22-23, Thanksgiving Day holidays; and Dec. 24-25, Christmas holidays.
•The board named KeyBank and M&T Bank as the town's official depositories, and designated the Niagara Gazette as the official town newspaper for legal notices, and the Lewiston-Porter Sentinel as the official secondary newspaper for display ads and notifications.
•The following officials were appointed by Supervisor Steve Broderick as liaisons for 2018: Board of Ethics/ex-officio, Parisi; building inspector, Councilman Al Bax; Cable Commission, Councilman Bill Geiben; CWM Siting Advisory Committee, Bax; Engineer, Geiben; Environmental Commission, Bax and Geiben; Fire Bureau, Broderick and Councilman John Jacoby; Highway/drainage, Bax; Historical Preservation, Jacoby; Justice Court office, Broderick; Lewiston Council on the Arts, Jacoby; library, Jacoby; Lighting Advisory Board, Councilman Rob Morreale; Niagara River Region Chamber of Commerce, Broderick/Geiben; Modern CAC, Bax; Parks and Recreation Advisory Committee, Morreale; Personnel Committee, Geiben; Lewiston Police Department, Bax; town/village police liaisons, Broderick and Bax; Planning Board, Morreale and Bax; recreation, Morreale; risk manager, Broderick; Sanborn Business and Professional Association, Broderick and Geiben; senior citizens, Geiben; Signage Committee, Morreale, Tower/Wind Energy Research Committee, Jacoby; water, Broderick; Water Pollution Control Center, Bax; and zoning, Bax.
Bill Conrad was reappointed as deputy supervisor for 2018. Conrad was also named as chair of the Planning Board. Anita Muzzi was named chair of the Zoning Board of Appeals.
Other Town Board appointments for 2018 include: attorney for the town, retaining the law firm of Seaman Norris LLP, represented by Parisi at a contracted rate of $65,000; engineering services, GHD Consulting Services, represented by Robert Lannon; grant writer, Rotella Grant Management, represented by Bernie Rotella; stormwater management officer, Chris McAuliffe; minority business officer and women's business officer, Town Clerk Donna Garfinkel; electrical inspectors, New York Atlantic Inland Inc.; and records appeals officer, all Town Board members.
Still more Town Board actions including adoptions saw appointments to various boards, commissions and committees. These can be found online at www.townoflewiston.us.
Wrap-up news of note from the board's work session included:
•The Town Board approved authorizing $132,415.45 for the purchase of Badger meters for the Water Department as it continues replacements of residential water meters for town water customers.
•Lewiston Police Chief Frank Previte announced the LPD would participate with other local agencies in a full active shooter drill Jan. 26 on the Lewiston-Porter School District campus (when the district is not in session). Previte said the drill would involve LPD and partnering agencies, fire and EMS.
"It's going to be a full-scale drill ... that we've been working on for some time with them," he said.
•Town Building Inspector Tim Masters reported 600 building permits were issued in 2017 under the town's new building code procedures, a change he said has increased the cost of a new home in the town by $12,000.
On a related note, Masters said the town issued 25 permits in new builds in 2017.
Categories
NFP Sentinel Sentinel HP Feature List