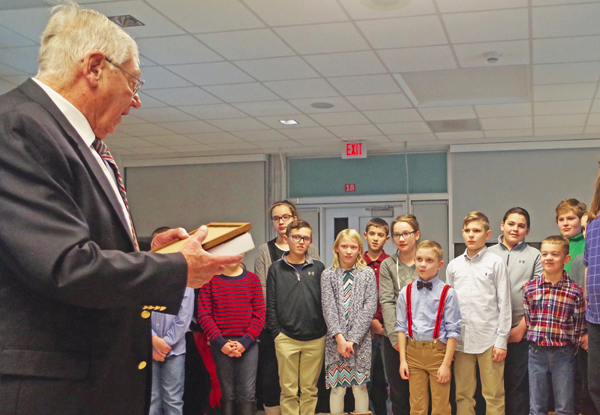 Veteran Richard Pealer talks to Grand Island Central School District student prior to presenting them with a flag that flew over the Capital. (Photo by Larry Austin)

Sat, Jan 13th 2018 07:00 am
Korean War veteran Richard Pealer returned to Buffalo after a Buffalo Niagara Honor Flight to the National World War II Memorial in Washington, D.C., with a special message from Grand Island students. Tucked into his luggage was a handmade note that thanked him for his service to his country.
Deeply touched by the personal note from the children, Pealer, a Niagara Falls resident, decided to give back to the Grand Island Central School District to let them know just how special the message was.
"I was so impressed by the children. It was absolutely beautiful how much more their contributions added to the trip," said Pealer.
Buffalo Niagara Honor Flight, a hub of the National Honor Flight Network, recognizes American veterans for their sacrifices and achievements by flying them to Washington, D.C., to see their memorial at no cost.
Pealer made the trip in September 2017. Before his group returned back home, handmade cards created by area school children were distributed to each veteran.
Kathy Brown, a GICSD special education teacher who has volunteered for the past year as secretary and chair of the veteran mail for the Buffalo Niagara Honor Flight, led the effort within the school district to have students create cards. She reached out to her teaching peers to ask for "thank you" cards and letters for the veterans going on each of the flights. Grand Island elementary, middle and high school students have created letters and cards for the last five honor flights.
Taking the request even farther was Mary Jane Fonte, family and consumer science teacher at Veronica E. Connor Middle School. As part of class, her students baked muffins and packaged them with red, white and blue ribbons and messages.
"I looked over many of these letters and cards and they were so endearing," said Brown. "Many cited family members, including their own parents who were veterans, and they all expressed sincere appreciation for all the service they gave to ensure our freedom. Some of these letters brought tears to my eyes because of the true hearts revealed in these letters."
Pealer felt the same way. As a token of his appreciation for the student-created messages, Pealer presented an American flag to the Grand Island Board of Education on Jan. 8. The flag, which had previously flown over the U.S. Capital Building, was purchased by Pealer. Some of the students that created the cards and letters led the pledge of allegiance at the BOE meeting.
Pealer, who sailed around the world during the nine years he was in the U.S. Navy, purchased flags for the Grand Island School District, Hillview Elementary in Lancaster and a Bradford, Pennsylvania, school. He said he did a little detective work to track down each school and mailed flags to Hillview Elementary and the Pennsylvania school.
"My father was a World War II veteran who died before being able to see the WWII War Memorial," said Mrs. Brown. "This is my way of honoring my father's sacrifice for his country. He fought in the Battle of the Bulge and wound up with frozen feet, which plagued him all the rest of his life. My goal is to help the BNHF get as many WWII veterans to Washington, D.C., to see this memorial and let them know how much their service to our country means to America."
The next Honor Flight mission flying out of Buffalo will be held on April 14. A few Grand Island students have been at the airport for past send-off and welcome-back ceremonies, but the 4:30 a.m. departures and 10:15 p.m. arrivals are a little too early and late for most students.
Categories
Dispatch Dispatch feature NFP Top News Features