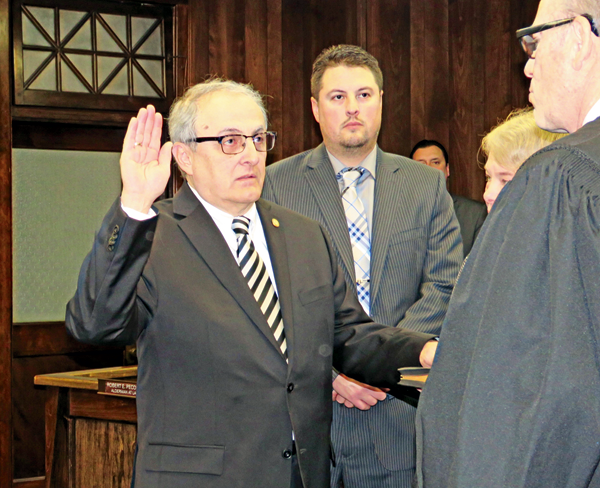 Fri, Jan 5th 2018 03:10 pm
Pappas sworn back in as mayor, Tylec enters as newcomer to council
By David Yarger
Tribune Editor
As the clock turned to 2018, North Tonawanda rang in the New Year by swearing in elected candidates from November. In front of a sizable crowd at North Tonawanda City Hall, citizens welcomed city leaders with rounds of applause once sworn in. Officials sworn in included, Mayor Arthur Pappas, City Attorney Luke A. Brown, Alderman at Large and newcomer Austin Tylec, Alderman of the first ward Mark Berube, Alderman of the second ward Donna L. Braun, and Alderman of the third ward Eric Zadzilka. Also sworn in were Niagara County officials including, Coroner Joseph V. Mantione, Eighth District legislator Richard L. Andres Jr., and Ninth District legislator Randy R. Bradt.
Pappas was excited to get back to work with the council and said he's looking forward to 2018.
"I think the people in the community voted the way they felt was the best way to vote," Pappas said. "We have a new council member; I'm looking forward to working with him, as well as the rest of the council. We've received tremendous support from the community, as could be seen here today, and as the pastor mentioned, we have a diverse council, we have a diverse community and the city seems to be moving in a positive direction and we have a lot of plans for the coming year. We have a lot of irons in the fire, so to speak, and we're just planning on keeping North Tonawanda moving ahead, and we thank everyone for their support."
Pappas also said he's excited to hear new ideas from Tylec as the newcomer to the council.
"We work very well together and I don't see anything different happening with Austin. We'll have some new ideas too, and working together is what keeps the city moving in the right direction. The key is communication. As long as the mayors office, council, and the community communicates together well, I think that we can have nothing but success," Pappas said.
Tylec was excited to begin working with the council and said he's grown to know the group.
"I've met them over the past two years now, so I think we know a lot about each other and, although, we may have differences in party opinions, it's a great way to have a mix; it's a diverse group of people, like they said and it's always about trying to keep balance in the city," Tylec said.
Tylec added he plans on getting to work quickly, with plans of upgrading the city website, getting meetings broadcasted on the website and other various endeavors he has.
The Hon. Shawn Nickerson was master of ceremonies. Nickerson also administrated several oaths. Other administrators of oaths included, the Hon. Joseph J. Cassata, Pastor Chad Rieselman, John Tylec and Jessica Fields. Rev. A.W. Moldenhauer led the invocation, while Rieselman ended with a prayer and benediction. 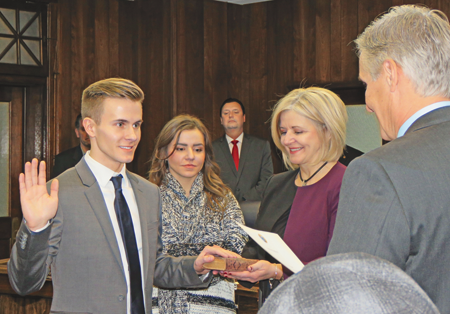