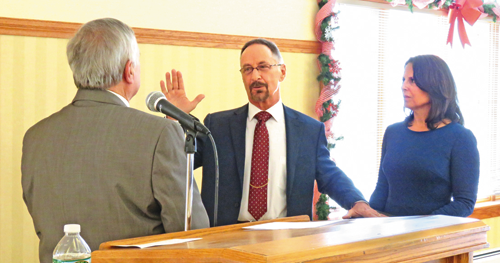 Town Supervisor Don MacSwan, alongside his wife, Mary, was sworn into office by Bill Ross.

Fri, Jan 5th 2018 03:10 pm
MacSwan, Doktor sworn into office as newcomers to Town of Wheatfield board
By David Yarger
Tribune Editor
When the New Years Eve ball dropped to signify the start of 2018, it also signified change. As people began setting New Years resolutions to change lifestyles, the Town of Wheatfield also adjusted to change.
On New Year's Day, the Town of Wheatfield swore in several elected officials for various positions in the town and county. The event also marked the start to the Don MacSwan era as town supervisor.
In front of a vast amount of citizens and officials, outgoing Supervisor Bob Cliffe gave a farewell address to the crowd, thanking several individuals and wishing the best for the town.
Cliffe, who finished his eighth year as supervisor, along with many more as town justice, decided to retire from politics this year, stating he fulfilled his planned eight years as supervisor.
Cliffe began his speech with a Bible verse, Ecclesiastes 3, saying, "To every thing there is a season, and a time to for every purpose under the heaven." Cliffe followed saying, "My season has come to a conclusion and I really feel good about that."
Cliffe then said, "It's now Don's time, and I hope and trust that he's going to bring both, his ideas and his heart, to this position."
Cliffe also cited retirement to spend time with family and really have time to himself.
"I haven't had time to spend with family and haven't had to do some of the things that I like to do, and it's time to get started on the bucket list, as well," Cliffe said.
Cliffe took time to thank town board members, Budget Director Ed Mongold, and several others around him for everything through the years. He also praised his wife for his success.
"She knew how to run a campaign, she knew how to work with voters lists, she helped with what I had to say and helped me write the materials we put out there. I never would've won my first race had it not been for her and that's what led me on to the course of the last 22 years. So, yeah, she's to blame for my success," Cliffe said.
Following Cliffe's speech, Pastor Bob Heisner led invocation. Family Court Judge Erin DeLabio followed by swearing in David Godfrey and Rebecca Wydysh as Niagara County legislators. Next, DeLabio swore in Town Councilman Randy Retzlaff, while newcomer Curt Doktor was sworn in by Cliffe.
Doktor, an avid Buffalo Bills fan, revolved his speech around quotes from Bills legends such as Marv Levy and Jim Kelly and Bills Owner Terry Pegula.
"Jim Kelly, one of my favorite Bills of all time said, 'I plan to tackle this challenge head on with toughness, perseverance, and faith.'... As I start this journey, I know it's not always going to be easy. But, what I do know for sure, is that I'm gonna give it my very best," Doktor said.
Doktor also thanked several people, including Cliffe. He said, "It just seemed fitting that you would be the one to swear me in. Bob has encouraged me over the years to get more involved. He introduced me to a lot of people in the Town of Wheatfield over the years and I really appreciate that. I've learned an awful lot about what it is to be a leader just by watching Bob. ... Thank you for all your service to the town as justice and as supervisor. Most of all I want to thank you for seeing something in me and believing in me."
Following Doktor, MacSwan was sworn in by Bill Ross. MacSwan thanked Ross for being there for him and said he hopes he can be as good a leader as he was. MacSwan also praised the direction the town is on and said he's ready to keep it that way.
"I look forward to working with the residents of the Town of Wheatfield and I feel that with our board that we have, we have a good group of good people I've known for years, I think we'll do the right thing for all the residents of Wheatfield," MacSwan said.
The ceremony ended with a blessing of the food by Heisner, which was followed by a luncheon put on by the town. 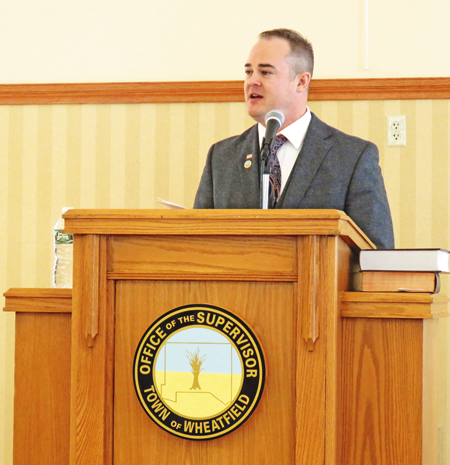 Curt Doktor speaks at the podium after being sworn in as a member of the Town of Wheatfield Town Council on New Year's Day. (Photos by David Yarger)
Categories
NFP Tribune Tribune HP Feature List