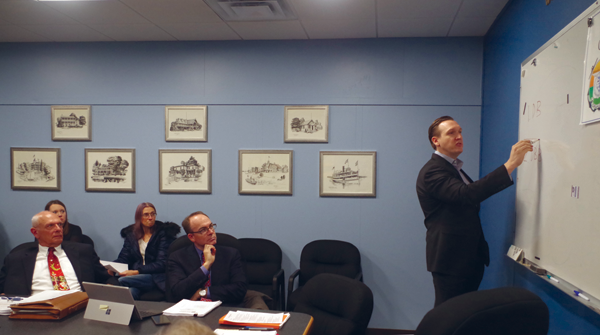 Town Supervisor Nathan McMurray draws on a white board in the Town Hall conference room as he tries to describe the difference between "design-build" and "design-bid-build" in building a new community center. (Photo by Larry Austin)

Sat, Dec 23rd 2017 07:00 am
By Larry Austin
Island Dispatch Editor
The Grand Island Town Board couldn't resist holding its last meeting of 2017, and the last meeting of the terms of two councilmen, without a lengthy argument.
In the last council session for outgoing councilmen Ray Billica and Chris Aronica, the board voted 3-2 Monday to approve issuing a request for proposal for a community center, with Chris Aronica, Ray Billica and Mike Madigan voting "Yes" and Nathan McMurray and Bev Kinney voting "No."
The vote followed a more than 30-minute discussion and sometimes heated argument in a work session before the regular meeting.
Billica, who moved to issue an RFP during the regular meeting, described his motion in the work session saying the town should "Say to the people out there who are interested in building it, 'Here. That's kind of like what we want. What can you give us? What's it going to cost? Where are you going to put it?' "
After the town hired a consulting firm, Clark Patterson Lee, to conduct studies and public input sessions to gauge the wants and needs of the residents, Clark Patterson Lee came back with a recommendation for a possible project.
McMurray said the consultants determined the public supports building a turf field/sports complex, opposes moving the Golden Age Center, and needs more public space for culture, recreation and meetings.
Council members didn't dispute the consultants report on that score. Billica said, "I think we're at a point to say, 'OK, here's what we believe we would like to see in a community center, generally, not specifically."
His recommendation was to go to potential developers and say, "What can you design for us? What's it going to look like? What's it going to include? What's it going to cost? Where's it going to be? And thank you very much."
McMurray argued that the town followed that procedure before, which he called "design-build" ("You design it, you build it," McMurray said), when a maintenance building was constructed on private land, leased, and later purchased, by the town.
McMurray said that after talking with the town attorney and Clark Patterson Lee, the "strong overwhelming feedback is it's a dangerous approach."
He said the design-build approach leads to bid-rigging and a tendency for a company to "value-engineer" the project and cut corners because "their profit comes from how much they can squeeze out of the design."
McMurray preferred a second strategy he called design-bid-build, which entails hiring an architect to design the building, and then put it out to bid. The architect would then oversee whomever is chosen to build the project.
Categories
Dispatch Dispatch feature NFP