Fri, Dec 15th 2017 09:00 pm
The Kiwanis Club of Niagara-Wheatfield's Student Leadership Program clubs have been busy with different projects serving and aiding their community during the Thanksgiving and Christmas season. The Niagara-Wheatfield Kiwanis sponsors four individual SLP's within the Niagara-Wheatfield school district; K-Kids at West Street, Colonial Village and Errick Road elementary schools and a Builder's Club at Edward Town Middle School.
The K-Kids of West Street Elementary School recently participated in Niagara-Wheatfield High School's sponsored "Adopt a Christmas Tree" project. The kids were asked to decorate a tree with a theme. The K-Kids chose to make a "candy treats tree," decorated with chocolate ornaments. The Builders Club at Edward Town Middle School also participated in the Christmas tree project. All the adorned, ornamented trees were auctioned and afterward given to families within the district that are unable to furnish a tree.
The K-Kids of Colonial Village organized and collected foods, and created Thanksgiving boxes to be distributed to less fortunate families of Colonial Village and the district at-large. The K-Kids of Errick Road Elementary School created "Candy Grams for Cancer." Students and staff were able to purchase a candy gram and send it to fellow students and staff for 50 cents. Each candy gram had a fun size piece of candy attached to it. Through this project, $500 was raised for Roswell. The candy grams really helped spread joy and fellowship throughout the school. 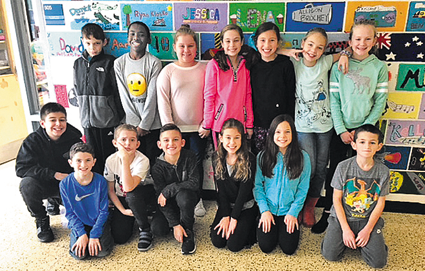