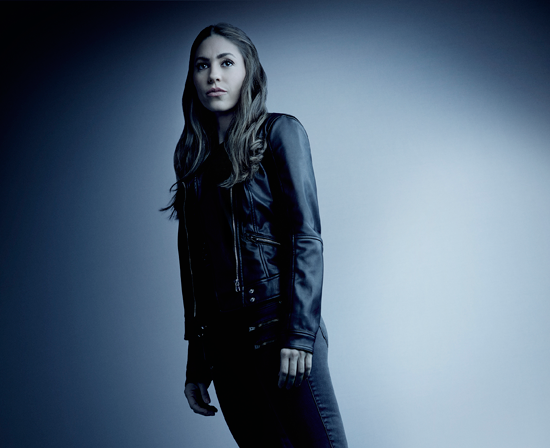 by jmaloni
Fri, Dec 1st 2017 08:15 am
Season 5 of ABC show begins ... in space
Behind the Screens with Joshua Maloni
One of the hallmarks of ABC and Marvel's series "Agents of S.H.I.E.L.D." has been the incorporation of Inhumans - a secret society of people with special powers (meta-humans) activated by terrigenesis. These Inhumans have been the basis for several storylines, tied into ancillary plot points from the Marvel movies, and even spawned a spinoff series of their own.
That said, many of the Inhumans introduced on the original ABC program have departed - disintegrated, been ingested, blown up or otherwise phased out. One, however, recently joined the full-time cast.
Natalia Cordova-Buckley (Elena "Yo-Yo" Rodriguez) was promoted following the success of the six-part digital series "Marvel's Agents of S.H.I.E.L.D.: Slingshot" (in which she starred), as well as the positive fan reaction to her character's romance with Henry Simmons' Alphonso "Mack" MacKenzie, and Yo-Yo's heroic, tear-jerking rescue efforts inside the "Framework" at last season's end.
It's been quite a ride for Yo-Yo, who debuted halfway into season three. In her debut episode, she appeared to be a Colombian weapons smuggler. In fact, Yo-Yo even kidnapped Mack. But as the story unfolded, it was revealed she took weapons to keep them from corrupt law enforcement - and Yo-Yo made up with Mack (who gave Elena her nickname).
In subsequent episodes, Yo-Yo - who can move at the speed of light in the timespan of one heartbeat (like a yo-yo) - teamed up with the S.H.I.E.L.D. agents to fight Hydra, Hive and the Darkhold-powered life-model decoy Aida.
Yo-Yo has struggled with the bureaucracy of S.H.I.E.L.D., and the stigma of being an Inhuman. Ultimately, though, she's fought to protect the innocent and to defend her friends and fellow agents.
When season five begins (8 p.m. Friday, ABC), Yo-Yo and the team are beginning a new chapter - in space.
Chatting a few days after her birthday (which was good), at home under the weather (which was bad), Cordova-Buckley detailed how she became one of the "Agents of S.H.I.E.L.D.," and what it means to be a full-fledged cast member. An edited Q&A follows. 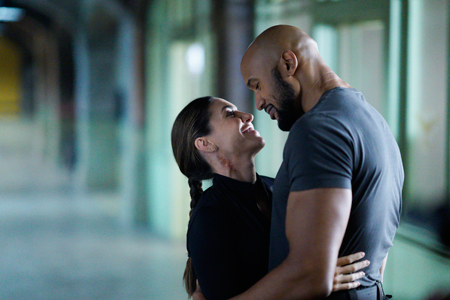 "Marvel's Agents of S.H.I.E.L.D.": "Yo-Yo" and "Mack" share a moment together. (ABC photo by Jennifer Clasen)
Q: I've been a fan of "S.H.I.E.L.D." since the beginning, but even more so in the past year as I've watched other sci-fi and comics shows. I've really grown to appreciate the acting, writing and general direction. How did you get connected with it?
Natalia Cordova-Buckley: It's the show that changed my life forever as an actor - you see, I'm sick and I'm going to check choked-up talking about it! "Agents of S.H.I.E.L.D." changed my life, and the people in it. ... There is great work being done on the show.
I got connected to the show, interestingly enough, Maurissa Tancharoen, who's our creator, boss, warrior woman extraordinaire, she was really dear friends with my manager when they were real young. (But) that's not how we got connected. Like any other process, I got called in for the audition ... and I did the audition, and then I got called in for the callback. I did the callback and, then, two days later, they called me to say I had gotten the part.
And what was lovely is that Maurissa got to call my manager, Aida, and tell her, 'Girl, remember me?' And they've known each other since they were like 16. And she was like, 'Your girl is our choice.' And it was them kind of finding their friendship again, and then me getting the role of a lifetime - because Yo-Yo has been the role I'll never forget.
And I went in for the table read, and I met this wonderful family. ... From there it's just been magical.
Q: I was watching an interview you did for "Slingshot," and there, like now, you do get emotional when talking about Yo-Yo. Why is she so special to you?
Natalia Cordova-Buckley: I've been very outspoken about struggling with living in a world where a female voice is not respected or applauded as much as another voice. Where I was raised (in Mexico) in a very abject society. Being a strong woman wasn't something that I got applauded for; it was something that I sort of got rejected for. ...
With the knowledge that now we're gaining this freedom in our voice, it makes me very emotional that the first role that I ever got in the United States - like a meaty role, because I had done a couple things before - like an actual role that I can sink my teeth in - it was a character that represented everything I wanted to be as a young girl - and wasn't very much allowed to be. So, it's a bit of the universe saying to me, "You can do this for others, that you didn't find for yourself."
It definitely is true that she's healed me. Playing Yo-Yo has allowed me to be everything I wasn't allowed to be a lot of the time, and be very special. ...
I'm just happy that I can give that to little girls and young Latina girls that are maybe being told what I was told, which was, "You look prettier when you're quiet." They can see Yo-Yo and say, "No! I can be Latina and strong and have a will about me and beliefs and principles, and my ethics can be grounded to myself, and act upon them, and, even if I get judged, continue to be that way." ...
It's been very significant to me.
Q: Yo-Yo was introduced with a number of other Inhumans. Those other characters have either been phased out or other things have happened to them in the storyline. But you were promoted to be a series regular. Yo-Yo is the one who has stayed with us. What does it mean to you to have the support of the showrunners?
Natalia Cordova-Buckley: It's profoundly significant, firstly because it says - and I don't mean to sound egocentric - but it says a lot about me, and about who I am as a person and as an actor, to come in as just a couple of episodes player, and be able to make it to series regular. Firstly, that's very heartwarming to me, because I try to be the best I can be everyday. And clearly the seeds that I've planted are now blooming, and so that makes it profoundly special.
And then it's, again, going back to representation and showing people out there that if you work hard enough and you do your best and you come in and give your full potential every day, that things will happen - and that we can change things for ourselves. ...
I say it all the time: I felt like I was part of the family from day one, because "Agents of S.H.I.E.L.D." truly has an incredibly special cast and crew, and I think they are a reflection of our leaders. Our leaders are incredibly kind, good-hearted humans, and the people they choose to become part of the family reflect that. So, it's an honor to be part of that family. 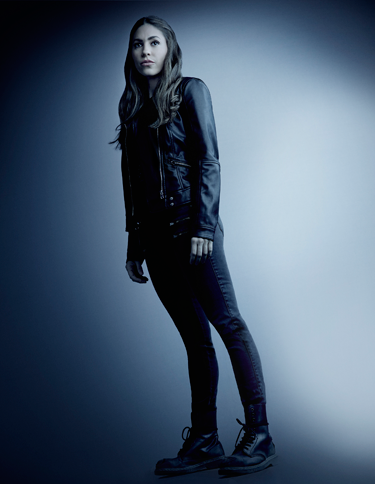 Natalia Cordova-Buckley stars as Elena "Yo-Yo" Rodriguez on "Marvel's Agents of S.H.I.E.L.D." (ABC photo)
ABC described "Slingshot" as Yo-Yo "struggling to balance the restrictions of the recently instituted Sokovia Accords (as introduced in 'Captain America: Civil War'), the worldwide agreement that regulates and tracks those with super powers, with a personal mission she's desperate to fulfill," which was to avenge the murder of her cousin, Francisco.
The series was Emmy nominated and earned two Webby Awards.
Q: One of the things "S.H.I.E.L.D." does so well is that it keeps all of the characters engaged in the plotline. It's obviously a big cast. Of course, with "Slingshot," that show was on your shoulders. You were the lead on a series that was a favorite with fans and critics. What can you tell me about that experience?
Natalia Cordova-Buckley: I'm profoundly grateful for "Slingshot."
It's interesting, the whole "lead" thing. I've always understood from a young age ... we can't survive as well by ourselves. Everything we do here is part of the team. To me, God is in all of us. That's part of my spirituality. So, even if I know in a script or in a story that I carry or that I'm the lead, of course there's the responsibility and whatnot, but I just never forget that I am no one without the people under me.
I would never have gotten "Slingshot," and I would never have gotten out there as strongly if Clark (Gregg), Chloe (Bennet), Henry, Lil (Elizabeth Henstridge), Iain (De Caestecker) and all of them weren't in it. Because they built this fandom - and not just them, but the crew and the producers, ABC, Marvel. They built that infrastructure that "Slingshot" stands on. ...
I'm just proud and grateful to have been part of it, and extremely, extremely grateful that Marvel, ABC and "Agents of S.H.I.E.L.D." would have the belief to allow me to carry that. I hope they continue to have that belief in me.
"Marvel's Agents of S.H.I.E.L.D." premieres at 8 p.m. Friday on ABC. For more, visit http://abc.go.com/shows/marvels-agents-of-shield. 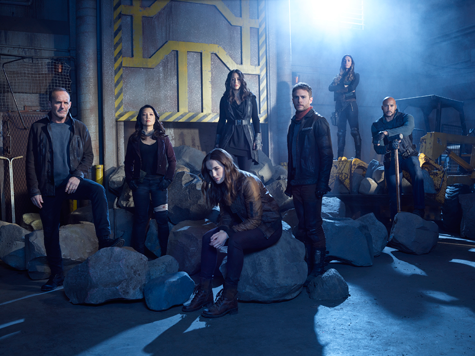