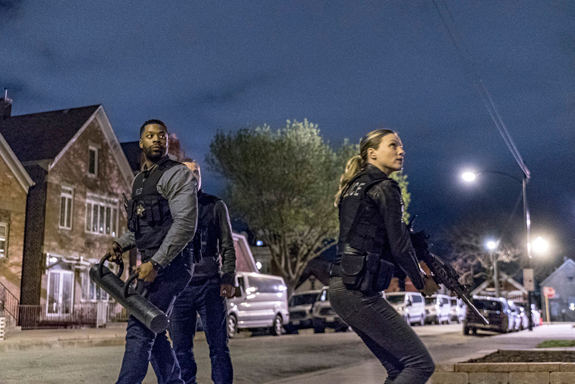 "Chicago P.D.": Pictured in the "Fork In The Road" episode are, from left: LaRoyce Hawkins as Kevin Atwater and Tracy Spiridakos as Hailey Upton. (NBC photo by Matt Dinerstein)

by jmaloni
Fri, Sep 29th 2017 07:00 pm
Behind the Screens with Joshua Maloni
If you're a fan of NBC's "Chicago P.D.," then you were disappointed to learn in Wednesday's season premiere that Erin Lindsay (Sophia Bush) had, in fact, left for New York and wasn't coming back.
You were slapping your forehead and saying, "Oh, come on!" when Denny Woods (Mykelti Williamson) returned - and was promoted, no less. He is now in the position of advocate, or overseer, particularly of Det. Sgt. Hank Voight's (Jason Beghe) Chicago Police intelligence team.
But then you were also cheering when you learned Hailey Upton (Tracy Spiridakos) had joined the team, and the cast, on a permanent basis.
NBC made the announcement official over the summer, following the actress's three-episode stint last season.
It's a good thing, too, because Hank is going to need all the help he can get this season. His unit has recently come under intense scrutiny over his officers' handling of suspects and conduct in the field.
While that may sound a little too much like real life, relax: "Chicago P.D." tells stories that are entertaining, and filled with engaging characters, while also being socially conscious.
There are many changes afoot in the "Chicago" universe, with NBC's decision not to renew "Chicago Justice," but rather to work some of that's show's characters into the "P.D." storyline. Most notably, Antonio Dawson (Jon Seda) has rejoined the intelligence unit.
Then there's the addition of Spiridakos, who rose to stardom behind her breakout lead role in "Revolution." On that series, she showed grit and determination while trying to topple nefarious post-tech-apocalypse regimes. She was tough, but vulnerable, as Charlie.
Casting her as Upton, a straight-laced, no-nonsense detective who made her bones undercover, was inspired. Yes, this character and Charlie are different in myriad ways, but, for those who watched both shows, they'll associate the actress with being able to hold her own physically while having a moral code and a strong sense of purpose.
"I'm thrilled to be a part of this cast," Spiridakos told BTS in a phone interview Friday. "I came on last season for a few episodes and then got an offer to stay, which is amazing. Getting to come on last season and meeting everybody - and I feel this character is really interesting - I really had a good time getting to explore, and getting to know her during those three episodes. And so now I'm thrilled to be a part of it even further, and getting to know a little bit more - and getting to show the audience a little bit more of her backstory, and a little bit more of who Upton is, and what she's all about."
Spiridakos said she was familiar with "Chicago P.D." before signing on, and it shows. In just four episodes, it feels like Upton's been a part of the team since day one.
"I just really like the dynamic between all of them, and I thought it was an interesting show, and I really like (producer) Dick Wolf's projects in general. So, I'm stoked to get an opportunity to be a part of that group," Spiridakos said.
An edited Q&A follows. 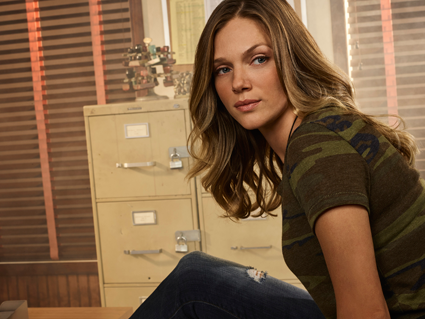 "Chicago P.D.": Tracy Spiridakos as Det. Hailey Upton. (NBC photo by James Dimmock)
BTS: Having seen you on "Revolution" and "MacGyver," I was a fan of your work, and I thought it made a lot of sense for you to come on "Chicago P.D." last season. But I'm surprised at how quickly you integrated with that cast, and how seamlessly you integrated with that cast. What do you think the key to that is?
Tracy Spiridakos: I don't know, honestly. (Laughs) It's been wild how we all have gotten on so well together so quickly. The first day, when I first came on, I get a bit shy and quiet. They were just all so welcoming and so lovely that I came on and I just felt instantly comfortable. I felt like I was welcomed there, and wanted there, by all of them. And so, I think it's them that allowed me to be myself and allowed me to have fun there with everybody, which then allowed us to bond further and just have such a great dynamic with everybody. I've got to give props to them for welcoming me the way that they did.
BTS: You mentioned that we're going to see more of your character's backstory. What can you tell us about that?
Tracy Spiridakos: One of the things that we'll get to see is Upton is not there to make friends. That's kind of my biggest thing that I love about her is that she's a straight shooter. She'll tell you what she's thinking, and she doesn't care if you like it or not. She's there to do a good job. She's passionate about what she does. I love that so much about her.
We definitely get to see a lot more about who she is, and how she handles herself.
BTS: This is another show that you're working on with a giant cast. You've got so many talented people around, and everyone's such an integral part of this story. What do the producers and the writers on this show do to ensure that everyone brings value to the table, and there are no throwaway characters?
Tracy Spiridakos: I think it's exactly what you just said. I think it's the writers' and the producers' goal to make sure that the characters are developed in an interesting way and everyone has something interesting to bring to the table. I think that the credit goes to them in allowing us all to - our characters to develop and to be an interesting and important part of the whole family of this show.
BTS: I'm wondering if you're relieved to be on a show that is less spoiler-heavy? When you were on "Revolution," I'm sure you were always hit-up for details and "What's going to happen!" "What's going to happen?" And you'd be like, "I can't say! I can't say!"
Tracy Spiridakos: (Laughs)
BTS: Is it nice to be a show that relies less on that kind of thing?
Tracy Spiridakos: You know what's funny? I think I've been so well-trained from "Revolution" now that I get nervous so say anything! (Laughs) Everything was you couldn't tell very much, so now that's just integrated into my brain. So, whenever I can give certain things away - I was on an interview a little while ago, where ("Chicago P.D." publicist) Matthew (Mitchell) had connected us, and I was like, 'I don't know? Can I say that? I don't know! I don't know what I can say.' (Laughs)
Yeah, it's nice to not be too concerned about it, but I think, again, I still feel like I need to be protective of the stories in general. I don't know if that's just in me now.
BTS: All right, I know you're well trained up, but let's see if maybe I can crack you a little bit. Where we left off last season, and what see saw in the season premiere, the intelligence unit members are under tremendous fire - even for them. What can we expect in the first few episodes?
Tracy Spiridakos: I think that we'll see how the reform affects the intelligence unit, and how that impacts all the different characters. And then, my character butts heads with Ruzek. That's going to be coming up soon. There's a situation that happens, and a disagreement with how it's handled.
BTS: You're like, "They will fight crime in Chicago."
Tracy Spiridakos: (Laughs) I know! I'm the worst.
"Chicago P.D." airs at 10 p.m. Wednesdays on NBC (WGRZ Channel 2).
Follow Joshua Maloni on Twitter @joshuamaloni.
WATCH: 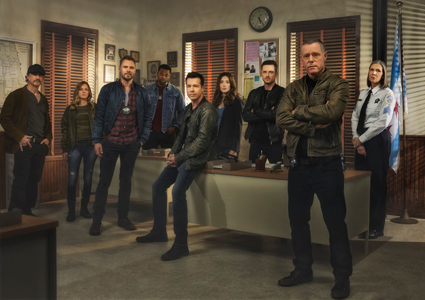