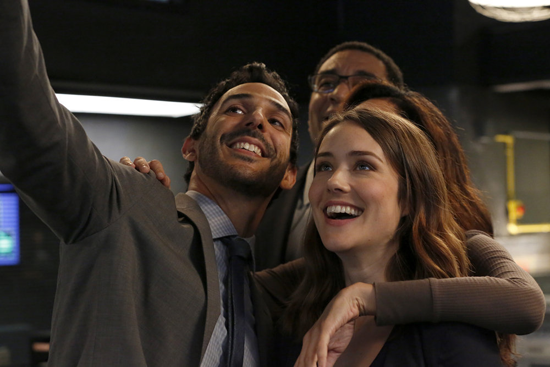 "The Blacklist": A scene from the upcoming "Miss Rebecca Thrall (No. 76)," episode 503. Pictured, from left: Amir Arison, Harry Lennix, Megan Boone and Mozhan Marnò. (NBC photo by Will Hart)

A lighter 'Blacklist' in store for fans this season

by jmaloni
Thu, Sep 28th 2017 04:25 pm
Harry Lennix interview
Behind the Screens with Joshua Maloni
Managing Editor
After last season's "holy crap!" of a finale, "The Blacklist" returned Wednesday with a lighter, funnier episode.
It was, to say the least, a welcome (and needed) respite.
Consider: As season four concluded, Raymond "Red" Reddington (James Spader) had survived an attempted coup courtesy of his former protégé, the now-deceased Mr. Kaplan (Susan Blommaert); an unearthing of his past crimes at the hands of FBI agent Julian Gale (Enrique Murciano); and FBI agent Elizabeth Keen (Megan Boone) discovering he is, in fact, her father.
In the season five opener, Red, the world-renowned "concierge of crime" - a marvelously menacing miscreant - was delightfully broke. Having lost his fortune thanks to Mr. Kaplan's dirty work, Red was in need of a job (he partnered with a bail bondsman and two ex-circus members), a place to live (though he seemed to be enjoying his D-grade motel - community happy hour, in particular) and some assistance from Lizzy, who was still wrapping her brain around her lineage.
As Red and Elizabeth took a roadtrip to apprehend a sort-of-not-really-"Blacklister," hijinks, mischievous threats of murder (as only Red can offer), and family bonding ensued.
The episode's tone was different, but then, so was the timeslot - 8 p.m. Now airing at a more family-oriented TV time, "The Blacklist" will have to curtail the violence somewhat - though, if the season premiere's final minutes are any indication, the show's signature suspense will remain fully intact. Namely, there is a suitcase filled with bones, which Kaplan sent to Elizabeth upon her death, and Tom Keen (Ryan Eggold) is ... uh, we're not sure. He seems to have had a premonition about an untimely ending. On top of that, FBI agents Aram Mojtabai (Amir Arison) and Samar Navabi (Mozhan Marnò) are dating, and Donald Ressler (Diego Klattenhoff) is dealing with his role in the death of Laurel Hitchin (Christine Lahti).
Sheesh.
The man keeping everyone and everything in line is FBI Assistant Director Harold Cooper.
Harold has had to endure a lot in four-plus seasons. Namely, he was poisoned and tricked into believing he was dying; his wife had a fling with the neighbor; and his job is almost always at risk, thanks to his working with Red, who, in the pilot, became an informant so as to keep an eye on Elizabeth.
Star of stage and screen Harry Lennix plays Harold. The Chicago-born actor first appeared on pop culture radars when he portrayed Lock, one of Morpheus's crewmembers, in "The Matrix Reloaded" and "The Matrix Revolutions." Lennix also appeared in the Superman reboot, "Man of Steel," as General Stanwick.
Lennix chatted with BTS this week. The following is an edited version of the interview. 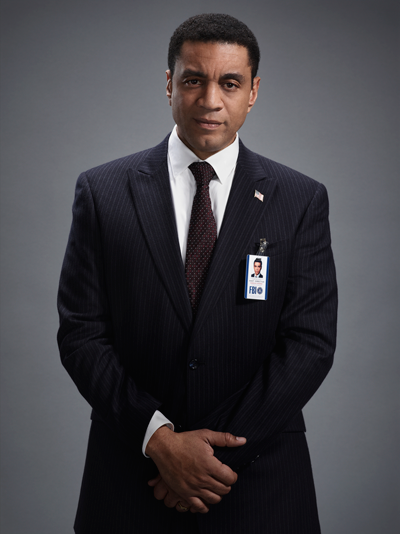 Harry Lennix as Harold Cooper (NBC photo by Patrick Ecclesine)
BTS: It certainly seems the show might be a little lighter and maybe even a little funnier this season, especially with a new timeslot this time around.
Harry Lennix: I think so. In the scripts that I've read, I see a little more levity - and I think that's something that is a breath of fresh air to the cast. I hope that's it's so, as well, to the viewing public. I think we've earned the right to breathe a little. (Laughs) To have some fun. I think there's enough darkness in the world, and so forth now - there always is - but I think as Red is getting back his balance this season, he's getting his feet back under him, that it's a reset. That pushes a reset button.
BTS: It's interesting that you said "a breath of fresh air." I find there are many things about this show that are a breath of fresh air. So many shows remain stagnant or don't achieve any progress until the very end. This show has evolved; it's flipped so many different scripts and offered some significant reveals. That's fun for us as viewers. What are the advantages of that for you as an actor?
Harry Lennix: The thing I love about this show, in particular, is that there's so many rabbit holes that you can go down. If you wanted to follow any particular person's storyline for a little while, a person on the other end of it, if you went home from the office with Cooper or Aram or Ressler, it would probably be pretty fascinating.
I don't know exactly what's happening in their lives, as an actor or character, but I do believe that the writing on the show - the way they've constructed the characters - they all seem to have a deep well of significance and care and concern and lives. And I think the great benefit of having longevity on this show is that we'll unspool some of that and take everybody along with us. I don't think there will be any disappointment in going down any particular road.
BTS: Harold has gone through a lot, with his supposed illness, his wife's affair and his constant job insecurity - not to mention all that Red has put him through. Yet, we never feel sorry for him. He always maintains his poise. Throughout all of this, he's a leader and is always willing to take one for the team. I find that your portrayal of him through all of these circumstances is really remarkable. What is the key to maintaining a character's strength and integrity and respect while in the midst of all this turmoil?
Harry Lennix: Where I get my chief source of how to play it comes from my brother (who was 30 years in law enforcement), and knowing that, in leadership positions, you have to keep your head when, all about you, other men are losing theirs and blaming it on you. I think that that is the definition of leadership. It's calm - or apparent calm - rational decision-making, at least - in the midst of the critical situation. That's what he's trained to do. That's what he's there for.
And I don't, in any way, try to make him heroic. I just try to make him efficient. And I think, in doing so, and also having a template to base the character on, things get filled in. I don't have to do a whole of dancing, so to speak, to bring poise to the character. It's inherent in the writing. And so I just try to do honor that. ... I try to make it as realistic as possible.
BTS: I know you're limited as far as what you can say about upcoming episodes, but if you were pitching this show to new audiences, what hints or teasers can you give us? What are some of the things we can look forward to in the first few episodes now that you guys are back?
Harry Lennix: One of the things is that you mentioned the tone. I think it's changed. I think it's also watching Red in the position where he actually doesn't have any resources he once had, and has to reassemble those. And, to some extent, is reliant upon (laughs), you know, he gets the blind eye from the FBI. But, to a certain extent, it's kind of tacit assistance. ... I think that's very different. I think it will lead to lots of interesting new characters.
And ... what's going to happen with those bones; why Tom has them, and what his relationship was to Kaplan. I don't know. But I sure want to find out!
"The Blacklist" airs at 8 p.m. Wednesdays on NBC (WGRZ Channel 2).
Follow Joshua Maloni on Twitter @joshuamaloni.

James Spader as Raymond "Red" Reddington, Harry Lennix as Harold Cooper and Megan Boone as Elizabeth Keen on "The Blacklist." (NBC photo by Will Hart)
WATCH: