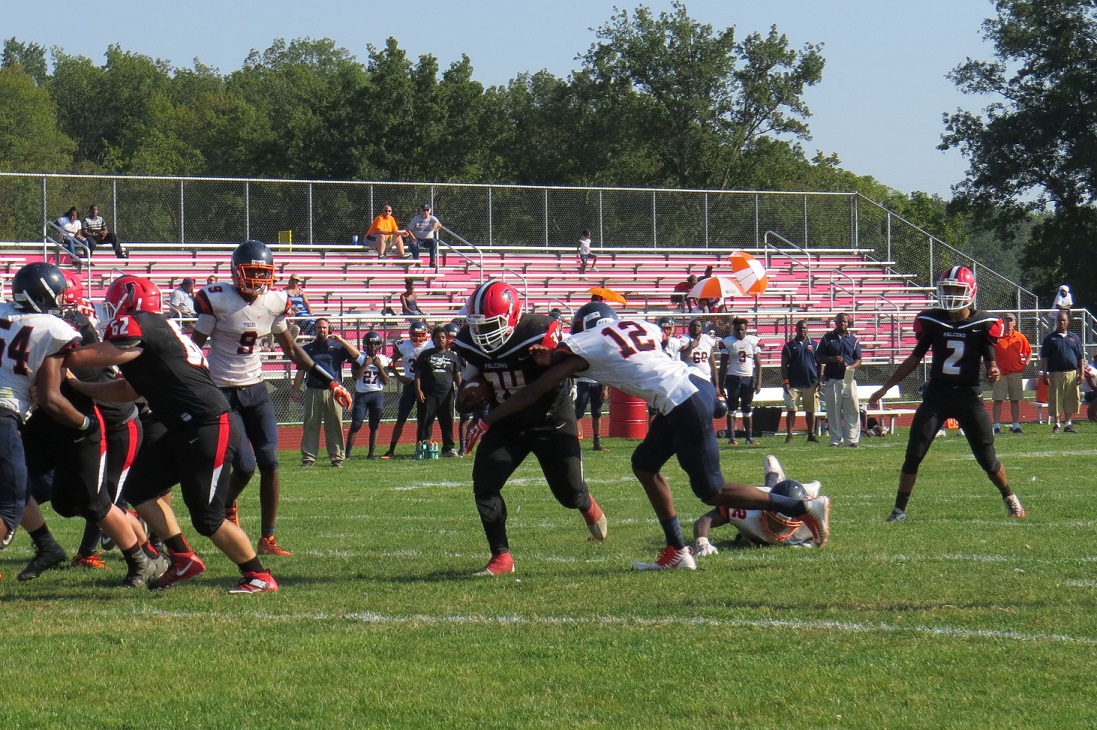 Josh Brown runs in for one of his three touchdowns.

Sat, Sep 23rd 2017 07:45 pm
Brown's big game pushes Falcons to win over reigning Class A Champions
By David Yarger
Tribune Editor
Niagara-Wheatfield's defense has had a tough start to the season, giving up over 40 points per game. On Saturday, the script was flipped.
The Falcons defeated the reigning Section VI Class A champion Bennett Tigers, 28-20, on a unusually hot September day at Terry Harvey Field.
In a game the Falcons needed to win to stay in the playoff hunt, Coach Russ Nixon was pumped up for his team's showing.
"It feels great to accomplish a goal we set out at the beginning of the week," he said. "We looked at this game and the standings in AA and we said, if we can get our second win in AA, we can control our own destiny."
In the season preview with Nixon, he said his goal was for the offense to run the ball and run time off the clock. That's how the offense operated vs. Bennett.
The Falcons received to start the game and embarked on a 13-play drive that lasted over six minutes. The drive ended with a Josh Brown 1-yard touchdown run.
Bennett came back though. After an Aaron Smith 37-yard pass, he finished the drive with a QB sneak into the end zone.
After both teams missed the two-point conversion, the score was 6-6 after one quarter.
In the few times the Falcons threw the ball, it was effective. On a third and nine play, Jordan Parks found tight end Kenny Jungier for a big gain to the Tigers 20-yard line. Brown finished the drive off, once again, bulldozing in from five yards out. After a successful two-point conversion, Wheatfield regained the lead, 14-6.
After sacking the quarterback twice on defense, the Falcons forced Bennett to punt and give it back to their offense.
Thomas Peltier came in for an injured Parks and found Jake DeWolf for 33 yards. On the next play, Parks re-entered and found Jungier in the corner of the end zone, who dove and caught the pass for a 15-yard touchdown. The two-point conversion was good and Wheatfield led, 22-6.
The Falcons dodged a bullet in the winding seconds of the first half, as an Smith 80-yard touchdown pass was called back due to a holding. The Falcons took the 22-6 lead into the half.
Bennett came out firing in the second half, as their first drive lasted three plays and less than two minutes for a Semaj Clemons 28-yard touchdown run. The two-point conversion was no good and Wheatfield still led, 22-12.
The score didn't bother the Falcons offense. On a third down play, Peltier took a pitch from Parks and threw it to Jungier for a 15-yard gain. Brown followed with a 33-yard run to get into Bennett territory and a play later Nick Stott rushed for 17 yards. After a Noah Bennett 14-yard run on third and 12, Brown ran it in, once again, from five yards. The two-point conversion was no good, but the Falcons led, 28-12.
Bennett refused to go away, as Smith threw a 33-yard touchdown to Jakari Nettles, and after a successful two-point conversion, the Tigers cut the lead to eight, 28-20.
In the fourth quarter, the Falcons were forced to punt. Punter Brandon Higgins pinned the Tigers at their own nine, and then it was up to the defense to finish.
Bennett got into Falcons territory after just three plays. On a third and three play, Smith found his receiver in the back of the end zone who made a miraculous one-handed catch but was already out of bounds when the catch was made. On fourth and three, Bennett had no choice but to go for it. The Tigers tried to run it up the middle, but Brown was there to stop the running back in his tracks and force a fumble, which he recovered.
Stott's 16-yard run put the game on ice, and after two kneels in the victory formation, the Falcons pulled off the upset, 28-20.
On a day where conditions were hot and muggy, Nixon said he was pleased with his team's ability to push through it, knowing there will be games like this, and noted the preseason preparation that helped.
"That's why we flipped a lot of tires in August," he said. "We know that these are gonna be the games and my message after was, look, the rest of our schedule are playoff teams, so let's make the most of it, let's make some noise."
On Brown's big game, Nixon said, "He's a big man and when he gets moving he's tough to bring down. I said it's like having Jerome Bettis in the backfield on those goal line situations."
Brown racked up 106 yards and three touchdowns on 18 carries. Jungier finished with three catches for 66 yards and a touchdown. Defensively, Antonio Conklin has two sacks, while Cody Guiliani added a sack. Mike Ziegler and Josh Thibeault led the team with eight tackles, each.
After giving up an average of 43 points per game in the first three games, Nixon was happy to see his defense of nine juniors and two sophomores come out on the good end of big plays on Saturday.
"It's huge confidence for the defense," he said. "We know we're young, but we know they're talented and they can do it. It's a matter of being in the right spots, playing physical and making the tackles... but again, to cut our points against in half, we know what our offense is capable of doing and that's what we've been telling them. Give our offense a chance. If we can give them a chance and hold teams to 20 points, we think we have a chance."
The Falcons' schedule doesn't get any easier, as they head to Lancaster on Friday. The Legends are currently ranked No. 10 in Class AA in New York state, according to MaxPreps.
The battle in Lancaster is at 7:30 p.m. on Friday. 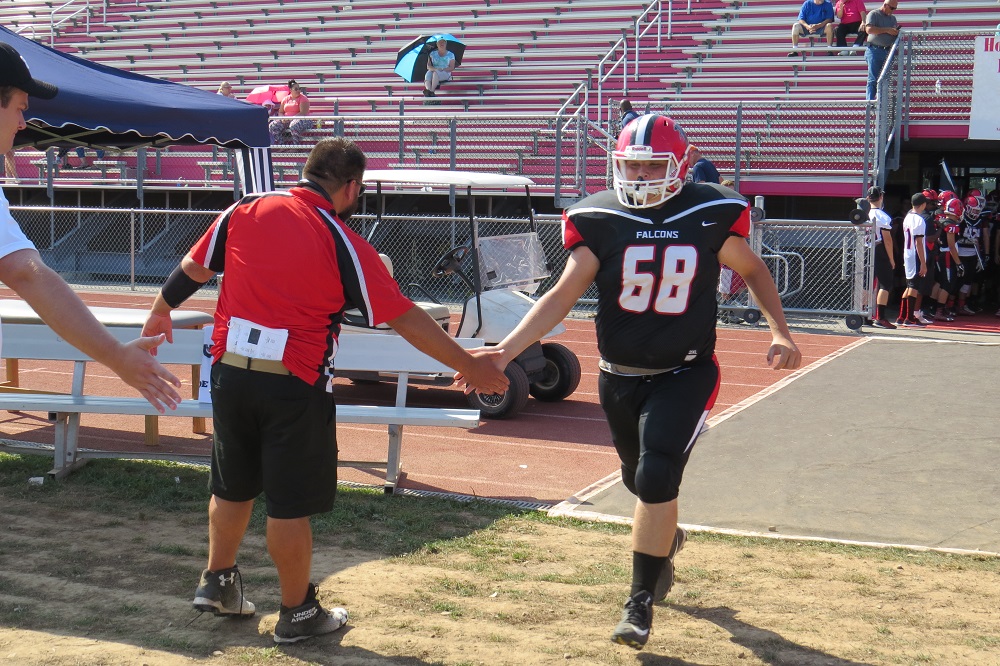