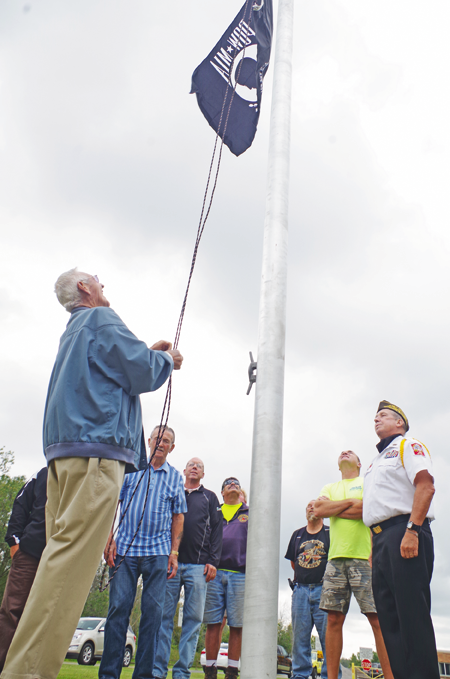 Sat, Sep 16th 2017 07:00 am
Because every public building needs the Stars and Stripes, new flagpoles were set up at the town's highway garage recently.
Past Grand Island highway superintendents Norm Mrkall and Ray Dlugokinski had the honors Aug. 31 of raising flags for the first time on the new poles in front of the garage on Whitehaven Road. Also on hand for the occasion were members of the Color Guard of the Pfc. Charles N. DeGlopper Memorial Veterans of Foreign Wars Post No. 9249.
"Two years ago, we were talking and brought up the point that the facility is a public building and we needed a flag. We should have a flag out here," Deputy Highway Superintendent Dick Crawford said. Highway Superintendent JT Tomkins said the department "put the hunt out for flagpoles," and found two thanks to Highway Department employee Joe Zito.
"We purchased the two for less than the price of one of this size, 25-foot high," Crawford said.
Zito sanded the flagpoles and painted them. A solar light was purchased as well.
VFW's Dan McMahon said the flags are new, courtesy of the VFW.
"It's good to see, with the fact that today people are trying to tear stuff down, cover stuff up, paint things up, it's good to see an organization such as the town put something up to represent the United States and the freedom we have today," McMahon said. 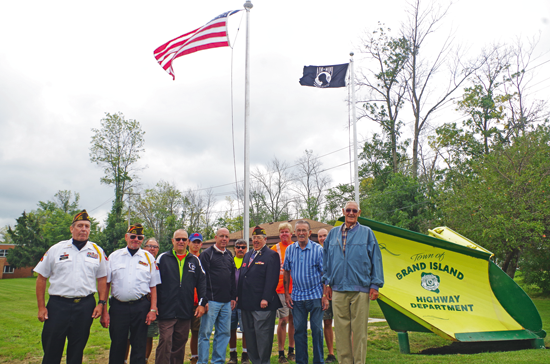 Members of the Town of Grand Island Highway Department, past and present, and members of the Color Guard from the DeGlopper VFW Post raised flags on new poles in front of the highway garage on Whitehaven Road.
Categories
Dispatch Dispatch feature NFP