Paddles Up! participants begin to paddle from the beach at Beaver Island State Park. (Photos by K&D Action Photo and Aerial Imaging)

Sat, Aug 5th 2017 06:55 am
By Alice E. Gerard
The 12th annual Paddles Up!, held on July 29 at Beaver Island State Park, was highlighted in the Waterkeeper Alliance's seventh annual Splash series of events. Waterkeepers Alliance is a grassroots organization that is comprised of 300 Waterkeeper organizations and affiliates.
According to Sam Hakim, communication coordinator for the Buffalo-Niagara Riverkeeper, "The Splash series of events is a nationwide program, presented by Toyota." This is the first year that Paddles Up! was included in the series.
"Paddles Up! is a really incredible event," Hakim said. "It does a fantastic job in highlighting the recreational activities that Western New York and the Niagara/Buffalo area have to offer."
This year, according to Grand Island Recreation Department Supervisor Joe Menter, participation in Paddles Up! set a new record, with 311 participants in the two eco tours around Strawberry and Motor Islands and the late morning two-mile paddle around the shores of Beaver Island. Last year, 210 persons participated in Paddles Up, which Menter had described then as being in line with previous years, with attendance between 200 and 220 paddlers.
Grand Island Town Supervisor Nathan McMurray said, "This is a record year. We're growing the eco tours. The water is clear. You cannot live without fresh water. It is more precious than gold and oil."
Paddlers on the eco tours had the opportunity to get a close-up view of Strawberry Island, which, along with Motor Boat Island, still exists because of ongoing work to repair damage to the islands. Reconstruction commenced in 1993, and the project was financed by real estate investor Frank Levin, who was one of several speakers prior to the launch of the late morning paddle. He and his wife, Jeanette, said that they came to support the event.
"Strawberry Island is now a safe haven for fish and wildlife," Frank Levin said. "It is a peaceful place to see a habitat for eagles. Wear your life jackets and have a good time."
Gregory Stevens, chair of the Niagara River Greenway Commission, said that the event is about the "habitat and health of the water and the land. We are eight years into a 50-year project. We love the kayakers. Have fun. Today is about you."
"Paddles Up! was very exciting," said Mark Thomas, Western District director of New York State Office of Parks, Recreation, and Historic Preservation. "We had good weather and threatened rain. Record numbers attended. The event is growing every year, which is exactly what we want to see happen."
National attention to Beaver Island State Park also came by way of "Paddle," an e-magazine produced by the American Canoe Association. Tina Spencer, a park educator with the New York State Office of Parks, Recreation, and Historic Preservation, was named the June kayak instructor of the month. "I've taught kayaking for the last five years, and I've kayaked for the last 15 years. I love teaching. It is opening people's minds to new experiences and making sure that they are safe," she said. "Today, we are letting people try out a kayak for free. A kayak travels low in the water. You can sneak up to the wildlife and see everything. It's all worthwhile when you see the smiles on people's faces."
Laura and Jeff Liebel of WEKANU, an organization that specializes in teaching kayaking and canoeing, offered a safety demonstration, with a variety of canoes and kayaks, at Paddles Up! Laura, an ACA certified level two instructor trainer, said, "We offer instructor certification workshops. We trained several members of the Riverkeeper staff. They ran the eco tours. They were trained on helping people be better and safer paddlers, as well as connecting to the environment."
Ro Woodard, of the Marine Services Bureau of New York State Parks, emphasized safety in paddle sports. "Let's go out in our boats. Put on your life jacket and have a good time. We encourage people in kayaks, canoes, and in stand-up paddleboards to wear their life jacket. We want to paddle today and come home and paddle tomorrow. Wear the life jacket because someone on shore loves you."
Participants at Paddles Up! included people such as Dough Morash, of the Buffalo Maritime Center. "We build fiberglass kayaks and canoes with a wooden core. I've built boats for about four years, ever since I retired from Moog, in East Aurora." As a Moog employee, he worked on hardware for launch vehicles and satellites. One of the valves that he designed left the solar system. "My name is out there, somewhere," Morash said.
Paddles Up! is the result of cooperation between the Niagara River Greenway Commission, the Buffalo-Niagara Riverkeeper, the Town of Grand Island, and New York State Parks. 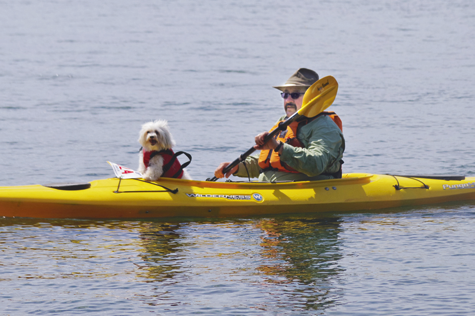 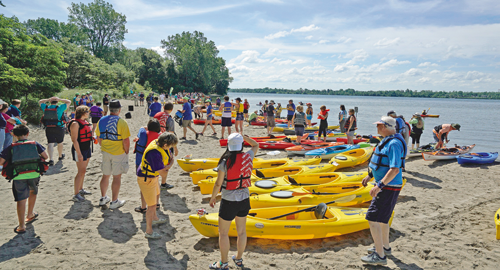