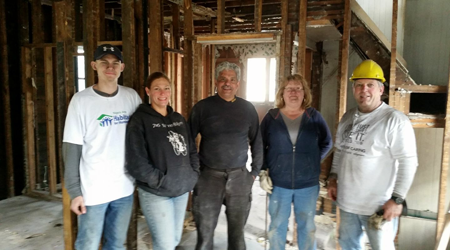 Sat, Jul 22nd 2017 09:00 am
By Lauren Garabedian
Niagara Area Habitat for Humanity is currently working to rehabilitate a house located at 2718 Orleans Ave., in the Cataract City.
Head leader Ricardo Flores said that, with help from volunteers and the community, the house is making progress. Flores has big plans for the renovations of the house, which, when complete, will include a new roof and porch, a living room and a kitchen. Upstairs will be two bedrooms, a walk-in closet and a bathroom. The basement of the house will be prepped with a new furnace, hot water tank and new appliances, and the backyard will be clean cut with access to an alleyway.
"When I started this project, there was a lot of furniture inside," Flores said. "My son, Ricky, and I emptied all the furniture and it took probably two-and-a-half days. It was like somebody just packed their bags and left everything else behind."
Flores, of Lewiston, a retired New York State Trooper, noted Habitat for Humanity strives to give God's people a way to build their community by providing homes to families and a shared sense of accomplishment.
"Their goal is achieving an aspiration from building a house to building communities," he said.
Community volunteers, including Niagara University's men's soccer team, Flores' own neighbors and family, the 107th Air Attack Wing from the Niagara Falls Air Reserve Station, Holy Trinity's youth group from Wisconsin, and other individuals have helped with the renovations of the house.
"The Niagara soccer team helped take down the chimney in the entryway," Flores said. "Some of them even got on top of the roof, and, boy, did they have fun."
The city has stopped by to check out the house and Flores has been busy making a floor plan that will have to be approved, while figuring out estimates. Some local construction sites are planning on donating equipment and time to help out on this project.
The house is being rebuilt from scratch. The kitchen floor has been torn up along with half of the roof, because of rotting from flooding. The house is being built into a viable living space from just the structure.
The Orleans Avenue home still has a long way to go, however Habitat for Humanity is looking for new homeowners, who have to qualify.
"We try to sell houses for a minimum amount someone can afford. But, the person that's buying the house can only have a family income no higher than $39,000," Flores said.
To apply for a house, volunteer or donate to this cause, visit www.niagarahabitat.org. 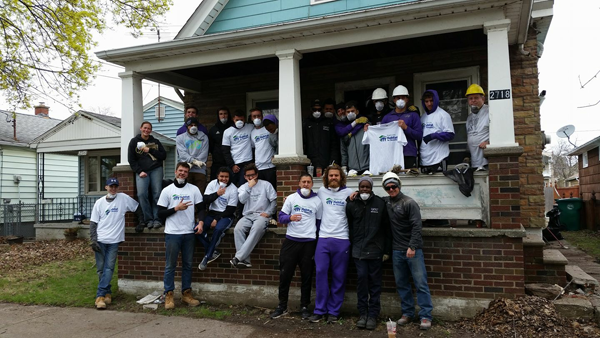 Shown is the Niagara Habitat for Humanity home rehabilitation project on Orleans Avenue. Community volunteers have been busy over past weeks gutting the dilapidated property and working toward renovation and a new Niagara Falls residence.
Categories
NFP Sentinel Sentinel HP Feature List