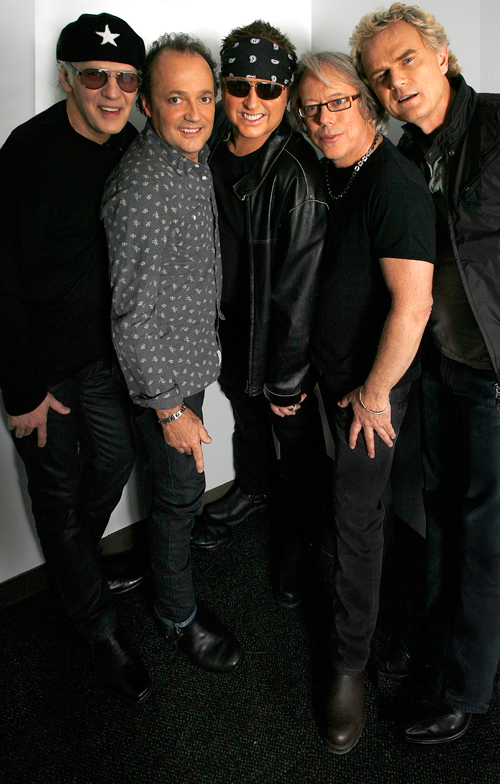 by jmaloni
Fri, Jun 30th 2017 06:55 pm
Doug Johnson interview
Preview by Joshua Maloni
Managing Editor
Vocalist Mike Reno met guitarist Paul Dean in 1979 and, just one year later, the duo had a hit record via their band, Loverboy. Working alongside Doug Johnson on keyboards, Matt Frenette on drums and Scott Smith on bass, Reno and Dean followed that up in 1981 with "Get Lucky." The album spawned the band's biggest hit in "Working for the Weekend."
Loverboy continued to record and tour through the remainder of the decade. Like many of their '80s contemporaries, however, the band lost much of its momentum in the 1990s with the rising popularity of hip-hop and grunge music. But the turn of the millennium saw a resurgence in Loverboy's popularity.
Reno, Dean and company (including Ken "Spider" Sinnaeve, who took over for the late Smith) took to the road for a 25th anniversary tour in 2005. Four years later, the band was inducted into the Canadian Music Hall of Fame.
Loverboy became a pop culture sensation thanks to commercials with companies including Taco Bell, RadioShack and National Car Rental - not to mention the current generation's fascination with the 1980s. The band shared stages with Rick Springfield, and The Romantics.
Last year, a trio of new tracks was released to the public: a country-tinged "Hurtin,' " the shuffling "Some Like It Hot," and the optimistic "Stop the Rain."
"We've been finding tracks that we have created in the past and, for whatever reason, they weren't selected originally; but they've been sitting in the vault," Johnson said in a phone interview this week. "We've resurrected some of these tracks, and we've found that, 'You know what? These are pretty solid little ditties. Why don't we put a compilation together - maybe throw some new stuff in there?'
"We do it for the fans. We do it for people that are interested in hearing what else the band did over the years."
Loverboy opted to forgo a traditional album process and instead release the songs digitally.
Johnson said the songs are geared more toward Loverboy's diehard fans. As such, they're not often performed in concert.
"You have to consider that people that come to see us, a lot of them might not be among the 300,000 people we have on Facebook or part of the inner circle of the Loverboy hardcore fan membership," he said.
It's for that reason, "We don't really play a lot of new stuff," Johnson explained. "We have the 'Dirty Dozen.' We've got these, essentially, 12 songs that we have decided that they're the ones that people, for the most part, want to hear consistently every night. Maybe once in a while we'll throw a variable in there, but it's a tried and true, giving maximum value to what our fans are kind of expecting from us.
"And, quite frankly, they're a fun batch of songs to play."
Songs in the "Dirty Dozen" include "Working for the Weekend," "Lovin' Every Minute of It," "This Could Be the Night," "Hot Girls in Love," "The Kid is Hot Tonite," "Turn Me Loose," "When It's Over," "Heaven In Your Eyes" and "Queen of the Broken Hearts."
"Everybody knows those songs," Johnson said.
Not only that, but, as he explained, Loverboy has mastered performing these songs.
"We're a live band," he said. "We don't do backing tracks. We just play everything. And we rely on our musicianship and the chemistry that we have on stage to kind of carry the show. ... We remain fairly true to the recordings.
"There's a certain timelessness to our songs," he noted. "(They've) obviously stood the test of time, because we're still here."
Loverboy will perform at Artpark in Lewiston on July 11 as part of the "Tuesdays in the Park" concert series. Kim Mitchell will join the band at the "Canadian Music Hall of Fame"-themed event.
Mitchell began with the band Max Webster before going solo and scoring with the song "Go for Soda."
Johnson said, "Kim is great. He's a great songwriter. ...
"He's been a mainstay of the Canadian music scene for years and years. And I, for one, have been a big fan. (He's) very creative. Great guitar player. Great songs. It's always a delight to play with Kim."
Tickets and set times can be found online at www.artpark.net.
Categories
Entertainment Sentinel TV and music