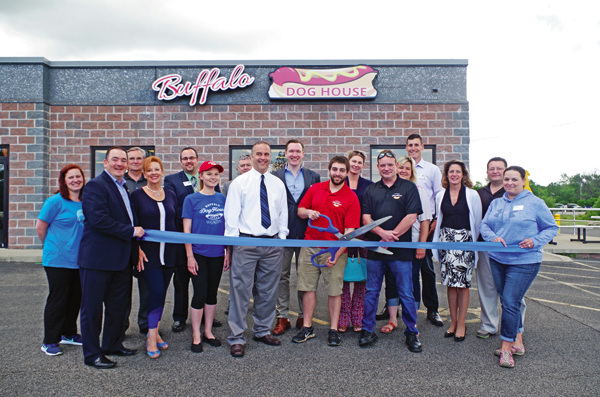 Grand Island Chamber of Commerce: Island Dogs are back

Sat, Jun 24th 2017 07:00 am
Buffalo Dog House opens on Grand Island Boulevard
By Larry Austin
Island Dispatch Editor
Islanders have missed their Sahlen's hot dogs so much that they were trying to order food before the new Buffalo Dog House even opened.
Mike Silla, co-owner of Buffalo Dog House restaurant, said he had 20 people a day coming in to eat at the new restaurant when he was still painting the interior. Silla, Jeff Lyons, Jim Sheridan, Debbie Silla and Ken Yensan own the new Buffalo Dog House, which held a ribbon-cutting ceremony just before opening for lunch Tuesday. The new eatery, located at 1752 Grand Island Blvd. where the old Theodore's hot dog restaurant was in business, is enjoying the most eagerly awaited restaurant opening since Mighty Taco.
After Theodore's went out of business, Grand Island Chamber of Commerce President Eric Fiebelkorn looked to some old friends at the Buffalo Roadhouse Grill to resurrect the location. One might say he pursued them doggedly.
Fiebelkorn, a personal friend of the owners, said he approached them because, "They have a history of running locally owned establishments successfully. ... This location was running VERY successfully."
Fiebelkorn said the old Theodore's closed only after it expanded off the Island. Theodore's closed suddenly, but June 5 a soft opening of the Buffalo Dog House gave the Island what it wanted.
"When we talked about making a mini-Roadhouse, we had people stopping in going, 'Are you making hot dogs again? We miss that so much.' Everyone on the Island misses this," Silla said. "It was cool to be able to bring it back."
The team of local owners that turned a closed chain restaurant into the successful Buffalo Roadhouse were looking to do the same on the Island.
"It's a similar story. It was a restaurant chain that closed, and it was an opportunity to take that and give jobs back to employees and reopen it. So I did a similar thing here that I did there," Lyons said.
Fiebelkorn said the Buffalo Dog House owners have the know-how in running a restaurant and will benefit from a highly visible location at the town's south entrance.
Buffalo Dog House is not an imitation of Theodore's. Lyons said Buffalo Dog House will have a Sahlen's dog cooked on a charcoal grill with the skin on the dog, but unlike Ted's and Theodore's, Buffalo Dog House will have a Texas hot, which is a skinless Sahlen's dog cooked on a flat top and topped off with a Texas meat sauce. Buffalo Dog House also has beer and wine, soft-serve ice cream, vegan dogs and burgers, and gluten-free buns. Patrons can also order a Dog Pound: a Texas hot, a char-grilled dog, a white hot Rochester dog, and a beef dog, all four for $12.99.
"So you can try one of all the kinds of local hot dogs," Lyons said.
The Buffalo Dog House owners could have served any type of food, but decided to stick to their Western New York roots.
"The first thought was to make this a mini-Roadhouse Grill," Lyons said. "But we looked at the equipment in the restaurant and the fact that the hot dogs were selling well, and the fact that pork hot dogs is a Buffalo thing. You go outside of New York and they've got beef dogs pretty much everywhere else you go. We liked keeping a Buffalo theme involved in it, and what's more Buffalo than Sahlen's hot dogs?"
They're also sticking with some of the same employees. Back is manager Maddie Porter, who Silla said came back on the job and didn't miss a beat. "She walked in and yelled at me, 'You're grilling wrong,'" Silla said, laughing.
Fiebelkorn said the opening of the new Buffalo Dog House will spur growth in the restaurant sector.
"These businesses on the Island, we need to support each other. If one does well, it doesn't take away from another, it usually augments. Three restaurants doing well is better than one," Fiebelkorn said.
Categories
Dispatch NFP Second Helping